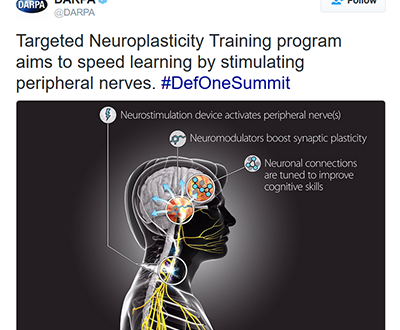 In March 2016, DARPA launched the Targeted Neuroplasticity Training (TNT) program, that seeks to advance the pace and effectiveness of a specific kind of learning—cognitive skills training—through the precise activation of peripheral nerves that can in turn promote and strengthen neuronal connections in the brain. TNT will pursue development of a platform technology to enhance learning of a wide range of cognitive skills, with a goal of reducing the cost and duration of the Defense Department’s extensive training regimen, while improving outcomes.

“Military personnel are required to utilize a wide variety of complex perceptual, motor and cognitive skills under challenging conditions,” said Dr. Robert Rennaker, Texas Instruments Distinguished Chair in Bioengineering, director of the TxBDC and chairman of the Department of Bioengineering. “Mastery of these difficult skills, including fluency in foreign language, typically requires thousands of hours of practice,” said Rennaker, who served in the U.S. Marine Corps. DARPA’s TNT program aims to develop an optimized strategy to accelerate acquisition of complex skills, which would significantly reduce the time needed to train foreign language specialists, intelligence analysts, cryptographers and others.

That kind of neural tuning can “influence cognitive state—how awake you are, or how much attention you’re paying to something you’re viewing or performing,” says Doug Weber, a bioengineer at DARPA who heads up the TNT project. If it works—if researchers can improve a person’s ability to learn—the DoD could reduce the amount of time spent training soldiers and intelligence agents. “Foreign language training is one of our primary application areas because it’s very time intensive,” says Weber. Language courses last more than a year, and only about 10 percent of trainees reach the level of proficiency needed for their jobs, he says.

Weber says he envisions intelligence agents or soldiers wearing some kind of noninvasive stimulation device that delivers precise electrical pulses as they practice their skills. And unlike caffeine or energy drinks, the stimulation can be turned off and, hopefully, causes fewer side effects.

The TNT program seeks to use peripheral nerve stimulation to speed up learning processes in the brain by boosting release of brain chemicals, such as acetylcholine, dopamine, serotonin, and norepinephrine. These so-called neuromodulators play a role in regulating synaptic plasticity, the process by which connections between neurons change to improve brain function during learning. By combining peripheral neurostimulation with conventional training practices, the TNT program seeks to leverage endogenous neural circuitry to enhance learning by facilitating tuning of neural networks responsible for cognitive functions.

DARPA is taking a layered approach to exploring this new terrain. Fundamental research will focus on gaining a clearer and more complete understanding of how nerve stimulation influences synaptic plasticity, how cognitive skill learning processes are regulated in the brain, and how to boost these processes to safely accelerate skill acquisition while avoiding potential side effects. The engineering side of the program will concentrate on developing non-invasive methods to deliver peripheral nerve stimulation that enhances plasticity in brain regions responsible for cognitive functions. The goal is to optimize training and stimulation protocols that expedite the rate of learning and maximize long-term retention of cognitive skills.

DARPA’s TNT efforts differ from the Agency’s previous neuroscience and neurotechnology endeavors by seeking not to restore lost function but to advance capabilities in healthy individuals. “DARPA is approaching the study of synaptic plasticity from multiple angles to determine whether there are safe and responsible ways to enhance learning and accelerate training for skills relevant to national security missions,” said Doug Weber, TNT program manager at DARPA.

TNT is part of a broader portfolio of programs within DARPA that support the White House BRAIN initiative.

THE research arm of the US military has discovered a way to increase learning speed by up to 40 per cent in a move which could lead to a generation of super soldiers. DARPA has demontrated how a non-invasive method which could massively boost learning speed

Their study, working with scientists from the HRL Laboratories in California, McGill University in Montreal, Canada, and Soterix Medical in New York, shows through a transcranial direct current stimulation (tDCS) – using magnets to stimulate a small area of the brain – device to stimulate the prefrontal cortex of the brain, learning speed was increased by 40 per cent.

The researchers tested their method on macaques and then prompted them to perform tasks in order to earn a reward. The monkeys that wore the device mastered the tasks to earn their reward in 12 trials, but those without took 21 trials, according to the research published in Current Biology.

Lead HRL researcher Praveen Pilly said: “In this experiment, we targeted the prefrontal cortex with individualised non-invasive stimulation montages. “That is the region that controls many executive functions, including decision-making, cognitive control, and contextual memory retrieval. “It is connected to almost all the other cortical areas of the brain, and stimulating it has widespread effects.”

DARPA, awarded multimillion-dollar contracts to eight university groups in April 2017 that will develop technology to enhance the brain’s ability to learn and speed up training process using electrical stimulation. DARPA’s goal is to enhance the learning rates by 30 percent at the end of the four-year program. Studies will be conducted on human volunteers and animals.

The teams awarded the research contracts will start with the vagus and trigeminal nerves. A team headed up by Stephen Helms Tillery, a neuroscientist at Arizona State University, for example, will study the anatomy and role of the trigeminal nerve—a cranial nerve responsible for sensations and motor function in the face.

Evidence suggests that this nerve complex has access to areas of the brain stem that release norepinephrine, a chemical associated with attention, and dopamine, a chemical linked to the brain’s ability to adapt. Helms Tillery’s team will study the anatomy and function of the trigeminal nerve in rhesus macaques.

Tillery’s team will also stimulate the trigeminal nerve in human volunteers to see how it affects behavior. In one experiment, with help from the U.S. Air Force Research Laboratory, volunteers will watch surveillance video and try to identify a person carrying a weapon. In another experiment, in partnership with a military research laboratory called USARIEM, volunteers will fire rifles at long ranges in a virtual shooting range while their behavior and performance are quantified.

Other TNT awardees are focusing on the vagus nerve—a major neural throughway that connects most of the body’s key organs. The vagus nerve travels from the base of the brain to the chest and abdomen, carrying a wide assortment of signals to and from the brain. It supplies the heart, lungs, digestive tract, pancreas and other organs.

Wright State is currently in collaboration with the Air Force Research Laboratory (AFRL), Vanderbilt University and Ibis Biosciences, and has received an award of up to $9.1 million from the Defense Advanced Research Projects Agency (DARPA) to improve learning using a handheld, low-power electrical stimulator, which is applied to the neck.

Researchers involved in the new Learning through Electrical Augmentation of Plasticity (LEAP) project believe vagal nerve stimulation can be used with healthy subjects to stimulate a change in neurons that increases the ability to learn. LEAP will improve the understanding of fundamental molecular mechanisms of nerve stimulation, in addition to studying the way genes are expressed, known as epigenetics. Epigenetics, meaning “upon genetics”, describes how environmental factors turn genes on and off, thereby changing traits.

DARPA is funding eight efforts at seven institutions in a coordinated research program that focuses initially on the fundamental science of brain plasticity and aims to conclude with human trials in healthy volunteers. To facilitate transition into real-world applications, some of the teams will work with intelligence analysts and foreign language specialists to understand how they train currently so that the TNT platform might be refined around their needs. The program will also compare the efficacy of invasive (via an implanted device) versus non-invasive stimulation, investigate how to avoid potential risks and side effects of stimulation, and hold a workshop on the ethics of using neurostimulation to enhance learning.

The first half of the TNT program focuses on deciphering the neural mechanisms underlying the influence of nerve stimulation on brain plasticity; discovering physiological indicators that can verify when stimulation is working effectively; and identifying and mitigating any potential side effects of nerve stimulation. The second half of the program will focus on using the technology in a variety of training exercises to measure improvements in the rate and extent of learning.

The institutions listed below are leading teams exploring aspects of using stimulation to activate plasticity.

Recognizing that these new technologies for learning and training could raise social and ethical issues, the TNT program is funding Arizona State University to host a national ethics workshop within the first year of the program. The workshop will engage scientists, bioethicists, regulators, military specialists, and others in discussion of those issues, and will produce for wider consideration a report on potential ethical issues relating to cognitive enhancement for warfighters. 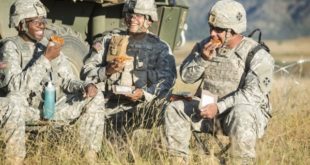 What exactly happens to the body in space and what are the risks? Are the …