Electromagnetic waves in the millimeter-wave band  (with frequencies between 30 and 300 GHz, or wavelengths between 10 and 1.0 mm) have attractive characteristics. One of their features is the wider usable frequency band compared with waves in the microwave band or lower bands. Another feature of using the millimeter-wave band is the fact that it becomes possible to design smaller and lighter equipment that utilizes that band. So it is useful to adapt millimeter waves for short-range broadband communication systems, high resolution sensing systems and radio astronomy.

The most attractive feature of millimeter waves, when compared with optical, infrared, and terahertz waves, is their ability to penetrate obstacles. And a spatial resolution higher than that achievable with microwave imaging sensors is possible. Therefore, they can be used under low-visibility conditions such as in fog, rain, dust, or fire, where optical or infrared cameras cannot be used.

These sensors are  useful for finding landmines, for offering all-weather vision, for detecting cracks in exterior walls, and for screening people for skin cancer. Researchers at Stevens Institute of Technology have developed a millimetre-wave imaging technique that can detect skin lesions and determine whether they are cancerous or benign. In future, they plan to incorporate the technology into a handheld device that will rapidly diagnose skin cancers without the need for biopsy (IEEE Trans. Med. Imag. 10.1109/TMI.2019.2902600). Since millimetre-wave imaging does not require tissue processing or staining, it can be performed promptly, enabling diagnosis of tumours at an early stage. A handheld scanner could also be used to generate real-time 3D images of tumours to guide surgeons, eliminating the need for multiple biopsies to fully remove cancerous tissue.

The imaging system uses millimetre waves (30–300 GHz), which penetrate up to 1.3 mm into tissue, making them highly effective for sensing pathological changes in different skin layers. To improve the resolution of the acquired images, the team developed an approach called “synthetic ultrawideband millimetre-wave imaging” to create an imaging system with a synthetic bandwidth of 98 GHz.

Their most promising application is for security. As the radiometric temperatures of an object are different depending on its metallic or dielectric properties  and its temperature, the sensors can detect concealed weapons or explosive materials. Consequently, these sensors have undergone test installation for use in security cameras at the entrances of airports  and buildings.

Millimeter-wave technology for application in security screening and imaging has been an area of intense research over the last few years because of the possibility to confer both acceptable spatial resolution (mm-level) and penetration of clothing and some packaging materials using non-ionizing radiation.

As is well known, atmospheric attenuation varies depending on its frequency, because electromagnetic waves are absorbed by O2 and H2O, and the resonant frequencies of these are different.  There  are low attenuation windows at 35, 94, 140, 220 and 360 GHz which are usually used for imaging sensors. Especially, the 94-GHz-band is often used because a high spatial resolution is possible due to its short wavelength (3 mm).

On the other hand, a passive imaging sensor receives incoherent millimeter waves emitted from the object. Passive imaging in the millimeter wave regime is fundamentally based on measurements of power received. from the scene, using radiometers (thermal radiation detectors.).  This power is a combination of what the scene object is directly emitting and what it is reflecting from its environment. The amount of power can be assigned a level within a gray scale to generate the image. The amplitude of the radiation depends on the object’s emissivity and temperature.

Since passive millimeter-wave imaging sensors do not need a millimeter-wave source, the system block is simple when compared with active imaging and it lies outside the scope of the Radio Law regulations.  Depending on the specific frequency of operation selected, passive imaging in the millimeter wave regime can be dramatically different when performed indoors or outdoors. Indoor imaging is dependent on natural emitters such as the warm human body to provide the contrast to see concealed weapons since everything in the image will be bathed in the radiation from the walls and contents of the room sitting at room temperature. In outdoor imaging, an important source of illumination is the down-welling of radiation from the sky above.

Since the radiation from the object is the thermal noise, its power is quite small. So the receivers need to have both low noise and high sensitivity. Whether imaging indoors or outdoors, the key to success is having a camera with sufficient sensitivity to detect small radiometric temperature differences, the minimum resolvable temperature (MRT) of the camera.

China is working toward replacing walk-through metal detectors for the use of millimeter wave scanners in security checks at airports to make these safety procedures more efficient and less intrusive. The millimeter wave scanner can detect metal and non-metal objects hidden under passengers’ clothes without touching them. The machine sends a signal that bounces off the skin and produces an image of the foreign object to a screen. The device transmits less than a fraction of the amount of a mobile phone’s radiation and thus is generally harmless to people.

A team of engineers at the University of Delaware has built and demonstrated a real-time mobile video camera that sees the environment through radio frequency (RF) waves as opposed to optical or infrared (IR) waves. In early demonstrations, the device has shown that using high-frequency waves enables it to ‘see’ through non-metallic objects and detect concealed objects. In December 2018, the university announced the team received USD1.5 million in funding from the US Department of Defense (DoD) to reduce the size, weight, and power (SWaP) of the device in preparation for a live trial in May.

The ability to make the device smaller is important, Dennis Prather, endowed professor of electrical engineering at the University of Delaware, told Jane’s . Typical imaging systems scale in three dimensions (3D) – they have a lens and have to be a certain distance from the focal plane. In an IR camera, or any kind of visible-light camera, the lens focuses the image onto film, or an electronic focal plane array, so they scale in 3D, Prather explained. “If I want to make a bigger lens, I have to make it deeper too, which means they scale volumetrically. If you can do it in a phased array like we do, it only scales in 2D, so it has a ‘pizza box’ scale factor as opposed to a moving box-scale factor,” he said.

That means Prather and the team can make a system that more closely resembles a flat-panel television (TV) set. “It will still be big in area because that is proportional to the wave length. You really can’t compromise that,” he added. “You can now imagine having an imager that is a RF video camera hanging on the walls much like a flat panel TV. That is the breakthrough we have been able to develop,” he said. Prather noted the team from the University of Delaware may be the only group in the world that has ever built a video camera that works in those frequencies from a phased array antenna system.

There are both active and passive designs and the NIST Security Technologies Group (STG) has research projects related to both. The STG, in collaboration with the NIST Quantum Electromagnetics Division, has developed a state-of-the-art passive millimeter-wave imaging system based on cryoelectronic sensor arrays. This system will be the basis for the development of NIST’s millimeter-wave imager metrology, including the development of test artifacts, test and evaluation protocols, and international documentary standards.

The system is designed to image stationary and non-stationary objects at video rates at a standoff distance of 10 m to 20 m. The system utilizes an f/2.0 Cassegrain optical system with a 1.3 m primary mirror. The light then passes into a cryostat and through a set of filters that define the 10% bandwidth, centered at 350 GHz. The focal plane is cooled to 950mK to facilitate the use of superconducting transition edge sensor (TES) bolometers. Figure 2 shows images from a video in which a weapon is concealed beneath a shirt. 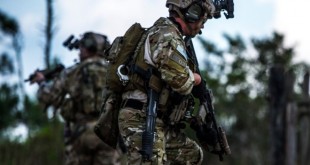 Special operations (S.O.) are military, law enforcement or intelligence operations that are “special” or unconventional …