Researchers are developing the Internet of Underwater Things (IoUT), a worldwide network of smart interconnected underwater objects that would transmit data from existing and planned roaming, autonomous vehicles, and underwater sensor networks to networks above the surface in real-time.

DARPA launched the “Ocean of Things” program in 2017 to propel the development of low-cost, low-power distributed sensor networks that can enhance maritime situational awareness. The Ocean of Things program will provide persistent, wide-area sensor coverage across the maritime environment through the employment of thousands of intelligent floating platforms, the agency said. Major industry players – including Google, Microsoft, and Honeywell – have also become increasingly interested in deploying such networks to monitor underwater infrastructures ranging from oil and gas pipelines to submerged datacenters.

There are many challenges in developing the low-cost, low-power distributed architecture for a subsea IoT. Radio waves do not propagate well underwater due to high attenuation. In fact, radio waves propagate at long distances through conductive salty water only at extra low frequencies (30− 300Hz), which require large antennae and high transmission power.

The acoustic waves are low-frequency waves that offer small bandwidth but have long wavelengths. Thus, acoustic waves can travel long distances and are used for relaying information over kilometers. The majority of today’s systems rely on point-to-point communication between modems that require at least 50-100 Watts for data transmission, a power level that quickly drains the batteries of underwater sensors and limits their lifetime.

Optical communication between devices, at a very short range, could be possible by use of highly efficient LED pulses or even lasers, but ocean water has widely varying optical properties depending on location, time of day, organic and inorganic content, or temporal variations such as turbulence.  Optical waves do not suffer from such high attenuation but are affected by scattering. Furthermore, transmitting optical signals requires high precision in pointing the narrow laser beams.

Recent work on underwater wireless charging and backscatter promises to extend battery life and to reduce the power consumption of underwater communication to sub-milliWatt levels. Underwater battery-free sensors can be leveraged in many long-term ocean applications such as naval deployments, oil spill monitoring, and scientific exploration. Such sensors may even be used in space missions to search for life in the recently discovered subsurface oceans of Saturn’s moon, Titan.

Backscatter is the lowest power wireless communication technology, which has led to its widespread adoption for ultra-low power networking. Backscatter sensors can wirelessly
communicate at near-zero power by simply reflecting radio signals in the environment. In particular, since wireless communication is the largest source of energy consumption for many underwater sensors, transitioning to backscatter technology would eliminate the need for batteries which increase size and cost and require frequent replacement.

To enable underwater backscatter networking, Researchers are exploiting the piezoelectric effect. This effect refers to the ability of certain materials to generate electrical energy in response to applied mechanical stress Since acoustic signals travel as pressure waves, they would induce a strain (deformation) on a piezoelectric material, causing it to transform the pressure wave into a voltage; hence, this effect has been used in designing certain kinds of microphones. More importantly, the piezoelectric effect is reversible, meaning that electrical signals applied on the electrodes of a piezoelectric device can be used to generate acoustic signals. It is this reversibility
that makes piezoelectricity an enabler for underwater backscatter communication.

In radiofrequency (RF) backscatter, a transmitting antenna sends a signal on the downlink, and an RF backscatter node harvests energy from this signal and communicates by modulating its reflection. Analogously Piezo-Acoustic Backscatter (PAB), the system that enables underwater networking at near-zero power consists of an acoustic projector (transmitter), a hydrophone (receiver), and a battery-free sensor. When the projector transmits acoustic signals underwater, a PAB sensor harvests energy from these signals and communicates by modulating their reflections. 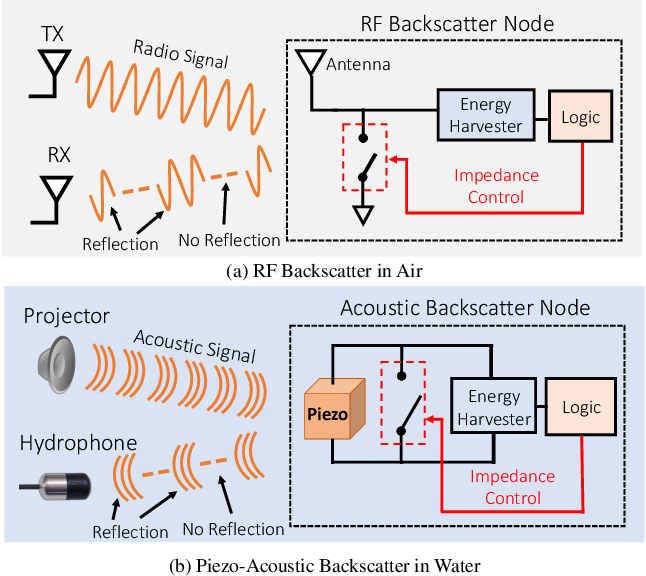 In particular, it can transmit a ‘0’ bit by absorbing the incoming energy, and a ‘1’ bit by reflecting the impinging acoustic signal. It can switch between the reflective and absorptive states by modulating the voltage across the piezoelectric interface, which in turn determines its vibration amplitude (i.e., reflection). The hydrophone receives the acoustic signals, senses changes in the
amplitude due to reflection, and decodes these changes to recover the transmitted messages. Such switching requires near-zero power and can be done entirely using the harvested energy, enabling PAB sensors to be battery-free.

A fundamental challenge facing PAB networks, however, is that piezoelectric materials are typically designed to operate at a specific resonant frequency. While operating at resonance improves their sensitivity and range of operation, it also limits their bandwidth. This prevents different links from concurrently communicating over multiple channels as in standard WiFi or cellular networks.

To realize this idea, they introduce the concept of recto-piezos. Recto-piezos are acoustic backscatter nodes whose resonance frequency can be tuned through programmable circuit matching. The design of recto-piezos is inspired by a concept from RF-based energy harvesting called rectennas. Rectennas can optimize their energy harvesting efficiency by matching the impedance of the rectifier (energy harvester) to the antenna. This impedance matching
results in a resonance mode, at which rectennas are known to optimally harvest energy. While recto-piezos are inspired by this idea, they instead employ it for tuning their resonance frequency. This matching-based frequency tuning allows us to ensure that different sensors have different resonance frequencies, and enable multiple concurrent backscatter transmissions, thus improving the network throughput.

Their results demonstrate that PAB sensors achieve communication throughputs up to 3 kbps and power-up ranges up to 10 m. We also demonstrate how our recto-piezo design enables tuning the resonance frequency and shifting it to an adjacent channel. This enables doubling the network throughput through concurrent transmissions and collision decoding.

However, these systems are still limited in their throughput, operational range, and scale. For example, the state-of-the-art system for underwater backscatter is limited to 3 kbps and a maximum distance of 10 m.

Bringing UWB to underwater backscatter faces multiple challenges. First, underwater communication nodes, including backscatter nodes, rely on resonant piezoelectric transducers. These transducers have high efficiency when transmitting and receiving sound at their resonance frequency, but their performance quickly degrades as the frequency moves away from resonance. Hence, they are limited to narrow bandwidths. Second, backscatter communication is inherently full-duplex and suffers from self-interference between the transmitted signal and the backscatter response. This problem is exacerbated for UWB backscatter since UWB signals are typically below the noise floor making it more difficult to detect and decode them in the presence of strong self-interference. Finally, scaling underwater UWB backscatter to multiple nodes will introduce
new forms of interference and require new mechanisms to disentangle interfering signals and decode them in frequency-selective and time-varying underwater environments.

At the heart of 𝑈2𝐵’s approach to overcoming these challenges is a metamaterial-inspired transducer design for underwater backscatter. Metamaterials are artificial materials (or material composites) that exhibit properties that would otherwise not occur in nature. In the context of 𝑈
2𝐵, we needed to develop a backscatter transducer that exhibits wideband properties.

Piezoceramic cylinders are used for transmitting and receiving sound underwater because they can transform sound to electric signals, and vice versa. The geometry of these transducers determines their resonance frequency. In the above figure, the resonance frequency is determined by the thickness, radius, and material composition of the piezoceramic cylinder. (By analogy, guitar strings have a resonance frequency that is determined by their thickness, length, and material). Existing underwater communication systems leverage this property to maximize the efficiency of backscatter and energy harvesting by transmitting sound at the resonance frequency
of the transducer.  However, the signal-to-noise ratio (SNR) and energy harvesting efficiency significantly degrade outside this frequency . In principle, it is possible to use a non-resonant transducer; however, such a design is undesirable as it would be inefficient and would further limit the range and SNR of underwater communication.

To overcome the bandwidth limitation while maintaining high efficiency, 𝑈2𝐵 synthesizes different forms of resonance through the multi-layer (metamaterial) design. The design alternates between active (piezoelectric) layers and passive (polymer) layers. It makes use of two kinds of resonance: the first (shown in blue and yellow) is similar to that of standard transducers and arises from the primary resonance of each individual piezoceramic layer.

The second and more interesting, kind of resonance arises from the passive coupling between the different active layers. Even though the polymer layers are themselves passive, by sandwiching them between two piezoceramic layers, we impose new constraints on how the active layers may stretch and squeeze concurrently. This coupled interaction yields additional resonances that fill in the gaps between the first two types of resonances, thus resulting in wideband operation.

A major benefit of UWB RF technologies is that they can extend the communication range between two nodes by allowing them to decode packets that are received below the noise floor. Specifically, a UWB transmitter can apply a spread-spectrum code (e.g.,CDMA) before transmitting its packet, and a UWB receiver can correlate with the same code to boost the received signal and decode packets that are orders of magnitude below the noise floor.

In the context of underwater backscatter, however, the communication range is not only limited by the noise floor, but also by the strong self-interference between the transmitted and received signals (since the nodes communicate by modulating the reflection of a continuous downlink signal sent from a remote transmitter). This self-interference limited past systems’ operational range to within a few meters.

To overcome this challenge,𝑈2𝐵 exploits the multi-resonant wideband transducer and shifts the backscatter response to an out-of-band channel. Specifically, 𝑈 2𝐵’s ultra-wide bandwidth allows it to divide its available spectrum to multiple orthogonal frequency channels and to use separate channels for downlink and uplink communication.

Let us assume the downlink packet is transmitted at 40 kHz. The backscatter node can leverage the non-linear nature of backscatter to shift the uplink response to a different center frequency, e.g.,20 kHz. A remote receiver that obtains both the strong downlink (at 40 kHz) and weak backscatter uplink (at 20 kHz) can simply filter out the downlink signal in hardware. This approach allows it to cancel self-interference and decode the weak backscatter packet even if it is orders of magnitude weaker than the transmitted signal or the noise floor.

• In comparison to single-layer backscatter nodes,𝑈2𝐵’s design boosts the throughput from 3kbps (of the state-of-the-art system) to more than 20 kbps. Such throughput is considered on the high
end of underwater communication systems, and can enable new applications such as streaming low-resolution images (e.g., forcoral reefs or aquafarms).
• 𝑈2𝐵’s self-interference cancellation approach allows it to mitigate the direct signal from the projector. Practically, we show that it enables us to communicate at up to 60 m.
• Our evaluation also demonstrates how 𝑈2𝐵 can support up to 10 concurrent transmissions (before spatial reuse), and that it can adapt its throughput based on the distance and size of the network. 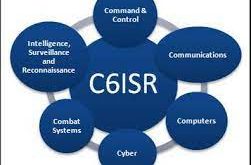