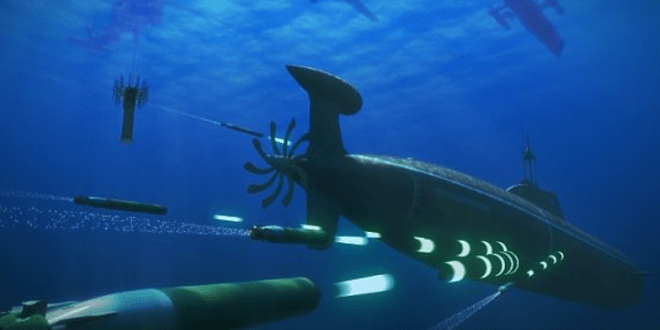 Unmanned underwater vehicles (UUVs) have inherent operational and tactical advantages such as stealth and surprise. UUV size, weight and volume are constrained by the handling, launch and recovery systems on their host platforms. Mission performance typically sets the range, endurance, speed, and depth requirements, however the UUV range is limited by the amount of energy available for propulsion and the power required for a given underwater speed. Current state-of-the-art energy sources are limited by safety and certification requirements for host platforms.

This means that for a given speed, range, and volume necessary for payloads and electronics, vehicle size is proportional to energy needed for the mission envelope. While designers can modify this envelope by reducing hydrodynamic drag, improving lift-to-drag performance, or by improving the volumetric energy density of energy sources, the volume and weight needed for systems to reduce drag or improve lift-to-drag in a fixed-size vehicle also reduces the volume and weight available for energy.

In 2015, DARPA launched the Blue Wolf program that seeks to break free of these limitations by focusing on energy, hydrodynamic lift, and drag-reduction technologies.  Boeing Co. and Lockheed Martin Corp. were involved to develop revolutionary underwater propulsion and drag-reduction technologies to enable manned and unmanned military undersea vehicles to move through the water faster and more energy-efficiently than ever before.

The initial reference architecture consists of a 21-inch-diameter vehicle with volume and weight reserved for baseline guidance, control, electronic systems, and payload section. The vehicle will use a baseline electric drive and conventional fin control.

The Blue Wolf program seeks to develop and demonstrate an integrated UUV capable of operating at speed-range combinations previously unachievable on current representative platforms, while retaining traditional volume and weight fractions for payloads and electronics.

Blue Wolf intends to focus on rapid development and maturation of novel energy, lift and drag-reduction technologies within an existing vehicle.

Hybrid energy systems refers to approaches such as thermal, electrochemical, or energy-harvesting with two or more energy sources to improve energy efficiency measured in Watt hours per mile. DARPA researchers say they plan to explore thermal and electric sources like fuel cells and batteries that can fit within an undersea vehicle system module.

In the first one-year phase of the program, the Blue Wolf contractors will design component and subsystem technologies for dynamic lift, drag reduction, and energy systems. An optional second phase will develop modules, and demonstrate safety, performance, and readiness for integration.

DARPA is collaborating with the Office of Naval Research and Naval Sea Systems Command to achieve program objectives and ensure compatibility with existing manned-platform safety requirements and future Navy technology developments. The program aims to culminate in a series of at-sea demonstrations and transition to the Navy.

Unmanned underwater vehicle (UUV) power experts at Applied Physical Sciences (APS) Corp. in Groton, Conn., are moving forward with a project to develop a highly customized high-performance battery system prototype to enable manned and unmanned undersea vehicles to move through the water faster and more energy-efficiently than ever before.

Officials of the Naval Undersea Warfare Center (NUWC) in Keyport, Wash., announced a $992,000 contract modification to Applied Physical Sciences  in  Sep 2018 to continue the company’s effort to develop a UUV batter prototype as part of the Blue Wolf program of the U.S. Defense Advanced Research Projects Agency (DARPA) in Arlington, Va.

The NUWC Keyport Division is administering contracting for the DARPA Blue Wolf program, which aims toward at-sea testing of undersea energy, hydrodynamic lift, and drag-reduction technologies.

Applied Physical Sciences has been involved since 2015 in a part of the Blue Wolf program that seeks to develop approaches to hybrid energy systems development such as thermal, electrochemical, or energy-harvesting with two or more energy sources to improve energy efficiency measured in Watt hours per mile.

Applied Physical Sciences experts have been exploring thermal and electric sources like fuel cells and batteries that can fit within an undersea vehicle system module.

In addition to hybrid energy systems, the DARPA Blue Wolf project focuses on new enabling technologies for dynamic lift and drag reduction systems leading to a fast, low-drag, and energy-efficient undersea vehicle that will provide not only insights into the strengths, weaknesses, and risks in the prototype vehicle, but also provide alternative design strategies and concepts of operations.

The Blue Wolf program envisions a 21-inch-diameter vehicle with volume and weight reserved for baseline guidance, control, electronic systems, and payload section. The vehicle will use a baseline electric drive and conventional fin control.

Modelling is the process of representing a model (e.g., physical, mathematical, or logical representation of …