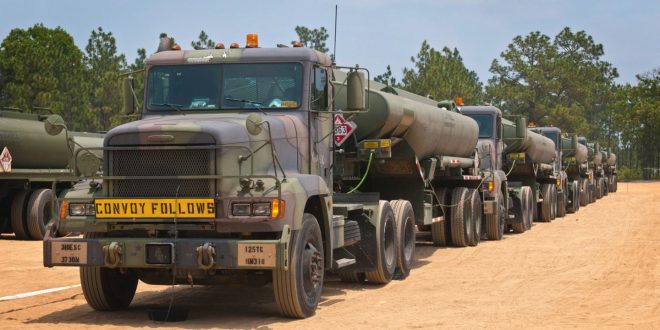 Rajesh Uppal November 15, 2019 Army Comments Off on US Army planning Future Brigades able to Fight for a Week Without Resupply 142 Views

Just as the Army shifts its priorities to fighting in more domains than ever before and training for major combat operations against capable rivals, so too must its logistics harden, speed up and adapt to a challenging warfighting landscape.

Lt. Gen. Aundre Piggee, the Army G-4, told an audience at the Association of the U.S. Army that the logistics side of the Army must take advantage of current and emerging technologies to deliver the right supplies to the soldier at the right time so they can be combat effective.

The head of Army logistics said he wants to make sure combat brigades of the future can operate on their own in combat for an entire week without resupply. “Our goal [is] to have brigade combat teams sustain themselves for seven days without resupply,” Lt. Gen. Aundre Piggee, who is responsible for Army logistical operations as deputy chief of staff for Army G4, told an audience at an Institute of Land Warfare breakfast sponsored by the Association of the United States Army. “That is significant. Seven days, that is a challenge.”

Currently, brigade combat teams can go about three days without needing to be resupplied with necessities such as fuel, water, food and ammunition, depending on battlefield conditions. Typically combat Brigades have between 3,000 and 5,000 individuals and hundreds of vehicles and other pieces of major equipment, are able to sustain independent operations for a maximum of three days

But it’s a challenge the officer explained as being vital to overcome if the Army expects to conduct potential high-end conflicts against “great power competitors,” such as Russia and China, in the future. There’s a lot out there to help meet that need,

Piggee said, from better supply systems and processes to utilizing artificial intelligence for coordinated efforts, additive manufacturing to build parts in the field, and drone or autonomous resupply to get items to soldiers faster and safer.

For too long, Army sustainers got comfortable with well-established logistical networks and forward operating base-type deployments after nearly two decades of low-intensity conflicts in countries such as Iraq and Afghanistan. Soldiers arrive and the equipment was already there. Or it was flowing as needed. Yes, sometimes they were under attack via convoy bombings and other methods used by insurgents in Iraq and Afghanistan, but it was sustainable.

“We were not used to moving and maintaining equipment because equipment was waiting for us at forward operating bases and contractors did most of our maintenance,” Piggee explained. “We are now training this capability every day.”

The Army has already been exploring a host of novel logistical capabilities that could improve the situation in high-risk environments. This includes major investments in unmanned, autonomous ground and air logistical platforms that will help ensure a flow of supplies in high-end conflicts without the same risks to Army truck drivers and aviators.

Modern militaries are notoriously fuel-hungry and this goes well beyond the immediate need to have sufficient stocks to make sure a unit’s armored and unarmored vehicles are gassed up and ready to go. Emplaced artillery and air defense systems, electronic warfare equipment, communications networks, ground-based sensor nodes, life support facilities – including temporary living spaces and mess halls – all require electrical power and therefore generators. Depending on the environment, vehicles may find themselves idling or running auxiliary power units at all times to either generate heat or power air conditioning units, too.

Piggee says Army combat brigades will need to find ways to trim their fuel consumption by at least 30 percent to have any hope of operating for a week without resupply. That’s a “demand reduction” issue that reaches beyond petroleum and also to battery life, power consumption on smart grids and anywhere else that technology procedures and advancements can make the formation as lethal as long with less fuel or power consumption.

The Army’s is already looking at increasing the use of electric or hybrid-electric propulsion and auxiliary power-generation systems on various vehicles, including the use of hydrogen fuel cell technology, to quickly reduce the need for fuel by between 10 and 20 percent.

The Army has taken steps to meet this goal by ensuring that BCTs have “a mobile supply of parts we forecast will be the most needed in austere environments fighting a decisive action operation,” he said. “We have greatly improved our supply of spare parts across the Army.”

Scientific studies suggest that an average person can survive up to a week without water, but many experts say that this likely assumes optimal physical and environmental conditions.  In its guidelines for preparing for and living in the immediate aftermath of natural disasters, the Federal Emergency Management Agency recommends regular people drink at least a half gallon of water every day to ensure proper body function. Following that requirement, a typical Army brigade combat team with between 3,000 and 5,000 individuals needs at least a total of a 1,500 and 2,500 gallons of drinking water alone, if not more, every day. This amount of water, which also weighs between 12,500 and 20,800 pounds, doesn’t take into account any additional potable water necessary for food preparation or localized medical facilities.

The Army has its own deployable water purification capabilities and various private companies are developing improved, mobile systems, but these would still require a ready source of water to begin with. Emergency resupply, including via unmanned air or ground vehicles, would be another option, but the entire point of the service’s new logistical plan is to make sure brigades can continue to fight even when their supply lines get disrupted.

Interestingly, hydrogen fuel cell technology may hold a dual-purpose solution to both fuel and water problems. The way in which these systems produce energy involves hydrogen bonding with oxygen, with water being a byproduct that a complete system can collect for reuse. General Motors’ experimental Chevy ZH2 hydrogen fuel cell pickup truck, which the Army has tested, was able to produce two gallons of potable water for every hour of operation. A larger, mobile fuel cell power generating plant might be able to produce both energy and water for a brigade combat team during operations.

The service also wants to standardize additive manufacturing by relying more on 3D printers so units can print spare parts in the field as needed, Piggee said. “We do not need to make repair parts 8,000 miles from soldiers if we can print them on the battlefield at their forward locations.”

To accomplish this, Army Materiel Command is establishing a center of excellence for advanced manufacturing at Rock Island Arsenal in Rock Island, Illinois.

“We are in the process of finalizing policy so we can train this capability,” Piggee said.

Vehicles with electric or hybrid-electric drives also have the benefit of being quieter and having reduced infrared signatures compared to those with traditional combustion engines, which has made them even more attractive to the Army. Unfortunately, these systems will still require charging stations, which typically involves a generator.

High-capacity batteries and fuel cells offer one way to ensure sustained operations over extended periods of time. Another option might be to have mobile solar-powered generators to provide an additional source of power if necessary. The Army is also exploring the potential of wireless, microwave or laser power distribution. This could, in principle, allow the service to “beam in” power to remote locations, but that technology is not yet robust for powering military operations at extended ranges.

In 2016, the Army began improving its capability to “set a theater in a large operational deployment against a capable adversary,” a skill the service had not had to use in more than a decade since combat forces operated out of well-supplied forward operating bases in Iraq and Afghanistan, he said.

“I believe we are much better shape than we were just two years ago,” Piggee said. “We have gone back to the basics. We were not used to moving and maintaining equipment because equipment was waiting for us at forward operating bases and contractors did most of our maintenance. We are now training this capability every day.”

Car technology is rapidly increasing. What was once science fiction, is quickly becoming science fact. …