Weapon Locating Radars (WLR) that can track artillery rounds, rockets, mortar shells and unguided rockets, have been developed by NATO, China and India

WLR is employed to locate the hostile artillery guns, mortars and rockets so that rapid counter bombardment can be resorted to in order to neutralise them. Time is of essence as hostile artillery can resort to shoot and scoot tactics. During an insurgency scenario it greatly helps in locating them if the insurgents are resorting to artillery fire. The technology employed for WLR is radar based arrays which detects and tracks the trajectory of round/mortar/rocket in various stages of the flight and then extrapolates the origin of the fire with the help of a computer.

State-owned electronics and radar systems developer China Electronics Technology Group Corporation (CETC) has completed development of an updated variant of its S-band phased array SLC-2 weapon locating radar (WLR) system and is in advanced discussions with a number of potential export customers in the Asia Pacific, Central Asia, and the Middle East, Jane’s sources have revealed.

COBRA is a high mobility weapon location radar which meets all NATO requirements. The Euro-Art Consortium has been the first company worldwide to develop and manufacture this multifunctional counter battery radar with a fully active phased array antenna. 12 COBRA systems have been delivered to Germany, 10 to France and 7 to the UK.The € 500 million contract includes logistics and services.

Efforts to acquire such a system intensified after the Kargil War, where the Indian Army was severely disadvantaged by its lack of firefinding radars. While the Pakistani forces were equipped with American AN/TPQ-36 Firefinder radars, India only had British Cymbeline mortar detecting radars, which were not suitable. Almost 80% of Indian casualties during the war resulted from enemy artillery fire, making such a radar critical. The active radars can be countered by using Jamming of radars (overpowering the desired signals by noise) , deception by generating false artillery firing signals. However passive radars like Swathi are difficult to couter.

In recent war  Armenia suffer vast damages, losing millions of dollars’ worth of military assets in the war, Swathi radars did not find a mention in the war damage assessment reports. The country lost about 185 T-72 tanks, 90 armored fighting vehicles, 182 artillery pieces, 73 multiple rocket launchers, 26 surface-to-air missile systems, which include a Tor system and five S-300s, 14 radars or jammers, one SU-25 warplane, four drones and 451 military vehicles, as documented by analyst Stijn Mitzer in the military affairs blog Oryx.

India had in March 2020  won a $ 40 million defense deal to supply four indigenously built military radars to Armenia. Developed by India’s Defense Research and Development Organization (DRDO) and manufactured by Bharat Electronics Limited (BEL), Swathi Weapon Locating Radars (WLR) can track multiple targets simultaneously feeding the data to the artillery operator. It is noteworthy to mention that it had only been five months since the radar deal with India was signed by Armenia, and according to sources, only one unit had been supplied to the country by the Indian defense company, the rest are yet to be shipped.

The Azerbaijani drones had wreaked destruction of the Armenian frontlines with advanced drone attacks, destroying all the air defense systems. In such an environment, it was difficult for a radar-like Swathi to survive, since the attacks were aerial and not ground-based, which it is not designed to counter. Moreover, the Weapon Locating Radars playing limited roles in modern wars, and their capabilities are limited in a battlefield is network-centric, and air power dominated. Swathi has been useful for India on the Line of Control (Loc) while battling Pakistan, and it said the Indian army has deployed the radar in the Ladakh region too, where the country is locked in another conflict with China.

The latest trend is to combine air defence and WLR function in a single radar platform with 3D AESA technology which can detect long range missiles as well UAVs. Lockheed Martin’s Q-53 has the capability to identify and track UAVs thus combining air surveillance simultaneously with counter target acquisition in a single sensor.

The latest SLC-2E system, developed by CETC’s Nanjing Research Institute of Electronics Technology (NRIET) business unit, is described by the company as a long-range multifunction WLR system. In contrast to the original model, the 2E variant is not only designed to support counter-battery missions against hostile artillery, rockets, and surface-to-surface missile systems, but also detect airborne threats with a dedicated air defence mode. A complete SLC-2E system comprises a control cabin with associated processing equipment, on-board power supply, and the radar transmitter. A prototype based on a 6×6 Beiben truck chassis was earlier unveiled at the Airshow China 2016 exhibition.

This represents a performance increase in terms of stated detection range of 42% for artillery rounds and 80% for rockets over the earlier model.

In counter-battery mode, the SLC-2E system adopts a fixed position facing the direction of the threat with the antenna mechanically elevated from 0° to 90°. The radar is capable of electronically scanning a space that is +/- 45° in azimuth and 35° in elevation. The company claims that up to 10 targets can be located and tracked simultaneously.

COBRA was developed for France, Germany and UK as the first multifunctional counter battery radar in the world with a fully active phased array antenna, enabling accurate multiple targets detection within a short reaction time. During all live fire trials to which COBRA participated, including desert trials in UAE during summer 2005, in competition with other weapon locating radars, COBRA achieved performance (location range as well as detection and location accuracy) were far better than the COBRA Specifications. 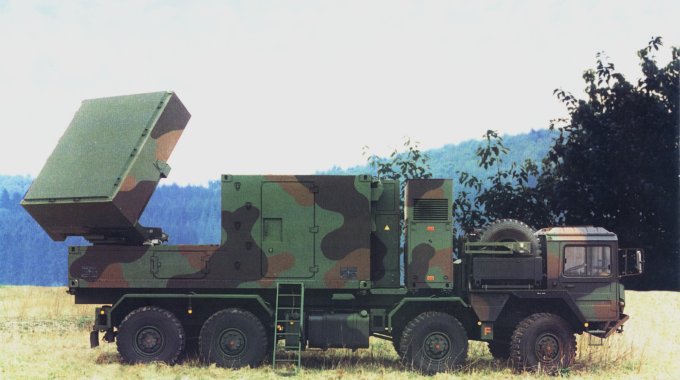 Three COBRA systems have been subjected to intensive live-fire testing at Meppen in Germany and at Canjuers in France. The Euro-Art consortium has successfully completed a round of qualifications tests for COBRA in the deserts of UAE under harsh environmental conditions to the satisfaction of its customers. Furthermore, COBRA has been deployed in several out-of-area operations including UN missions: German systems are involved in the Defence Against Mortar Attacks (DAMA) initiative that is part of the NATO Conference of National Armament Directors’ Programme of Work for the Defence against Terrorism. French systems are in operation in Lebanon, UK’s systems have been deployed in Iraq and are actually going to be prepared for Afghanistan.

COBRA is designed to detect small cross-section targets across the entire battlefield and can also classify ammunition types and firing modes, like rockets, swarms and salvos. In less than two minutes, more than 40 six-gun batteries can be located and reported to a higher command. Parallel to the battery location function, COBRA can be tasked to perform friendly fire registration by tracking the counter-fire projectiles and providing correction parameters.

The COBRA radar is contained in a single cross-country wheeled vehicle, with an operations cabin and the radar antenna mounted on top. This self-contained, stand-alone configuration assures high mobility by enabling extremely rapid deployment and decamp times.

The operations cabin houses the system’s receiver, signal processor, data processing subsystem, radar operator’s console, command, control and communications console and vehicle intercom. The operations cabin also has resistance to small arms fire and shell fragments and is provided with nuclear/biological/chemical and electromagnetic pulse protection. Depending on the customers request, COBRA has been configured for one as well as for two operators, enabling the radar to also act as a command post.

The COBRA system is now being promoted worldwide for export sales by Euro-Art International. Germany has already sold 2 of its systems in an adapted version to Turkey. Euro-Art International has awarded as well a contract from the United Arab Emirates Armed Forces for the supply and commissioning of 3 COBRA Radars – whereof 2 systems have been delivered to the UAE customer already. Perfectly adapted to battlefields, COBRA high mobility weapon location radar will protect UAE Armed Forces on the move.

Swathi is an electronically scanned phased array radar, designed to detect projectiles with a small cross-section across the battle space horizon, and has the capability to handle simultaneous fire from weapons deployed at multiple locations. The WLR is designed to detect and track incoming artillery rounds, mortar and rockets and locate their launchers. In its secondary role, it can also track and observe the fall of shot from friendly guns and provide fire corrections to counter-battery fire. On detecting an incoming hostile round, the radar automatically acquires and classifies the threat and initiates a track sequence while it continues to search for new targets. Algorithms for trajectory computations use environmental factors, along with trajectory and track data, for estimating both launch and impact points to the desired accuracy. 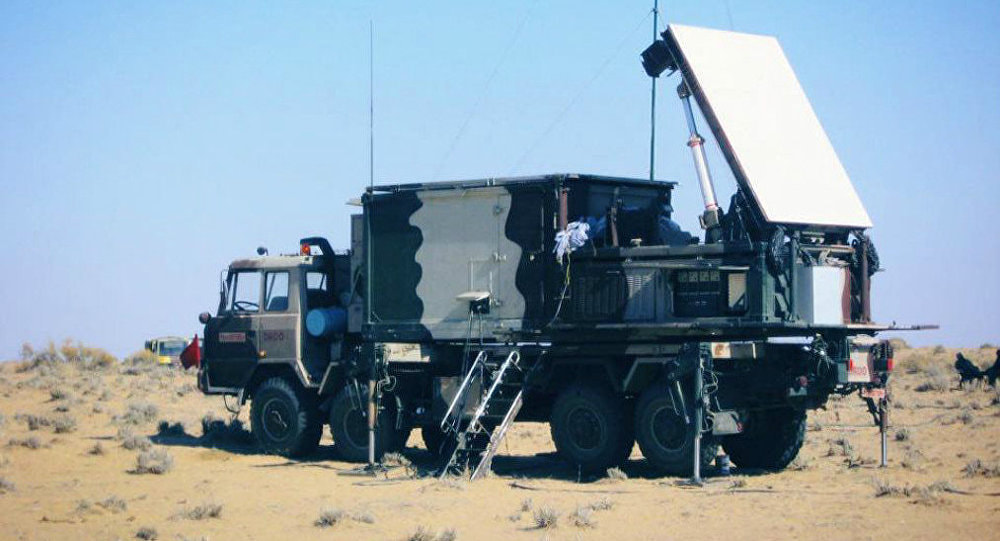 The WLR is configured on a wheeled Tatra 8×8 truck platform. The trucks are manufactured by Bharat Earth Movers Limited in India under license. The WLRS is designed to operate in a high-density fire environment and has an all-weather capability, high mobility and quick reaction time. The system is a two-vehicle configuration, with the primary sensor, processors, displays and control unit on a single vehicle, and a separate power vehicle to power the radar. The radar data can also be displayed remotely.

According to DRDO, the radar uses advanced signal processing techniques for detection and tracking projectiles in the presence of ground, weather clutter and other forms of interference in the EW scenario. The detection range for large caliber artillery rounds is up to 30 km, and increases to 40 km for unguided rockets. The robust design of the radar array and algorithms allows the WLR to effectively operate even in a high density fire environment, in severe clutter and interference (jamming) conditions. Up to 7 targets can be tracked simultaneously. The radar can track rounds fired at both low and high angles, and at all aspect angles – from behind or towards the radar, or at an oblique angle to the array. The WLR features adaptive radar resource scheduling to increase efficiency and reliability.

The WLR Array is an electronically steered radar, meaning the radar antenna does not move while in operation. The radar can electronically scan a +/-45° range of azimuths for incoming rocket, artillery and mortar fire. The radar antenna is slewable up to +/-135° within 30 seconds, which gives the WLR the ability to quickly change its scanning sector, and provides it 360° scan capability.