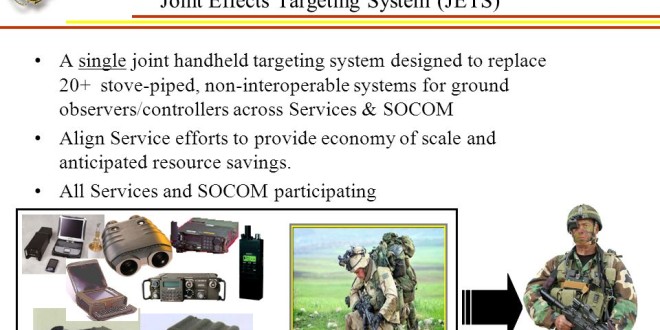 The Joint Effects Targeting System (JETS) Target Location Designation System (TLDS) is an Army-led, Joint-interest program with the Air Force and Marine Corps to develop and field a one-man-portable, hand-held capability to rapidly acquire, precisely locate, and engage targets with precision-guided munitions, and improves the effectiveness of engagement with unguided munitions.

The roughly 5.5-pound JETS system would replace the Lightweight Laser Designator Rangefinder (LLDR) which weighs approximately 35 pounds and is technically a crew-served weapon geared towards static positions. It’s portability allows a forward observer to walk around far and wide with JETS, while LLDR is a two- or three-person system that needs to be set up at a fixed observation point.

The hand-held system includes a GPS; celestial compass; precision azimuth vertical angle module, or PAVAM; and a laser designator to enable forward observers to accurately identify a target and drop precision-guided munitions such as a Hellfire missile or Excalibur 155mm artillery round to within 10 meters of the target, Maj. Robert J. Heatherly, assistant product manager for JETS, told a groups of reporters.

It now takes up to half an hour to approve the coordinates and get a bomb dropped once a forward observer has called in a target. But time is precious in a firefight, so the Joint Effects Targeting System cuts that lag time way down.

“Out there on the battlefield, when you need timely effects on target with precision, the process of mensuration can really take a lot of time as far as impacting the maneuver commander’s decision to either deploy those effects or to go ahead and take the objective through force,” Maj. Rob Heatherly told reporters. The key advantage JETS will give forward observers in infantry units is the time it will cut from the current “mensuration” procedure of identifying a target and dropping precision munitions, Heatherly said.

With the Army’s current laser-targeting system, coordinates and images have to be checked and rechecked by multiple targeting warrant officers and a fire support element, which sends the target up to their headquarters. “You’ll still have to get the maneuver commander to release weapons, but as far as the process of having to go all the way through the different levels, refine with imagery, it will cut that step out,” Heatherly said.

JETS trades weight for a more limited range, the new system can only spot up to 2,500 meters, versus LLDR’s 3,700. “The way the system will be utilized out there, the forward observers … will be closer to the fight, so they don’t need that greater range; they need something that can give them that precision targeting capability and quick response.

Lt. Col. Michael Frank, the product manager of soldier precision targeting devices, said bluntly of JETS ability in the field: “I turn a howitzer or a Paladin into a giant sniper rifle.”

The system underwent testing during 2017, including airdrop testing at Fort Bragg in North Carolina in August, when soldiers put the system through several combat-equipment jumps and door-bundle jumps, evaluating its ability to function after hitting the ground.

The Army expects its new Joint Effects Targeting System – a handheld, portable device for target observation, location, and designation – to start arriving with forward-observation teams by mid-2018, according to Army Times.

The JETS will answer the need for a lightweight, highly accurate targeting system that allows target engagements with precision munitions (e.g., Joint Direct Attack Munition, Excalibur and laser-guided weapons) and provide the warfighter with crucial digital connectivity to request and control indirect fires and close air support from all Joint assets.

The JETS allows small units supported by Army forward observers or Joint Tactical Area Communications Systems to have access to precision targeting in all operational environments. The Army noted that the JETS-TLDS platform will also offer 24/7 all-weather precision targeting and target-acquisition services in support of the service branch’s dismounted operations.

The TECS will interface with TDLS and will provide a networked, automated communications capability to plan, coordinate, and deliver fire support, as well as provide terminal close air support guidance.

JETS is made up of a target location, azimuth and vertical angle, and laser marker modules. These modules allow the system to remain accurate in a variety of weather conditions and function with a speed necessary in forward operations.

The system will also speed the measurement process, Frank said. “We don’t have to take anywhere from 15 to 18 to 20 minutes. We can get that target data to the guns and rounds out of the tube faster with JETS than without.”

But JETS’ real edge is that it cuts out the mensuration step, that 20- to 30-minute process of refining coordinates through multiple people before getting approval to drop GPS-guided ordnance — addressing the Fires Center of Excellence’s top capability gap, according to the project’s assistant product manager. “With the JETS, you don’t need to utilize the process of mensuration,” he said. “It will give such an accurate, precise grid that it will cut that piece out of the loop. … Currently, it can take up to 20 or 30 minutes.”

Mensuration is a series of “latency target refinement verification checks and balances” that can in some cases involve several targeting warrant officers using satellite imagery to verify a target before the request goes to the maneuver commander for approval, Heatherly said.

The Army already has a high-precision targeting system, the Lightweight Laser Designated Rangefinder, but it has a major shortfall. “[It’s] great and all, unless you have significant cloud cover, if you’re under foliage, if you’re in a building, you can’t see the sky,” and if you’re in a place like Iraq where all the oil fires darken the sky, Heatherly said.

JETS comes with a suite of optional extras, including a gadget called Precision Azimuth Vertical Angle Model, a box with a gyroscope that calculates the Earth’s rotation for the most accurate location reading possible, no matter the weather or time of day. It is also referred to as north finder or gyrocompass, and provides all weather, 24 hour targeting capability, and is immune to ferromagnetic field distortions. Advanced Hemispheric Resonating Gyroscope and accelerometer technology can provide fast, high accuracy and vertical angle determination, as well as motion tracking without GPS. The system overcomes the primary weakness of the magnetic compass by measuring earths rotation rate to determine the true North.

JETS includes a precision azimuth vertical angle module, which has a Hemispheric Resonating Gyroscope that “can tell from the rotation of the Earth where North is, so … you have that ability to get that precision grid out,” Heatherly said. The current Lightweight Laser Designator Rangefinder can provide a precision grid, but doesn’t have a PAVAM, so it doesn’t work in cloudy weather or conditions where the sky is not visible, Heatherly said.

It’s also got GPS for self-location, a celestial compass for locating targets and a laser marking module for guiding aircraft to targets. “I can tailor my assault pack, if you will, depending on the mission at hand,” Heatherly said. Using JETS, a forward observer establishes his own location with the GPS. Then, he can use the celestial compass for target location, Heatherly said. “For day, it will take a shot of the sun, and at night it will take a shot of the star constellation,” Heatherly said. “It can tell from where the sun is in the sky and from where the constellations are where North is.

JETS also gives the forward observer the ability to verify the target he has marked with the laser designator. “When you lase a target … it will display like a picture in picture window … and it will show you what it was that you lased,” Heatherly said. “That is vitally important; it gives that FO that assurance that what he is actually shooting at is the actual target that he is trying to engage. “If you [are] shooting far away, there might be some brush or a tree in the way, so you have to take that shot a few times just so you are actually hitting that building or hitting that vehicle.”

According to contract requirements, accuracy of the system must be equal or less than 10 meters at 2.5 kilometers and 5 meters at 5 km (objective). DRS Technologies received a five-year, $339.3 million dollar contract to produce the system in December 2016. 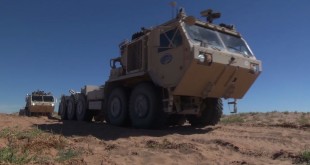