The Department of Defence has shown off a prototype of its ‘hoverbike,’ a rectangular shaped quadcopter that has been named the Joint Tactical Aerial Resupply Vehicle, or JTARV. ‘Anywhere on the battlefield, Soldiers can potentially get resupplied in less than 30 minutes,’ said Army researcher Tim Vong. SURVICE and Malloy are working on the Hoverbike as part of an ongoing research and development contract with the U.S. Army Research Laboratory.

The engineering company Aerofex plans to introduce Hover bike in 2017, which is expected to be able to fly up to 10 feet off the ground at 45 mph for duration of 75 minutes, while carrying a 120kg payload. Inventor Chris Malloy claims Aero-X is the world’s first flying motorcycle while actually it’s classified as a helicopter.

Aero-X is now being transformed into new class of ‘Tactical Reconnaissance Vehicle’. Army recently showed off a downscaled electric drone during a demonstration at CASCOM headquarters. The aircraft, called a hoverbike, is being developed by the Department of Defense under the Soldier Aerial Mobility Vehicle project. When fully developed, the hoverbike will be capable of piloted or remote operation, a 125-mile range and a 45-mph cruising speed, according to spokesmen. Furthermore, it will have an 800-pound payload (to include the ability to transport troops).

The two-passenger Aero-X will consist of light-weight carbon fiber frames and fan blades and powered by a three 240 horsepower three-rotor rotary engines. Its design is based on proven quadcopter, instead of old bicoptor configuration to keep the cost down.

The intuitive control system of Aero-X to gives similar experience as that of riding a motorcycle; rider uses a combination of the bike’s steering apparatus and the lean of his or her body to maintain control. The new prototype uses a patent-pending quad system of overlapping blades, which they say reduces weight and platform. Aerofex has been issued an international patent for its ducted-fan technology which enhances safety.

Aerofex intends for the Aero-X to be able to safely operate over flat land or terrain with undulating hills. However, the company does not recommend operation of the hover bike over mountainous terrain.

The US Department of Defense, Maryland-based Survice Engineering and British Malloy Aeronautics will be working together to make a new hoverbike class of “class of Tactical Reconnaissance Vehicle (TRV), according to Malloy. The makers say it takes off like a helicopter, will fly to an altitude of over 3000m and reach speeds of 100 knots (185km/h). The hoverbikes will be a new class of ‘Tactical Reconnaissance Vehicle’, the US Department of Defense says

Reconnaissance missions range from nearly static, periodic deployments from permanent bases to fast-moving pursuits to find and acquire highly mobile threat forces. Reconnaissance vehicles are usually designed with a low profile or small size and are lightly armoured, relying on speed and cover to escape detection.

This new kind of reconnaissance vehicle can rapidly fly forward detect targets and transmit video of the potential threat back to a command post or intelligence center. The video can be reviewed in real-time, and this information could be combined with other available intelligence to determine whether the target is indeed a threat. It can also provide all-terrain mobility to deployed Special Operations Forces in austere locations and across a myriad of special operations missions.

The new vehicles shall also be able to avoid improvised explosive devices ( IEDs), used by terrorists or unconventional warfare by guerrillas or commando forces, which were responsible for approximately 63% of coalition deaths in Iraq and have caused over 66% of coalition casualties in the 2001–present Afghanistan War.

To counter the proliferation of state, non-state, hybrid and proxy foes that use dispersion, concealment and deception tactics the future Army vision to develop a small more mobile units and future vehicles that would be lighter and faster. 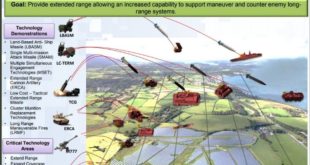