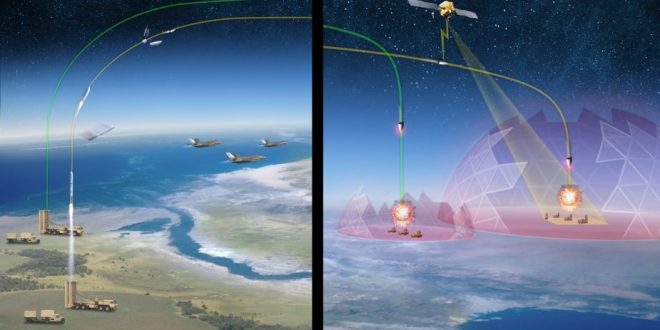 The 2018 National Defense Strategy requires that the DOD provide combat-credible military forces to deter war and protect the security of the nation. Specifically, the Joint Force must be able to strike diverse targets inside adversary air and missile defense networks to destroy mobile power-projection platforms and time-sensitive high-value targets.

As the focus of the US Army shifts from low-intensity conflicts against guerrillas, non-state actors, and terrorists to near peers like Russia, China, and North Korea which have mechanized ground forces, the Army is trying to boost its conventional firepower, both in lethality and range. United States ground-based forces “are currently limited in effective range of surface-to-surface precision fires.

OpFires is exploring the use of hypersonic payloads and innovative propulsion solutions to maximize the operational range envelope of the system while providing persistent standoff. Hypersonic vehicles — which can fly at speeds in excess of Mach 5 — have become increasingly important technology areas to the Defense Department. The advantage of hypersonic vehicles is not just time of flight, but also the range that would be achieved by the high-speed vehicle just because of physics, said Steven Walker. “You also get a lot of potential maneuverability that we don’t have today,” he said. It’s “a combination of all those factors [that] make it an attractive technology, which is why our adversaries are working on them.”

According to DARPA, “the overarching goal of the OpFires programme is to develop and demonstrate a novel ground-launched system enabling hypersonic boost-glide weapons to penetrate modern enemy air defenses and rapidly and precisely engage critical time-sensitive targets”.

In 2023, the Army plans to deploy both its first hypersonic missile, the Long-Range Hypersonic Weapon (LRHW), and its first intermediate-range missile since the Cold War Pershing III, the Mid-Range Capability (MRC). But it won’t have a weapon that’s both intermediate-range and hypersonic. LRHW will be bigger, faster, and longer-ranged than MRC, flying “thousands of kilometers” as opposed to 1,800 km (1,118 miles). LRHW will also be much more expensive and relatively rare, reserved for the most important, distant, and difficult targets.

OpFires began 2017 as a joint Army-DARPA effort to develop a hypersonic weapon with a range between 500 and 5,500 kilometers (310 to 3,418 miles). That’s because the INF Treaty banned cruise and ballistic missiles in that range band but not hypersonics, which are neither. The Army provided $19 million for OpFires in 2020 and requested another $28 million for 2021.

OpFires is a joint DARPA/US Army three-phase development initiative for a mobile, ground-launched tactical weapon delivery system capable of carrying a variety of payloads to a variety of ranges, underpinning which is a current imperative to develop and exploit hypersonic weapons technologies.

The OpFires programme comprises three main elements: the Propulsion System – referred to as Phase 1-2; the Integrated Weapon System – Phase 3; and a completed study to inform system and launcher characteristics.

OpFires program will conduct a series of subsystem tests designed to evaluate component design and system compatibility for future tactical operating environments. Phase 2 will mature designs and demonstrate performance with hot/static fire tests targeted for late 2020. Phase 3, which will focus on weapon system integration, will culminate in integrated end-to-end flight tests in 2022.

Phase 2 will be a 12-month effort, with six-month milestones, executed by approximately two selected performer teams. Government-furnished information (GFI) resulting from this effort may be provided to OpFires Integrated Weapon System task awardees.

DARPA issued a Broad Agency Announcement (BAA) in March 2018 seeking innovative solutions for the OpFires Propulsion System, with the provision that “the successful performers for the OpFire Propulsion System programme will have recent, relevant, and significant experience and expertise in propulsion system design and development to include booster performance analysis and missile integration.”

According to DARPA, “OpFires Propulsion System focuses on the early development and demonstration of innovative booster solutions, including, but not limited to, liquid and hybrid propellant mixtures, pintle motors, variable thrust nozzles, pulse motors, re-ignitable propellants, and other technologies that vary thrust and manage energy at scale for large tactical missiles. Innovations such as these will need to maximize the operational range envelope of an integrated missile system and adapt to a variety of potential payloads.”

The first two phases of the OpFires programme focused on the propulsion technologies required to deliver various payloads for different ranges. Under phase one effort, Aerojet Rocketdyne, Exquadrum, and Sierra Nevada Corporation (SNC) completed a total of over 30 motor trials.  The two-phased effort is focused on the design and development of advanced booster concepts and technologies.

You can make a long-range rocket hit a short-range target, but if you make it dive back towards the ground a lot earlier than it’s designed to do, that puts tremendous stress on the weapon, which could make it miss or even break apart in flight. That’s especially true for a rocket powerful enough to get the warhead moving at hypersonic speeds, said DARPA’s program manager, Army Lt. Col. Amber Walker.

So instead of having a rocket motor you have to fight to rein in, you want a rocket motor you can just turn off when you’ve reached your target – a throttleable rocket. But that’s not easy either. For reasons of safety and reliability, solid rocket fuel is carefully formulated so it doesn’t either start or stop burning by accident, and historically no one tried to make it stop burning in mid-flight on purpose. Further, Army missiles, in particular, have to endure all sorts of conditions, from Arctic cold to desert heat to swampy humidity, and still fire reliably on command – and only when commanded to.

The throttleable rocket motor will be the second stage of the OpFires rocket booster. The first stage launches the weapon and boosts it through the thickest part of the atmosphere, which requires different performance characteristics; it will be tested separately in November or December of next year.

In September/October 2018, DARPA awarded three separate Phase 1 contracts to Exquadium, Aerojet Rocketdyne, and the Sierra Nevada Corporation (SNC) for the OpFires Propulsion System segment.  All three successfully demonstrated miniature versions of the motor and got further awards to build and ground-test a full-scale version. Exquadrum has completed that ground test, while Aerojet and SNC hope to do theirs before the end of the year. It’ll be up to Lockheed Martin, the prime contractor, to pick which of the three designs to use for the actual missile to be flight-tested in 2023.

Phase two of the programme will conclude with multiple hot / static fires. A hypersonic weapon system is one of the key priorities of the US Department of Defense’s National Defense Strategy and Missile Defense Review. The affordable and survivable weapon systems offer advantages in terms of speed, altitude, manoeuvrability, range, flexibility and precision.

During the static test in May 2021 at Redstone Arsenal in Huntsville, the company demonstrated the variable-range technology that will enable OpFires to provide the military with intermediate-range missile capability. Aerojet Rocketdyne has successfully tested a full-scale advanced solid rocket motor as part of an ongoing test series in support of Phase 2 of the Operational Fires (OpFires) program, a U.S. Defense Advanced Research Projects Agency (DARPA) effort to develop a ground-launched tactical hypersonic weapon.

During the static test last month at Redstone Arsenal in Huntsville, the company demonstrated the variable-range technology that will enable OpFires to provide the military with intermediate-range missile capability. The solid rocket motor performed as expected through the duration of the static test, which was performed at sea level. The static test follows earlier tests of booster test articles and a series of subscale propulsion system tests to support the program.

“Lockheed Martin will deliver the prototype missiles utilising the experienced production teams that currently produce the ATACMS, GMLRS and PAC-3 missile systems in Camden, Arkansas.” In late 2021, the phase three effort of the OpFires programme contract will move the design to the critical design review (CDR). While the integrated flight testing will commence in 2022, the testing of components and subsystems will begin in 2021.

Lockheed Martin has already selected the hypersonic glide body that will carry the missile warhead, coasting to the target (hence “glide body”) at Mach 5-plus once the rocket motors cut off. That glide body is the one Lockheed is already developing for the Air Force’s ARRW program (Air-launched Rapid Response Weapon).

Exquadrum has concluded its final hot-fire test of the new rocket for the US DARPA Operational Fires (OpFires) system objectives. This is the second hot-fire test conducted to meet the objectives of DARPA OpFires advanced hypersonic weapon system mission. The event was conducted for full-duration at the company’s FORGE Rocket Test Facility at the Southern California Logistics Airport in Victorville, California, US.

This latest test is the culmination of Phase 2 of Exquadrum’s $15.1m prime contract secured in September 2018. Phase 2 of the OpFires weapon system was developed jointly by the team of Exquadrum and Dynetics, Alabama. Exquadrum CEO Kevin Mahaffy said: “Exquadrum and our partner, Dynetics, are grateful to DARPA for providing us the opportunity to take a highly innovative propulsion technology from idea to full-scale with many of the key components in their flight-like configuration. “This technology is now ready to transition to a host of advanced flight applications from hypersonics to traditional rocket booster systems.”

McShane said. “AEDC test facilities and personnel provide high-pedigree and large quantities of data on both tactical and strategic weapon systems performance early in the weapon’s development. This first look at ‘truth’ allows weapon system engineers to rapidly converge on a closed-solution design. AEDC has provided this knowledge to multiple hypersonic weapon system programs to enable their rapid development and fielding to meet the demands of the NDS.

The objective of the testing in VKF was to determine the stability and control characteristics for the OpFires weapon system across the hypersonic envelope. Aerodynamic data on multiple configurations of the test article were evaluated across a range of Mach and Reynolds Numbers at various incidence angles.

“The test team utilized an efficient and rigorous test methodology to collect the required data. All objectives were met,” said Lt. Col. John McShane, director of the AEDC Flight Systems Combined Test Force. “The data collected at AEDC is essential to the rapid development of hypersonic weapon systems and providing DOD leadership decision-quality information prior to flight test and fielding.”

The Pentagon’s premier research agency conducted the test at the White Sands Missile Range, New Mexico, in May 2022 as part of the Operational Fires (OpFires) program. The test achieved all its objectives, including “missile canister egress, stable flight capture, and use of US Army inventory artillery fire control systems to initiate the test mission.” The agency revealed that this was also the first time a US Marine Corps (USMC) logistics truck was used as a medium-range missile launcher.

Director of Tactical Missiles Advanced Programs at Lockheed Martin Brad Fiebig added, “This OpFires launch event is a critical step toward offering a missile that is ready to deliver hypersonic payloads in the Army’s mid-range spectrum.”

“In just 29 months, the DARPA-Lockheed Martin team has established controlled flight and demonstrated 70 percent of system capability.” The projectile did not achieve hypersonic speed in its first launch; however that was not necessarily intended, CNN wrote, citing an official. The outlet added that the primary goal was to launch the rocket from a ground vehicle. Further tests are scheduled later this year.