Single-crystal turbine blade technology for aero engines, dominated by US now mastered by China and India

In 2018, The American Society of Mechanical Engineers (ASME)  named the Pratt & Whitney single crystal turbine blade an historic mechanical engineering landmark. These blades, which can be found in many modern, high-performance gas turbines (a.k.a. jet engines)—including the ones powering the F-22 Raptor, and larger electricity-producing turbines—are grown from a single crystal in a vacuum casting furnace from superalloys. They increase the turbine’s efficiency and individual blade’s service life, while giving it unmatched resistance to high-temperature creep and fatigue.

All turbines operate on similar principles: A gas or other fluid turns a rotor, which can do useful work. In a jet engine, air is taken in and compressed, then fuel is added and combusted to heat the air, which then turns the rotor blades of a turbine. The hot exhaust is then expelled through a nozzle to create thrust.

Since it was invented, the aviation version of the gas turbine (a common workhorse for the generation of electricity) has been continuously upgraded by legions of engineers. One of the most fruitful paths toward better performance has been finding ways to increase thermal efficiency—the amount of fuel that actually turns into the desired output and not waste heat—by raising the temperature at which the jet engine operates.

Gas turbine thermal efficiency increases with greater temperatures of gas flow exiting the combustor and entering the turbine. In modern, high-performance jet engines, the temperature of this gas can exceed 1,650 degrees Celsius (nonaviation gas turbines operate at 1,500 degrees or lower, whereas military jet engines can reach 2,000 degrees, which exceeds the boiling point of molten silver).

Creating turbine parts that can survive extreme heat has been a major engineering challenge. Meeting it has required fundamentally rethinking the material structure of the turbine blades, making metals do things that they do not normally do in nature.

Since the 1950s, in high-temperature regions of the turbine, special blades and vanes are made from a combination of metals based on high-melting-point nickel. This material is called a “superalloy” because it retains strength and resists oxidation at extreme temperatures. The nickel in this superalloy has a crystal structure called a face-centered cubic, meaning it’s a cube with an atom at each corner and one at the center of each side. Other metallic elements are alloyed with nickel to produce a microstructure with two variant types, or phases, of crystals, one of which contains different elements at specific locations in the cubic crystal. When this phase is equally distributed in the larger nickel alloy, it helps stabilize the microstructure at elevated temperatures, resulting in high strength and corrosion resistance.

Such superalloys, when they are cast using conventional methods in a vacuum furnace to prevent oxidation, soften and melt at temperatures between 1,250 and 1,400 degrees. This temperature limit means blades and vanes closest to the engine combustor may be operating in gas path temperatures far exceeding their melting point, and thus must be cooled to typically eight- to nine-tenths of the melting temperature to maintain integrity. 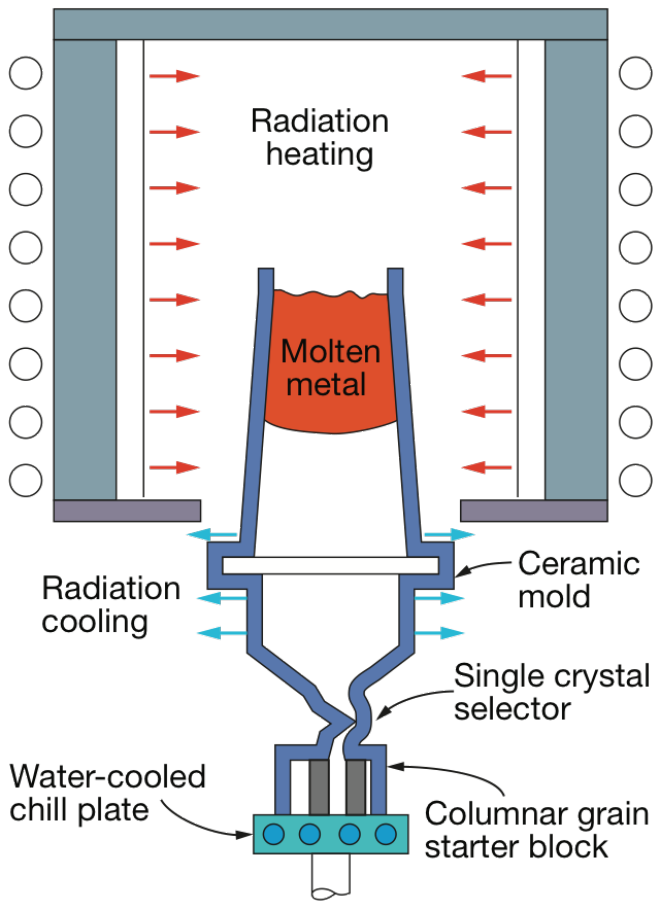 This schematic shows how manufacturers make single-crystal turbine blades in a mold inside a vacuum furnace.

Thus, engineers needed to design cast turbine blades with intricate internal passages and surface hole patterns that channel and direct cooling air (bled from the compressor) within and over exterior blade’s. To eliminate the harmful effects of impurities, blades are investment cast in vacuum chambers. After casting, the blade’s working surface is often coated with a ceramic thermal barrier that increases life and acts as a thermal insulator, letting inlet temperatures be 100° to 300°F or higher.

To create blades that can endure these extreme conditions, engineers began digging deeper into the structure of the blades themselves starting in the 1960s. Conventionally cast turbine airfoils are polycrystalline, consisting of a three-dimensional mosaic of small metallic crystals, or grains, formed during solidification in the casting mold. Each grain has a different orientation of its crystal lattice from its neighbors’. The interfaces between these crystals are most often not aligned along the crystals’ axes, resulting in what are called grain boundaries.

Untoward events happen at grain boundaries, such as increased chemical activity, slippage under stress loading, and the formation of voids. Among other problems, these conditions can lead to creep, an insidious life limiter: the tendency of blade material to deform at a temperature-dependent rate under stresses well below the yield strength of the material. Corrosion and cracks also start at grain boundaries. Thus grain boundaries greatly shorten turbine vane and blade life, and require lowered turbine temperatures with a concurrent decrease in engine performance.

But in the early 1960s, researchers at jet engine manufacturer Pratt & Whitney Aircraft (now called simply Pratt & Whitney, and owned by United Technologies Corporation) set out to deal with the problem by eliminating grain boundaries from turbine airfoils altogether. Its researchers invented techniques to cast single-crystal turbine blades and vanes, and designed alloys to be used exclusively in single-crystal form.

Pratt & Whitney then refined techniques to manufacture single-crystal turbine airfoils and overcome casting defects such as secondary grains or recrystallized regions. This early pioneering work has been carried on by other manufacturers and improved on over the past 40 years. Yields greater than 95 percent are now commonly achieved in the casting of single-crystal turbine airfoils for aviation gas turbines, which minimizes the higher cost of single-crystal casting compared to conventionally cast blades.

In the early 1970s, alloys specifically for single crystals were developed that eliminated carbon, boron, and zirconium, resulting in higher melting points, higher creep strength, and greatly improved high and low cycle fatigue resistance in the final blades and vanes. An alloy dubbed PWA 1484, which Pratt & Whitney developed in the early 1980s, consists (by weight) of nickel (59 percent), cobalt (10 percent), tantalum (9 percent), aluminum (6 percent), tungsten (6 percent), and a few other elements (10 percent). One of the others is rhenium (3 percent), which provides a significantly higher metal temperature capability.

In jet engine use, single-crystal turbine airfoils have proven to have as much as nine times more relative life in terms of creep strength and thermal fatigue resistance, and over three times more relative life for corrosion resistance, when compared to small-grained crystal counterparts. Modern high-temperature turbine jet engines with long life (that is, on the order of 25,000 hours of operation between overhauls) would not be possible without the use of single-crystal turbine airfoils. By eliminating grain boundaries, single-crystal airfoils have longer thermal and fatigue life, are more corrosion resistant, can be cast with thinner walls—meaning less material and less weight—and have a higher melting point temperature. These improvements all contribute to higher gas turbine thermal efficiencies.

Rolls-Royce, one of Pratt & Whitney’s competitors, considers such turbine blades one of their very high-value-added manufacturing core competencies. Computer programs can use a type of mathematical modeling called finite element analysis to further refine the single-crystal solidification process.

The newest chapter of the single-crystal story concerns their introduction in large gas turbines used in electric power plants. These units—producing as much as 500 megawatts of electricity, enough to power several hundred thousand homes—are using supersized single-crystal blades and vanes for both corrosion resistance and increased temperature capability, which add to efficiency. In more recent years, to increase thermal efficiency, electric power gas turbines inlet turbine temperatures have been increased to aviation levels, and so single-crystal airfoils with higher temperature capacity are now needed for long life.

The products produced by the company have a huge market because the US had blocked core production techniques, Zhang Zheng, chairman of the board of the Chengdu Aerospace Superalloy Technology, told CCTV. “Civil-military integration would boost not only the civil but also military aviation industry. It would be great achievement if China’s C919 passenger jumbo jet can be powered by domestic engines,” Xu said. It’s rare to see a private Chinese company master the technology used for aircraft engines, since most of technology of single-crystal turbine blades is in hands of State companies, Wang Yanan, chief editor of the Aerospace Knowledge magazine, said.

In a major technological breakthrough, the Defence Research and Development Organisation (DRDO) on Monday said it has developed single crystal blade technology and supplied 60 of such blades to the Hindustan Aeronautics Limited (HAL) as part of their indigenous helicopter development programme for helicopter engine application.

“It is part of a programme taken up by the Defence Metallurgical Research Laboratory (DMRL), a laboratory of the DRDO, to develop five sets, 300 in number, of single crystal high pressure turbine (HPT) blades using a nickel-based super alloy,” the DRDO said in a statement. The supply of the other four sets will be completed in due course, it said.

Very few countries such as the U.S., the U.K., France and Russia have the capability to design and manufacture such single crystal components, it said. The DRDO has been working for a long time to develop this technology which is a critical component in aero engines. Helicopters need compact and powerful aero-engines for operating at extreme conditions and to achieve this, state-of-the-art single crystal blades having complex shape and geometry, manufactured out of nickel based super-alloys capable of withstanding high temperatures of operation are used.

The DMRL undertook this development based on its expertise gained during the development of such a technology for an aero-engine project earlier. Complete vacuum investment casting process to realise the blades, including die design, wax pattering, ceramic moulding, actual casting of components non-destructive evaluation, heat treatment and dimensional measurement, has been established at the DMRL, the statement said. 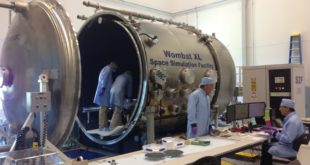