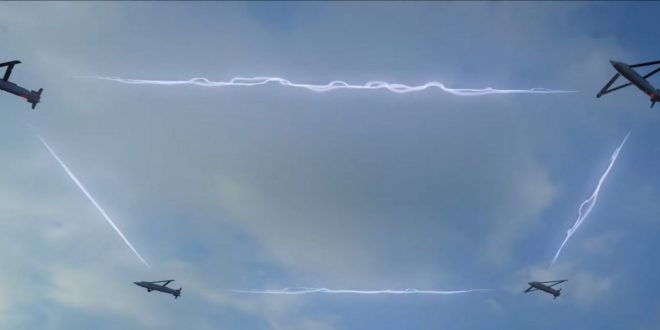 Current weapons generally fly a pre-designated mission. If the enemy does something unexpected, preprogrammed weapons are ineffective, and additional weapons may be required to complete the mission. Networked, collaborative and semi-autonomous weapons are advantageous since they observe and react to the enemy in real time, helping weapons overcome adversary defenses before the enemy can respond with effective countermeasures. This capability will enhance mission success rates by providing adaptability, flexibility and responsiveness in attacks and by increasing the speed and accuracy of target destruction.

Networked collaborative weapons share data, interact, develop and execute coordinated actions or behaviors. They use shared data to improve information across an entire group of weapons – sometimes called a swarm – thereby improving the effectiveness of the entire swarm. When each weapon shares measurements of a target’s location, combining this information reduces errors since it creates a more accurate target location for all to reference. Ultimately, this supports the use of lower-cost sub-systems in place of more expensive systems without sacrificing capability.

Here’s how Golden Horde would work: A pair of F-16 fighters might target a set of concrete aircraft shelters at an enemy air base. The first fighter targets four shelters with four Collaborative Small Diameter Bomb I (CSDB-1), destroying two. The second fighter, flying right behind the first, releases its CSDB-1s while the first jet’s weapons are already in the air. The second fighter’s bombs receive data that two of the shelters are destroyed. The second flight of bombs, consulting Golden Horde’s playbook, reassigns the bombs in flight to destroy the remaining shelters.

The result is a more efficient use of munitions, allowing bombs to direct themselves against unserviced targets. This makes it less likely that human pilots would have to make a second run on their targets, which is particularly important in defended airspace, where air defenses that might have been caught by surprise by the first attack could be on full alert for a successive attack.

Instead of bracing themselves to make multiple passes against an increasingly alert adversary, pilots can release their weapons and then concentrate on flying their jet home. The playbooks don’t allow Golden Horde-enabled weapons to be fully autonomous; they won’t look for new targets on their own. Instead, playbooks only allows weapons to make choices about striking existing targets: If Target A is not available, strike Target B, C, or team up with missile #7 to strike D. It’s reasonable to assume this might eventually grow to include new, last-minute targets selected by human battle managers.

The ability for Golden Horde weapons to actually make a choice is new to weapons and warfare. In the past, weapons were called “smart weapons” due to their use of onboard maps, lasers, or GPS data to find their targets. Golden Horde, however, takes things a step further by actually making decisions. While the weapons lack real cognitive thought and are forced to choose from a narrow set of “plays,” the weapons do make decisions nonetheless.

The Golden Horde program is one of AFRL’s three top priorities. The effort involves networking a swarm of munitions together and equipping them with an operational playbook, which gives them a set of predetermined rules for autonomous operations. AFRL Commander Brig. Gen. Heather Pringle said. “A major component of that is building a digital architecture that will allow more testing of various kinds of collaborative technologies and building in some containerized solutions that could be more plug and play across weapons. And I think ultimately that will allow a lot more flexibility.”

Golden Horde uses a collaborative autonomy approach referred to as “play calling.” A “play” is an established collaborative behavior enabled (or disabled) when certain predefined conditions are met by the swarm. Golden Horde uses a collection of plays called a Playbook. Loaded prior to the mission, the Playbook provides a choice of plays from which the weapons can choose. Golden Horde does not use artificial intelligence or machine learning to make determinations independently regarding which targets to strike. The system only selects from set plays and cannot violate defined Rules of Engagement.

The Golden Horde initiative, chosen as an Air Force Vanguard program in 2019, will integrate datalink radios and collaborative behaviors on inventory weapon systems to demonstrate the mission effectiveness of networked collaborative weapon capabilities for our warfighters. This effort will validate an integrated system where different technologies work together to defeat targets.

Demos began late 2020 and ultimately lead to an integrated capstone test event with CSDB-I and CMALD weapons working together to prosecute simulated targets in the fall of 2021. The Air Force conducted its first Golden Horde test Dec. 15. AFRL Commander Brig. Gen. Heather Pringle characterized that event as a “great learning opportunity.” Although the program met nine of 13 objectives during the December event, Pringle acknowledged that not everything in the first test went according to plan.

During the flight, an F-16 dropped two Collaborative Small Diameter Bombs, or CSDB, a version of Boeing’s laser-guided Small Diameter Bomb I upgraded with a collaborative autonomy payload. According to an Air Force news release, the bombs were able to establish communication links with each other and detected an initial target — a GPS jammer.

However, the munitions are designed with an autonomy module that allows them to respond to changes on the battlefield, and the bombs sighted two higher-priority targets, which had been determined by Air Force mission planners before the flight and programmed into the weapons’ rules of engagement. Unfortunately, due to software issues, the swarm was unable to transmit guidance commands to the navigation system, and the weapons struck a fail-safe target location instead.

Air Force is moving to use the new technology to develop and test weapons, too—building an online Colosseum in which vendors’ systems can virtually fight each other. Col. Garry A. Haase, head of the Munitions Directorate at the Air Force Research Lab, said AFRL plans to stage regular competition events in the Colosseum, each dealing with a different technology area. Each vendor could submit a digital twin of a proposed weapons platform for evaluation in “a kind of a Gladiator showdown, if you will, across that particular technology area,” he said during an AFCEA Northern Virginia luncheon March 2021.

Digital twinning involves creating a detailed virtual model of an aircraft, weapons systems, or other artifact, so that it can undergo initial testing without the time and expense of building a prototype. The Air Force’s new trainer jet, the eT-7 Red Hawk, was designed and underwent initial testing using the technology, with former Secretary Barbara M. Barrett boasting during AFA’s Air, Space & Cyber Conference that it had flown “thousands of hours before it [took] off,” and it was “assembled hundreds of times before any metal [was] even cut.”

To operate their digital twins in the Colosseum, while maintaining the integrity and confidentiality of their proprietary designs, vendors will have to build them to conform to a Government Reference Architecture, Haase explained. “It’s not us owning all your intellectual property or the technologies necessarily, but it’s owning how we interface with those systems,” he said. The reference architecture provides data standards and defines the interfaces the digital model can use, “so that we can more easily plug other people’s systems and subsystems into a bigger system” like the Colosseum.

The online Colosseum will be the next step in the AFRL’s Golden Horde program—developing networked, collaborative, autonomous (NCA) systems like swarming drones or “fire and forget” weapons, which find their own targets and then attack them in a synchronized fashion. Golden Horde is a Vanguard program—one of a handful of high-profile research projects the Air Force sees as the most promising for delivering new warfighter capability most quickly.

The second real world test of Collaborative Small Diameter Bombs, a CNA weapons systems being developed as part of Golden Horde, took place earlier this year, but the Air Force has said it currently has no plans to deploy CSDB technology on the battlefield. “I don’t have a good answer for you,” on when the first digitally developed weapons system might be fielded, Haase said, but he added the first one had already been developed.

The Gray Wolf is an “expendable platform”—basically a low cost cruise missile—designed to be easy to integrate with other weapons systems through a modular design approach called WOSAA, or weapons open system architecture approach. Gray Wolf was digitally designed “from the beginning,” Haase said. “We have a digital twin model of our Gray Wolf, which is what we have been playing in a lot of our scenarios.” Networked weapons systems will play a key part in the vision of a connected military enshrined in the plan for joint all-domain command and control, or JADC2. “The concept,” Haase explained, “is everything being connected and able to share data and communicate.”

Weapons are an important element of that JADC2 vision, Haase explained, “Because they may—especially longer range systems—may be the first system to get close to a threat or [into a denied] area, and therefore have the best intelligence data that then can be passed back into the network.”

All modern personal computers including desktops, notebooks, smartphones, and tablets, are examples of general-purpose computers. …