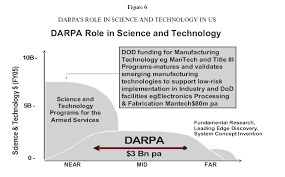 DARPA EEI is Nurturing the Innovation Base

Rajesh Uppal March 12, 2022 Industry Comments Off on DARPA EEI is Nurturing the Innovation Base 101 Views

DARPA pursues game-changing technologies and capabilities in a way that provides a surprising advantage for U.S. and Allied warfighters and at a much faster pace than the state of the art. DARPA’s work with the Services and other agencies aims to meet not just known but as-yet unrecognized needs and move swiftly to deployment. That includes an increased emphasis on prototyping and joint projects – and, especially, a tighter emphasis on designing, building, and testing aspects of technology. DARPA also seeks to promote continued American innovation throughout the broader S&T ecosystem of university and industry partners.

In February 2021, DARPA launched an expansion of EEI with the goal of accelerating 150 DARPA-backed technologies out of the lab and into products that promise to fundamentally change the way we live, work, and fight. The initiative augments technical research teams
with critical entrepreneurial expertise, top-tier commercialization mentors, and provides connections to investors. This important work helps to counter aggressive foreign investors by building stronger companies that have the ability to attract U.S. capital.

“Embody’s EEI program participation was transformational, allowing us access to market data, business forecast modeling and our first commercial hire. This was critical to accelerate our evolution into a commercial-stage company. The EEI Program is a valuable extension of DARPA’s mandate to create disruptive market-focused companies,” said Jeff Conroy, CEO of Embody, a startup whose technology was funded by DARPA and is pioneering next-generation regenerative medical devices for the repair of tendon and ligament injuries.

EEI will move from a pilot to a permanent project with the support of IQT Emerge, an arm of the not-for-profit venture capital firm In-Q-Tel and whose mission is to connect the U.S. government innovation channel with entrepreneurship. In this effort, DARPA is teaming with IQT Emerge, a new organization within In-Q-Tel (IQT) that provides entrepreneurial expertise as well as connections to early-stage U.S. investors. IQT Emerge leverages IQT’s unique place at the intersection of venture capital, government, and the startup community to keep the national security community at the forefront of technology innovation.

Simon Davidson, EVP IQT Emerge, said, “By working with IQT Emerge, scientists in DARPA’s Embedded Entrepreneurship Initiative will gain access to strategic business and product development insights that help them move their innovations from early research to commercial use. We’re excited about our partnership with DARPA which we believe will contribute greatly to U.S. national security.”

EEI provides catalytic funding, mentorship, and investor and corporate connections for select DARPA researchers. Resources include: an average of $250,000 in non-dilutive funding to hire a seasoned entrepreneur or business executive for one to two years with the goal of developing a robust go-to-market strategy for both defense and commercial markets; dedicated commercialization mentors with extensive
private sector experience; and engagement with DARPA’s private sector Transition Working Group comprising over 100 top-tier U.S. investors and corporations key to scaling and supply chain development.

DARPA-funded scientists and engineers are an invaluable resource for national competitiveness. Supporting these researchers with tailored business expertise to advance their innovations for public and military use is critical to obtain the full benefit from taxpayer-funded R&D investments.

“DARPA’s Entrepreneurship Initiative was instrumental for Probius in defining our platform and go-to-market plans as well as attracting additional U.S. capital to achieve significant milestones and establish production domestically. This would not have been possible without the critical market intelligence brought by EEI’s senior commercialization advisors and their broad customer and investor networks,” said Emmanuel Quevy, CEO of ProbiusDx, a spinout from Stanford University that developed a quantum-enabled, AI-driven, bioanalytical platform for early detection of COVID-19 and sepsis biomarkers.

The EEI’s growth is illustrative of the Department of Defense view that tech projects in areas such as AI, 5G and 6G telecommunications are essential to the U.S. economic and military over the next century, according to DARPA Commercial Strategy Chief Kacy Gerst. “More and more DARPA is investing in spaces that have a massive commercial market and a small defense market, like for example, microelectronics and biotechnology,” Gerst said in an interview. “If we want the DOD to be able to use these technologies in the future, they need to be sitting within sustainable businesses.”

Since 2018, roughly the same time frame from the inception of EEI, DARPA has also stepped up its outreach to university researchers. Security concerns in recent years have significantly increased the barriers to university research for the DoD, and better communication of opportunities and expectations is critical to minimizing those barriers. DARPA’s academic outreach initiative began in earnest with visits to a handful of public universities.

During the pandemic, however, the agency was forced to change tactics and hosted a large virtual event in September 2020 called the “DARPA Vice Presidents and Chancellors of Research Summit.” The Summit attracted 223 representatives from 126 schools across the nation; twenty percent of the schools had never done business with the agency. During the three-hour summit, participants learned
about the agency’s near-term investment priorities and how to pursue funding opportunities through existing contract vehicles.

In addition to small business and university outreach efforts currently underway, DARPA also has three formal programs aimed at supporting the next generation of researchers. The first effort is the Joint University Microelectronics Program (JUMP). JUMP is a major public/private initiative that includes several leading companies from the semiconductor and defense industries such as Intel, IBM, Micron, Analog Devices, EMD Performance Materials, ARM, Samsung, TSMC, Raytheon, Northrop Grumman, and Lockheed Martin who have tasked six research centers to undertake high-risk, high-payoff research that addresses existing and emerging challenges in microelectronic technologies. JUMP comes at an inflection point in the history of the semiconductor industry where application and system research are critical to enabling the development of superior electronic systems to meet DoD and commercial needs.

Under JUMP, the challenges of the “application-centric” research centers focus on accomplishing application-oriented goals and spurring the development of complex systems with capabilities well beyond those available today. Diving deep into cognitive computing, intelligent memory and storage, distributed computing and networking, and radio frequency (RF) to terahertz (THz) sensor and communications
systems, among other areas, these research centers are developing systems that will be transferable to military and industry in a five year timeframe and ready for field deployment in ten years.

Also, earlier this year, DARPA announced a post-doctoral fellowship program for talented young scientists, engineers, and mathematicians in the field of computer science with grants sized to support each fellow for up to two years. Participation in DARPA’s new program is open to current U.S. citizens and permanent residents who have received a Ph.D. degree no earlier than June 2019 or who will have received a Ph.D. prior to the date of award, and who will be appointed to a postdoctoral position at a U.S. institution of higher education during the 2021-22 academic year.

The longest-running program that DARPA has supporting university researchers is the Young Faculty Awards (YFA), which has been providing funding opportunities since 2006 as a forward-looking way to familiarize rising researchers in junior positions with national-security-relevant work within the DoD. The YFA program provides funding, mentoring, as well as industry and DoD contacts to awardees early in their careers with the long-term goal of developing the next generation of academic scientists, engineers, and mathematicians who will focus a significant portion of their career on national security issues. To date, 447 researchers from 40 states have participated in the YFA program.

“The technologies being developed at Dive demonstrate great utility across the defense and commercial markets,” says Simon Davidson, EVP at IQT Emerge. “We are excited to see how this collaboration will help accelerate the progression of innovative technologies, like AUVs, to market.”

In April 2021, Dive Technologies launched the DIVE-LD commercial AUV in a Robot-as-a-Service model which has been pursued and contracted by defense and commercial customers for seafloor data collection. Amongst others, the US Navy, DARPA, and other government customers have partnered with Dive to fulfill challenging seafloor data acquisition needs. The pier-launched, long range, 6,000m depth rated DIVE-LD is ideal for commercial operations including oil and gas pipeline inspections and offshore wind cable route and pre-construction surveys.

@Rajesh Uppal@idstch
Previous Challenge of Attribution of Malicious Cyber Actors amidst growing Cyber attacks and Cyberwarfare
Next US DOD developing Mobile and sensor technologies for continuous, real-time assessment of the health and performance of warfighter on the battlefield