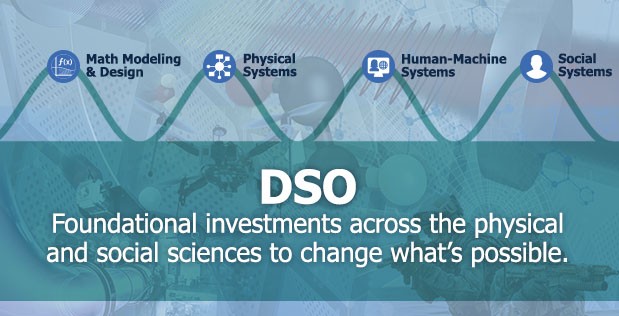 DARPA’s Defense Sciences Office (DSO)—whose mission is to identify and pursue high-risk, high-payoff research initiatives across a broad spectrum of science and engineering disciplines—launched  Disruptioneering in Spring 2017  which pushes for faster identification and exploration of bold and risky ideas with the goal of accelerating scientific discovery. The goal of Disruptioneering is to increase the pace of innovation by taking a PM’s fully-fledged scientific insight from idea inception to award in fewer than 90 days. Under the new concept, DSO program managers intend to develop small programs of $5 million or less in total funding on an expedited timeline, with an initial target of less than 90 days for progressing from idea inception to contract award and a downstream target of fewer than 75 days. Disruptioneering also responds to the 2018 National Defense Strategy’s call to “deliver performance at the speed of relevance.”

DSO programs can often take six months or longer after receipt of proposal for contracts to be signed and for work to begin. “Since DARPA program managers only have three to five years to pursue their potentially game-changing ideas, we want to do everything possible to cut the time from idea inception to when research can start,” Fuller said. “Disruptioneering programs should serve as a great additional framework to enable program managers to make a quick initial investment to investigate novel scientific ideas. If the idea turns out to be promising, it could become the basis for a larger program.”

Disruptioneering awards are limited to $1 million and an 18-month period of performance. Disruptioneering programs will follow a standard format: a three- to six-month first phase to initially assess a novel idea, potentially followed by a second phase of 12 to 15 months, if results from the first phase warrant further exploration and investment. “For this new Disruptioneering effort, the time from program announcement to when research proposals are due has been shortened to as few as 30 days, and the technical section of proposals can’t exceed eight pages,” said Kristen Fuller, DSO’s assistant director for program management. “To make the process as straightforward as possible, we’ve streamlined contracting and internal processes to meet an aggressive schedule. We’ve also developed standardized Disruptioneering templates for cost analysis and other requirements and included them as an appendix in DSO’s Office-Wide BAA.”

“There’s a vast waterfront of research in science and technology that we’re constantly scanning and probing for the next big discovery,” said Tyler McQuade, acting director of DSO. “These Disruptioneering ‘mini-programs’ are designed to quickly explore some of the most radical and potentially highest-payoff ideas to see if there’s something there to be pursued further. The goal is to speed up the tempo of innovation and ultimately to reduce risk by making smaller targeted investments that could lead to quantum leaps forward in technology for national defense.”

The initiative’s first two programs were Fundamental Design (FUN DESIGN) and Imaging Through Almost Anything, Anywhere (ITA3). FUN DESIGN aimed to investigate new fundamental computational and mathematical building blocks for representing novel and optimized designs of mechanical systems. ITA3 seeked to determine the 3-D resolution/range trade space based on the use of all-pervasive low-frequency, electromagnetic waves, combined with simple computational methods to consider the challenge of imaging through metal containers, walls, ground, fog, water, and other complex media.

Due to the successes demonstrated in rapidly executing on ideas through Disruptioneering, the techniques were also employed under DARPA’s Artificial Intelligence Exploration (AIE) program when it kicked off in between 2018 and MTO’s Microsystems Exploration program which kicked off in 2019.

DSO has announced a total of 10 Disruption Opportunities (DOs). Several of these Disruptioneering projects have resulted in new discoveries with the potential to lead to DARPA follow-on programs, but one in particular has already made that leap. Awards under Dr. Anne Fischer’s Molecular Scaffold Design Collective (MSDC) Disruptioneering effort were made in Summer 2018. The goal of MSDC was to assess a new model of government-industry-academic collaboration for design, synthesis, and testing of energetic materials. A key result of the MSDC research was the delivery of gram-scale quantities of 19 novel energetic precursors to DoD research labs in just the first four months of the program, something that might take a year by conventional methods. The new approaches to chemical synthesis and collaboration models within the energetics community developed under MSDC ultimately resulted in 51 molecules being delivered to government partners, some of which have been scaled by government labs and are still under development for U.S. energetics needs.

The success of MSDC made it clear a larger program to advance energetics development was necessary and feasible. DSO issued the solicitation for Dr. Fischer’s Rational Integrated Design of Energetics (RIDE) program on March 11, 2020, with proposals expected by May 8, 2020. The goal of RIDE is to transform U.S. energetics research approaches and capabilities by developing safe, semi-automated experimental capabilities that integrate energetics ingredient synthesis with formulation development and testing, along with
theoretical, experimental, and/or statistical methods that allow safe, accurate evaluation of key energetics properties at reduced scale. The hope is with these new capabilities in hand, DoD scientists will be able to safely and rapidly develop new high performance energetics needed for currently fielded platforms and build new capabilities for future systems.

NAC aims to develop innovative research concepts that exploit the interplay between dynamic behaviors and intrinsic material properties
to develop powerful new forms of  computation. The ability to harness physical processes for purposeful computation has already been demonstrated at lab-scales. NAC seeks to apply these concepts to computation challenges that, for fundamental reasons, are poorly suited to, or functionally unexplored with, classical models.

NAC will lay the foundation for advancing new theories, design concepts and tools for novel computing substrates, and develop metrics for
comparing performance and utility. If successful, NAC will demonstrate the feasibility of solving challenging computation problems with ordersof-magnitude improvements over the state of the art.

Accurate multi-physics simulation codes are essential for understanding the behavior of complex DoD systems, but they are generally not
available from the commercial sector and have to be custom built. Current approaches to building simulation codes scale poorly with the number of interacting physics involved and often introduce inaccuracies that are difficult to trace and quantify.

In addition, most of these DoD systems are test limited, and “bDARPA’s Computable Models program aims to investigate and quantify the benefits of new and emerging mathematics and algorithms to enable direct generation of accurate and efficient multi-physics, multiscale (time and space) simulation codes for complex physical systems relevant to DoD.

Based on current quantum mechanical models, the energy density of the quantum vacuum is predicted to be high. Recent advances in fabricating material nanostructures and cavities have fueled the study of vacuum fluctuation-driven phenomena, indicating that the energy density can be modified locally. QUEST seeks rigorous predictive models that lead to testable experiments confirming whether energy or momentum transfer mechanisms are possible exploiting this background.