Tank has been a mainstay of modern militaries, providing a unique capability of high lethality, protection and mobility. It’s heavy gun, can fire high explosive shells to destroy adversary’s tanks , it is heavily armored itself protecting crew from enemy fire and and it can move off roads since it has tracks rather than wheels. However Tanks have always been under threat from anti-armor weapons, in fact since the creation of the main battle tank during World War I, there has been a constant arms race between the development of anti-armor weapons and vehicle protection systems. However  recently “Weapons’ ability to penetrate armor, has advanced faster than armor’s ability to withstand penetration”. Survivability of tank and persons manning them is increasing coming under threat due to long range, high lethality and accuracy of Anti-Tank Guided Missiles.

Therefore, militaries are looking towards new concepts to keep tanks relevant to meet the challenges of future warfare. One of the technology being used to enhance the survivability is Active Protection Systems, or APS, that uses sensors and radar, computer processing, fire control technology and interceptors to find, target and knock down or intercept incoming enemy fire such as RPGs and Anti-Tank Guided Missiles, or ATGMs. Many militaries are also turning to unmanned tanks to reduce the threat to tanks.

Russia’s military has a new armed robot tank that outperformed manned vehicles in recent exercises, Colonel Oleg Pomazuev told the Russian news site Military Review. The tank, known as the Nerehta, can be fitted with a 12.7mm or 7.62mm machine gun or an AG-30M grenade launcher, according to Defense One. Additionally, Russia has created a semi-autonomous tank called the T-14, which is larger than the Nerehta and features an unmanned turret. The tank also has an “active protection system,” automatically scanning for nearby threats and firing countermunitions if facing incoming anti-tank missiles or rounds.

Russia’s new T-14 Armata tank represents “the most revolutionary step change in tank design in the last half century,” says a leaked report of the British military intelligence obtained by The Sunday Telegraph newspaper in London. “For the first time, a fully automated, digitised, unmanned turret has been incorporated into a main battle tank,” The Sunday Telegraph quotes the report. “And for the first time a tank crew is embedded within an armoured capsule in the hull front.” “As a complete package, Armata certainly deserves its billing as the most revolutionary tank in a generation,” the report says.

The US Army has also been testing the vehicle, known as Ripsaw. The ‘drone tank’ is controlled remotely, and can reload itself and even change weapons at the touch of a button. The unmanned vehicle, can drive up to 1 kilometer ahead of various types of formations. Bob Testa of the Remote Weapons Branch of the Armament Research, Development and Engineering Center said. ‘We cut the copper cable and made it wireless so that the vehicle and weapon can both be driven remotely,’ said Testa, explaining how it works.

President Recep Tayyip Erdogan has instructed the Turkish defense industry to develop a home-produced unmanned tank, and has criticized NATO states’ reluctance to share modern military technology with their ally Ankara. Turkey has lost many soldiers in Syria over the years, due to the vulnerability of their mainly German-produced tanks.

India’s Defence Research and Development Organisation (DRDO) has developed a new unmanned tank for surveillance missions, mine detection and reconnaissance in areas with nuclear and bio threats. The tank called Muntra has three variants. While Muntra-S is India’s first tracked ground vehicle developed for unmanned surveillance missions Muntra-M is for detecting mines. Muntra-N is for operation in areas where there is a nuclear radiation or bio weapon risk. 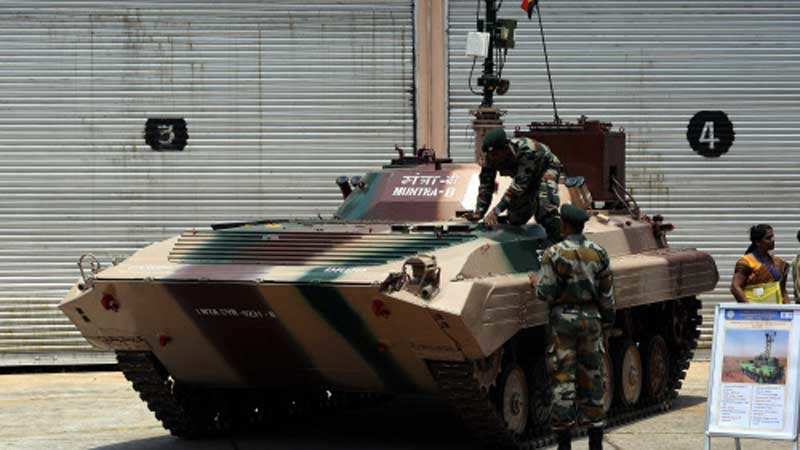 Recently Chinese military personnel were testing new remote-control technology with ageing Type-59 tank. State media said the Chinese military was investigating how to network the tanks to aircraft and satellites to work in a quicker and more lethal way than human driven versions. The Global Times newspaper quoted Liu Qingshan, chief editor of Tank and Armored Vehicle, as saying: “A large number of due-to-retire Type 59 tanks can be converted into unmanned vehicles if equipped with artificial intelligence.”

However, even using satellite Using a satellite data-link is not nearly as viable a command and control communications solution for unmanned ground systems as it is for airborne ones. Mountains, and structures, and even foliage, can still block data-transmission and the available bandwidth would limit the number of vehicles that could be used at any given time. The radio communications further are vulnerable to cyber electromagnetic attacks.

Looking out beyond Challenger 2 all the ‘future’ studies indicate that there will be an enduring need for mobile and survivable fighting vehicles,” says William Suttie from the UK’s Dstl. mix of future ground-based warfighting capabilities and key contributors to reducing the risks to troops and also, by improving sensing and targeting, cutting the danger of collateral damage. “There will, however, be an enduring need for ‘boots on the ground’ to interact with the local population,” Suttie says, and policy is that all engagement decisions will have a ‘human in the loop’ – hence no autonomous weapons.”

In the near futures, the U.S. Army plans to deploy packs of semi-autonomous robot tanks armed to the brim with chainguns, missiles, and other fearsome weaponry. The U.S. Army is building RCV lights, mediums, and heavies. Respectively, the three are lightweight scouting vehicles, heavily armed mini tanks, and powerful artillery vehicles. 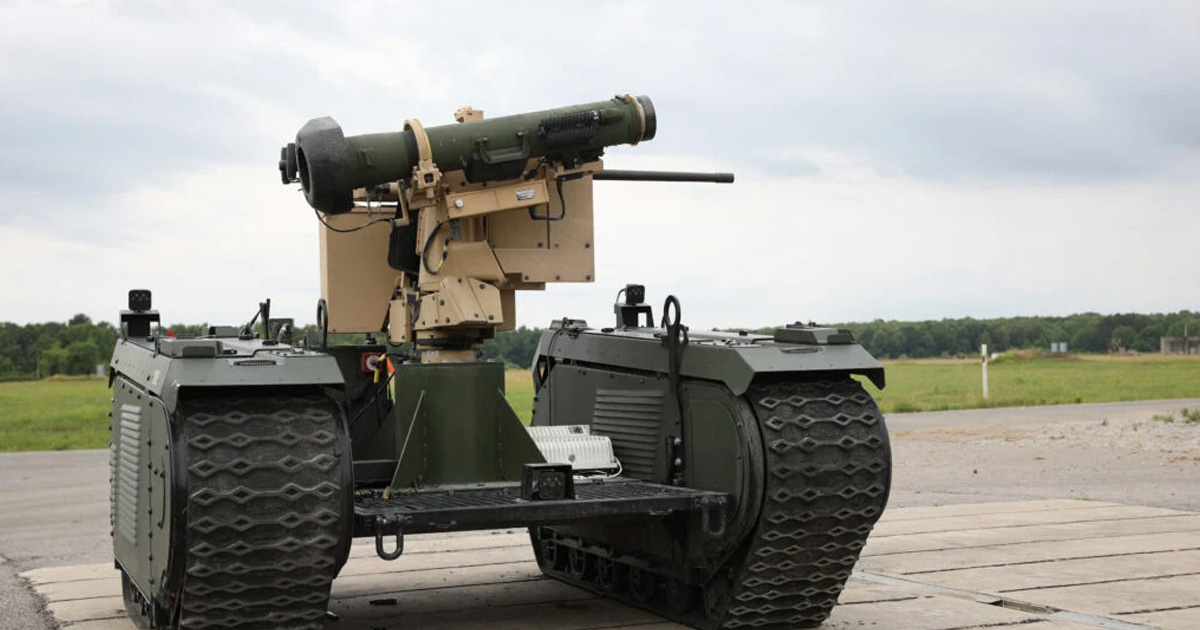 As they make their way to future battlefields, Major Corey Wallace explained at a conference in Nov 2020, they’ll be used to lead the charge in both conventional and electronic warfare in the years to come. For now, the Army wants to make sure that it’s a human pulling the trigger on the weapons, Breaking Defense reports, so each vehicle will have one human remotely steering and another remotely operating their weapons. The tanks will still be partially autonomous, but humans will take over once they reach the front lines or to steer them through enemy fire.

In addition to more conventional battles, the Army wants the RCVs to take down swarms of drones. An anti-drone laser was too heavy for the RCV light, so instead the Army is looking for ways to jam electronic communications and render drones useless. “Yes, you are very lethal [if you] blow the … turret off a tank,” Wallace said, “but you are even more lethal if you paralyze that formation’s ability to communicate.”

he Russian military will reportedly complete the trials of its multi-functional projectiles for its latest Derivatsiya-PVO anti-aircraft system later this year. The gun is capable of firing smart munitions to fight air targets more effectively than other anti-aircraft platforms. The platform is primarily designated to fight drones, cruise missiles and aircraft weapons in the close-in zone, but the anti-aircraft artillery weapon platform is also capable of striking ground targets. 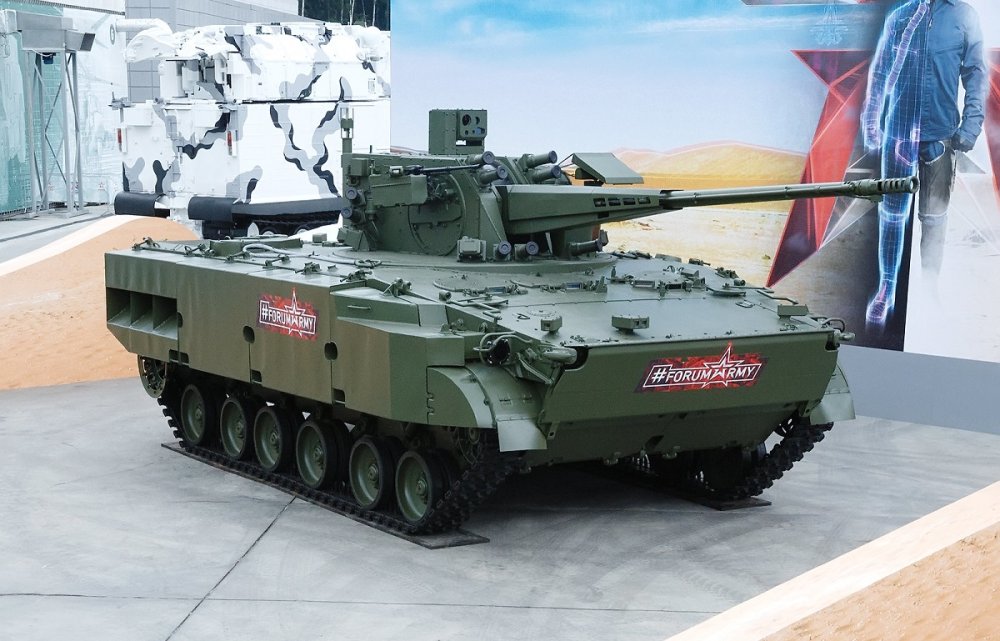 The Derivatsiya-PVO requires no radar station and features an onboard optoelectronic guidance and reconnaissance system and the advanced fire control technology, which boosts its stealth properties: it can effectively spot targets in any conditions with the help of its 2S38 TV and thermal imaging channels, while it can also staying radar invisible to the enemy.

Russia’s Derivatsiya-PVO is formally a kind of self-propelled artillery tasked with an anti-air mission. In addition to the 57mm main gun, the Derivatsiya-PVO’s secondary armament is a 7.62mm Kalashnikov PKTM machine-gun with an ammunition load of 500 rounds to fight infantry. A 9T260 transporter-loader vehicle has been created for the Derivatsiya-PVO to deliver several ammunition loads at a time and quickly reload the combat vehicle directly on the battlefield.  In the works for years, the Derivatsiya is based on the chassis of the BMP-3 infantry fighting vehicle.

Russia’s TASS reported that the Derivatsiya will be the basis for a fully automated robotic vehicle, built to fight other robots. Building a robot to fight small flying robots is a broader strategy that takes advantage of what automation should, in theory, be prioritized for: attacks coming in too fast for humans to react, and coming from vehicles that don’t have humans on board. Leaving the vehicle with the possibility of humans crewing it allows automation to be in place when needed, while keeping controls available for humans to take over for other missions.

“The MOD has been discussing the robotization of practically all major military vehicles — tanks, IFVs and self-propelled gun/artillery systems — due to their increasing digitization,” says Samuel Bendett, an adviser to the CNA Russia Program who specializes in Russian unmanned military systems. “That is, most have sophisticated computerized C4ISR equipment that allows for their transformation into optionally-manned, or fully unmanned vehicles down the line. As a relatively new system. ‘Derivatsya’ falls into that category.”

“Derivatsya will get a UAV/UGV complement for better ISR as part of a recent trajectory of unmanned military systems development in Russia – the pairing of larger ground vehicles with smaller unmanned aerial and ground assets,” says Bendett, a CNAS Adjunct Senior Fellow who researches applications of Russian military unmanned system and AI. “For example, the T-14 Arnata tank is supposed to have its own UAV for better ISR. Recent tests by ARF [Russia’s equivalent to DARPA] on the Marker UGV platform included the pairing of the main vehicle with UAVs and UGVs.”

The UK Army showed off its first unmanned tanks which can be used to take out the enemy and resupply troops. Using driverless car technology it can find its own way to a location using cameras to avoid obstacles or can be steered by a squaddie using a remote control. The weapon system could see the end of the human controlled tank saving lives and millions of pounds – as it costs just 10 per cent. One Army source said: “This could be the end of the tank.”

The £15million research project carried out on Salisbury Plain, Wilts, also showcased the tech to remotely drive a 35-tonne Warrior tank up to speeds of 46mph. In one scenario it could be used like Kit from Knightrider – told to steer itself to a location to pick up and extract a squad of infantrymen. 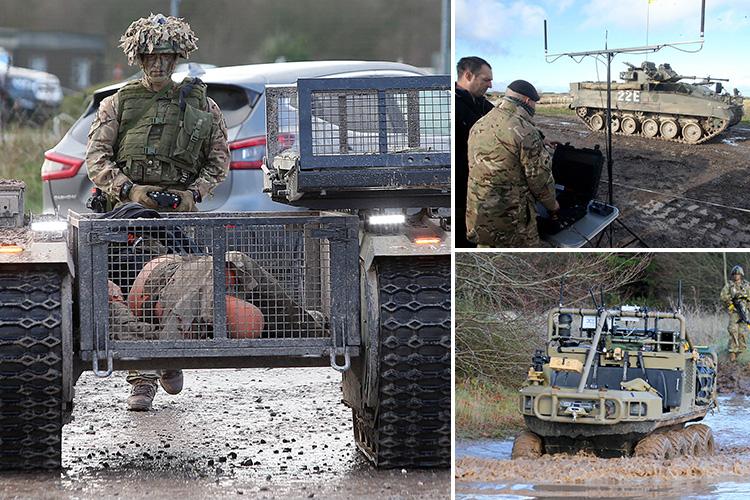 Mr Andrew said: “This technology means we can cover a much wider area and advance more quickly. “It enables us to ensure that we’re in the most dangerous areas reducing the number of personnel at risk.”

Tech used in driverless cars allows robots to travel to a waypoint, using a mix of cameras and a “mind map” to pick the best route to avoid obstacles. Defence procurement minister Stuart Andrew was among those watching the demonstrations which included a six-wheeled amphibious vehicle called the Hippo – remotely operated to take heavy kit to the front line.

The coming of robotic tanks is another element of ongoing military revolution, the robotization of warfare where increasingly unmanned ground, air and land systems are being used for various mission and particularly to fight other robots heralding the arrival of robotic warfare