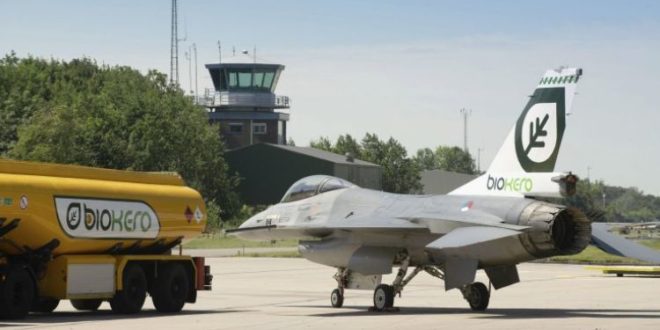 Biofuels are regarded as promising alternative to satisfy growing energy demands. Biomass derived biodiesel and bioethanol can be successfully utilized in modem vehicle engines with little or no modifications and thus contribute to lower combustion emissions in comparison to the former. Adequate production not only serves as long term replacement of fossil fuels, but it also offers novel opportunities to diversify income and fuel supply sources, promotes rural employment and notably helps in reducing green house gas (GHG) emissions.

Biofuels can also contribute to military renewable drive. Department of Defense (DoD) had embarked upon an ambitious program of expanded renewable energy generation on bases and in the field, with a goal of producing 25% of its energy from renewable sources by 2025.

The three military-spec biofuel refineries in the US, which were financed by the US government under the Defense Production Act, are aiming to produce roughly 100 million gallons this year. For 2016, the Navy has purchased just under 80 million gallons of the 10/90 biofuel blend, about 6 percent of the 1.3 billion gallons of fuel the Navy uses annually. The Navy paid $2.05 per gallon, which is roughly in line with the cost of regular marine diesel thanks to robust biofuel subsidies .

US DOD announced in Jan 2017, a $55-million funding opportunity for a 10 million gallon biorefinery capable of producing advanced drop-in bio-equivalent fuels suitable for military use. Proposals may take the form of either brown field expansion/modification of existing pilot-scale facilities, commercial-scale facilities, or new green field construction. Attention will be paid to enhancing merchant supplier capabilities in order to effectively serve the broad Department of Defense (DoD) and non-DoD communities.

Back in 2014, the DoD awarded $210 million under the Defense Production Act to Emerald Biofuels, Fulcrum BioEnergy and Red Rock Bio towards the construction of biorefineries that produce cost-competitive, drop-in military biofuels. Under the grants, the companies will build biorefineries to produce military spec fuel that is expected to cost the U.S. military, on a weighted average, less than $3.50 per gallon — or cost competitive with petroleum-based fuels, with availability expected as soon as 2016, and have a 50 percent or greater reduction of emissions compared to conventional fuels.

The new project is aiming at “a complete value chain including feedstock production, chemical conversion and processing, and fuels blending, transportation and logistics.” The DoD has indicated “that it intends to purchase biofuel blends that meet approved specifications…[importantly], cost competitiveness of the biofuel with conventional petroleum derived fuels is a primary DoD objective.”

The total enterprise envisioned in this effort must include a capability to blend the neat biofuel product with petroleum-based equivalent fuels, if required in order to meet approved certifications and specifications, and thus furnish a ready for use, drop-in biofuel blend. Capabilities and/or facilities to store and transport the resulting product must also be an element of the project.”

The targeted fuels will be for military operational use, and as such, must be either currently approved/certified or are likely to be approved and certified MILSPEC JP-5, MILSPEC JP-8, approved for U.S. military use ASTM D1655 / D7566 Jet A/A1 and/or MILSPEC F-76 equivalents by the time a commercial-scale IBPE would become operational.

Arleigh Burke-class guided missile destroyer, the USS Stockdale (DDG 106), has become the first US Navy ship to run on an alternative fuel blend as part of its regular operations, following the launch of the Great Green Fleet. US Navy Secretary Ray Mabus said: “The Great Green Fleet shows how we are transforming our energy use to make us better warfighters, to go farther, stay longer and deliver more firepower. In short, to enable us to provide the global presence that is our mission.”

The fuel used in the Great Green Fleet initiative is derived from waste beef fat and feedstock of beef tallow procured from farmers and ranchers in the midwest. It also consists of traditional petroleum, provided by Tesoro. US DOD announced in Jan 2017, a $55-million funding opportunity for a 10 million gallon biorefinery capable of producing advanced drop-in bio-equivalent fuels suitable for military use.

The existing JP-10 super-fuel for military aircraft has numerous advantages including high energy density, good thermal stability and low freezing point, but it costs more than US$7,000 per tonne – nearly 10 times as much as ordinary jet fuel for commercial aircraft. It is used mainly in cruise missiles and ramjet or scramjet engines on new-generation aircraft travelling at hypersonic speed, or five times faster than sound.

Scientists from the Dalian Institute of Chemical Physics, at the Chinese Academy of Sciences in the northeastern province of Liaoning,  say they have developed a technology to convert bio-waste into fuel for missiles and hypersonic planes,  with the cost  as low as US$2,547 per tonne,  or reducing fuel costs by as much as 60 per cent. Using agricultural and forestry residues including bran, chaff and mill dust, Professor Zhang Tao, Li Ning and colleagues discovered new chemical processes that can turn the waste to JP-10 fuel on a large scale with unprecedented efficiency.  Liu, who conducts research on engine technology for hypersonic vehicles but was not involved in the Dalian study, said the reduction of production costs for jet fuel was usually incremental and it was quite rare to see a significant drop.

Combining these methods with the latest technology in biomass conversion, the researchers said, the super-fuel can be mass-produced at a price equivalent to that of some of the bio-jet fuels already in commercial use, thanks to government subsidies provided for their environmental benefits. At present, the super-fuel comes from coal tar or naphtha, and the synthesis is extremely costly and unfriendly to the environment.

“We believe that the future commercialisation of bio-JP-10 fuel is very promising, especially taking policy support and exemption from CO2 emission tax into consideration,” the authors wrote in the paper. Liu Huoxing, professor at the school of energy and power engineering at Beijing University of Aeronautics and Astronautics, said civilian applications of hypersonic flight technology faced many challenges that remained to be solved, with the problem of high fuel prices being one of the headaches. “No airline will buy a plane if the fuel costs too much, however fast it can fly,” he said.

India, which imports up to 80 percent of its oil needs, will spend $1.5 billion on setting up biofuel refineries that are expected to employ around 15,000 people. Prime Minister Narendra Modi said on August 2018 that ethanol blending could help the country save $1.7 billion a year on import bills.

In a first, experimental test pilots and test engineer of the Indian Air Force (IAF) flew an Antonov-32 military transport aircraft using ethanol blended air turbine fuel (ATF)  in Dec 2018. This fuel is made from Jatropha oil sourced from Chattisgarh Biodiesel Development Authority (CBDA) and then processed at CSIR-IIP, Dehradun,” the IAF said in a statement.

The project is a combined effort of IAF, the Defence Research and Development Organisation (DRDO), the Directorate General Aeronautical Quality Assurance (DGAQA) and CSIR-Indian Institute of Petroleum; joining the call by the Indian Prime Minister Narendra Modi to increase the use of biofuels and ethanol-blended fuel to lower import costs. Earlier on August 18, India’s first 72-seater biofuel-powered civilian aircraft successfully completed its hour-long journey from New Delhi to Dehradun raising the prospects for early adoption of the sustainable alternative fuel by the country’s aviation sector. The flight flew on 25% biofuel and 75% ATF.

India’s oil minister announced on September 8 that 12 bio-refineries were being set up and steps were being taken to achieve 10% ethanol blending. “Soon, Bio-ATF and Bio-CNG policies will be formulated,” Minister Pradhan said.

Furthermore, the Indian government, in May  2018, approved a new policy expanding the scope of raw material for ethanol production by allowing the use of sugarcane juice, sugar-containing materials like sugar beets, sweet sorghum, starch-containing materials like corn, cassava, damaged foodgrains like wheat, broken rice, and rotten potatoes that are unfit for human consumption for ethanol production.

The Indian Navy put up its bio diesel powered fast attack craft for display at the international fleet review, with the deft boats maneuvering with ease at fast speed around the President’s yacht, displaying that the alternate fuel has not reduced performance.

“The two Fast Interceptor Crafts are a testimony to Indian Navy’s commitment to adding a green footprint to its operations,” the Navy spokesperson said. The Navy said that the use of alternate fuels as part of its Green Initiatives Programme has been underway for a while in collaboration with the Defence Institute of Bio-Energy Research (DIBER), a DRDO lab based at Haldwani. The Biodiesel developed by the lab from the Jatropha Curacas plant was blended 20 percent with normal diesel as part of the trial program which is take up the green component progressively.

“The trials have been successfully conducted on vehicles at INS Shivaji, a Diesel Generator onboard a Fuel barge at ND(Mbi), a shore generator at ND(Vzg) and on two Fast Interceptor Crafts at Vizag, over the past one and a half year,” the Navy said. It added that the performance of equipment with Biodiesel blend is not less than that operating on normal diesel, but with lesser emissions.