Indian Defense Ministry report had warned of the “grave threat” posed by the Chinese navy in the Indian Ocean. It suggested that China is widening its orbit of patrols beyond Chinese waters to jockey for control of highly sensitive sea lanes. In mid-2016, Indian naval officials said they were sighting Chinese subs four times every three months on average.  Some are seen near India’s Andamans and Nicobar Islands that lie near the Malacca Straits, the entry to the South China Sea through which more than 80 percent of China’s fuel supplies pass.  The Indian Navy has tracked at least six Chinese submarines in the IOR, with an operational turn-around stop mainly at Karachi, over the last four years, as was earlier reported by TOI. To operate in the Indian Ocean, Chinese submarines need to sail through either the Malacca, Lombok or Sunda Straits where the shallow depth of the waters international regulations mean that they have to remain surfaced or visible.

The presence of Chinese nuclear attack submarines in the Indian Ocean reinforces Beijing’s aggression in competing with India for dominance in a region strategically vital to India’s security. History has time and again highlighted the importance of islands in establishing naval dominance. Given their close proximity to the Malacca Straits and Southeast Asia, the Andaman and Nicobar Islands have always been strategically important. Busy shipping routes such as the Ten Degree Channel are remarkably close to the islands. About 1,20,000 ships pass through the Indian Ocean each year and nearly 70,000 of them pass through the Malacca Strait. 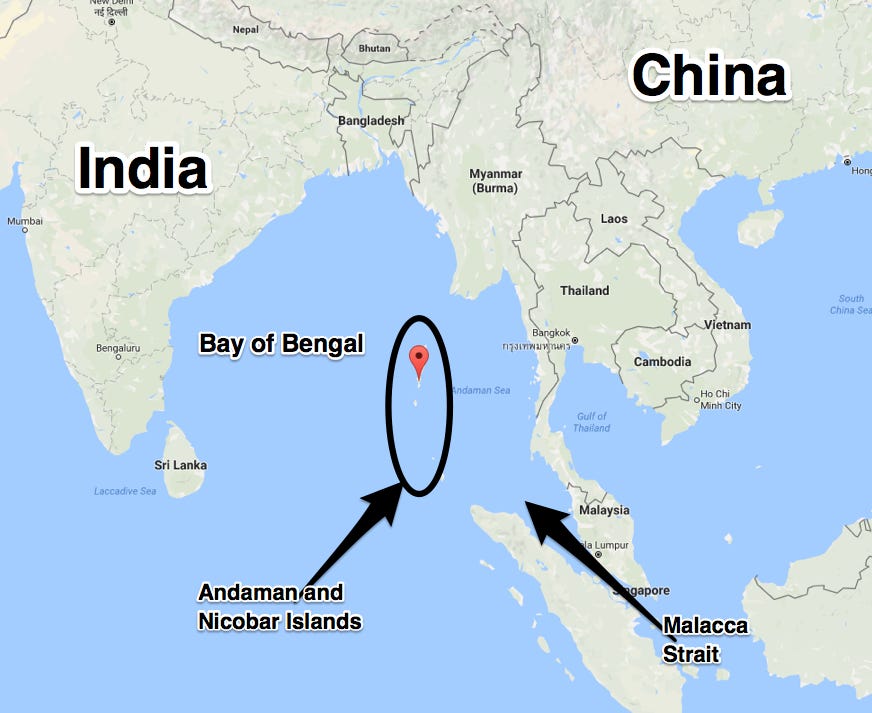 Located as it is, the island chain acts as a physical barrier that secures busy Sea Lines of Communications by creating a series of chokepoints: The Preparis Channel in the north, the Ten Degree Channel between the Andaman and Nicobar island groups and the Six Degree Channel to the south. While the first two sea lanes are used infrequently by commercial shipping, all vessels that pass through the Malacca Strait must traverse the Six Degree Channel.

The ongoing border conflict between India and PLA troops is making New Delhi re-evaluate Andaman and Nicobar Island’s role as India’s critical military base that overlooks China’s vital sea lanes. These “choke points” of China can be quickly blocked, if required, by Indian warships and aircraft operating from the Andamans, writes experts. The Strait of Malacca is the lifeline of China, and if India along with regional allies especially the US can restraint the vital shipping lane, China will be left high and dry. China realises that and that is the reason why Beijing is investing billions of dollars in the CPEC project, to open land route via Pakistan which is now also under threat due to the border clashes. China is  building $46-billion China-Pakistan Economic Corridor (CPEC)  that will give Beijing access to the Indian Ocean through Gwadar besides running through Pakistan-occupied Kashmir.

India is now looking to fast-track plans for basing additional military forces in the strategically-located Andaman & Nicobar archipelago, along with the requisite development of infrastructure, as an effective counter to China’s expanding strategic presence in the Indian Ocean. A per latest reports by Time of India, India is working to fasten plans for deploying additional defence personnel in Andaman & Nicobar Islands and boosting infrastructure to counter China’s growing presence in the Indian Ocean Region while getting prepared for any possible clash. 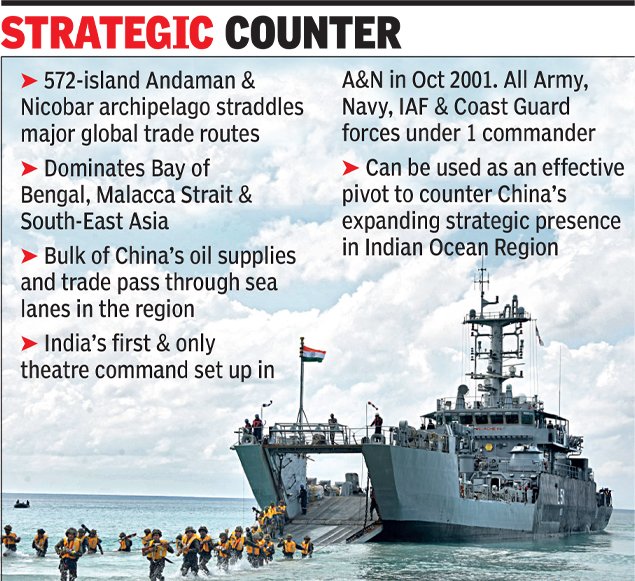 Indian Air Force opened a new airbase at Thanjvur in southern state of Tamil Nadu in Jan 2020. The IAF has deployed its most modern combat jet Sukhoi 30 MKI at the newly opened airbase, with aim to counter growing Chinese presence in Indian Ocean region and Malacca straits and  boost the safety of peninsular India. Sukhoi 30 MKI has a range of 1,500 kilometers without mid-air refueling and with the IL 78 tankers they can loiter and cover a big part of Indian Ocean and Malacca Strait.The Sukhoi fighters are equipped with lethal Brahmos missiles that have a range of 300 kilometers, providing enough punch to the force to deter any adversary in the aerial and maritime domains.

IAF Chief RKS Bhadauria said Thanjavur airbase was chosen for deployment of Thanjavur airbase because of its strategic location. Thanjavur Airbase is less than 150 kilometers from the northern most point of Sri Lanka and about 1,500 kilometers from Andaman and Nicobar Islands, the home to India’s first tri-services command that is located between the Bay of Bengal and Andaman Sea, giving the country ability to monitor traffic passing through Malacca Strait.

India is seeking out collaborations, not just for strategic reasons, but also to bolster the development of “smart islands” — a concept that looks to develop a sustainable model for islands catered toward generating islands’ economies and protecting their unique biodiversity.

While the Andaman and Nicobar Islands have tremendous strategic value, India also recognizes the need to develop them commercially. Moreover, given the islands’ environmental and tribal welfare constraints and concerns, the only practical solution is to develop them in a sustainable manner, to the point that they have their own independent economy.

The Government has constituted Island Development Agency (IDA) an apex body, under the chairmanship of Hon’ble Home Minister, in June 2017, which has mandated NITI Aayog to steer the Holistic Development of Islands program.

The focus on holistic development will foster growth of tourism in the region, invigorate the economic potential of the islands and provide remunerable job opportunities to the inhabitants. Eco-tourism activities sensitive to the ecology, bio-diversity and the strategic locations of the islands are being promoted through this initiative. The government is supporting not only tourism-based initiatives through single window-clearances and information system, but other integrated aspects related to physical and digital connectivity are also being addressed.

One of the first projects sanctioned under this government has been the submarine optic fibre cable running between Chennai and Port Blair. This project will allow the islands to have considerable bandwith for telecom and internet services both for e-government initiatives and tourism. The islands currently have poor digital connectivity adding to the remote and secluded characteristic of the ANI. The project is slated to be completed by December 2018 and will reportedly cost 1102.38 crore. Along with digital connectivity, the state of physical connectivity, especially between the islands, is particularly pitiful. There is a significant amount of work still required to develop the islands in areas as basic as electricity and water to elevate the conditions of these islands.

Geopolitically, the Andaman and Nicobar Islands connect South Asia with South-East Asia.  India’s presence in these islands therefore expands the Indian Navy’s reach into Southeast Asia, consolidates its presence over the Malacca straits, and provides potential to further expand into the Southern Indian Ocean. India’s maritime security strategy paper, which was released in January 2016, rightly emphasised the strategic significance of the islands and underlined their importance as a basis for Indian power projection into the Western Pacific and beyond.

The Andaman and Nicobar chain of islands could be used as a basis for Indian maritime power projection into the Indo-Pacific and even beyond into the south-west Pacific.

As Andaman and Nicobar is the only Tri-Command structure overseen by the Integrated Defence Staff, the military strength at present is evenly distributed among the three services, despite the fact that the Indian Navy’s stake runs deeper. Further, the unified scope of a Tri-Command Service further facilitates co-operation with other powers in the Indo-Pacific, such as Japan, Australia and the United States, including the possibility for more joint exercises.

The Indian Navy in Jan 2019 commissioned the new air base — INS Kohassa — in the Andaman and Nicobar islands as part of efforts to expand operational presence in the Indian Ocean where China has been increasing its military presence.

Navy chief admiral Sunil Lanba  commissioned  the new base, called INS Kohassa, about 300 km (180 miles) north of the archipelago’s capital, Port Blair, the navy said in a statement. This aim of this third air base in the Andaman and Nicobar islands is to beef up surveillance of Chinese ships and submarines entering the Indian Ocean through the nearby Malacca Straits, military officials and experts said.

The facility, the third in the islands, will have a 1,000-metre runway for helicopters and Dornier surveillance aircraft. But eventually the plan is for the runway to be extended to 3,000 metres to support fighter aircraft and longer-range reconnaissance aircraft, navy spokesman Captain D.K. Sharma said.

At Andamans, that lie near the entrance to the Malacca Straits, to counter the Chinese challenge, India has deployed ships and aircraft since Prime Minister Narendra Modi took office in 2014 promising a more muscular policy.

India is expected to exploit the military potential of the islands by taking following actions:

Apart from converting the Andaman and Nicobar Islands into a military base, India is enhancing collaboration with Japan and United States by undertaking joint projects with them. India and the United States are in talks to help each other track submarines in the Indian Ocean, military officials say, a move that could further tighten defense ties between New Delhi and Washington as China steps up its undersea activities, as reported by Reuters.  New Delhi earlier had agreed to open up its military bases to the United States in exchange for access to weapons technology to help it narrow the gap with China. US is world leader in anti-submarine warfare technology and has long experience in tracking ultra-quiet Russian submarines.

US can install  sound surveillance sensors (SOSUS) in the vicinity of the islands. This is an important element of controlling the Indian Ocean operation of China’s South China Sea Fleet and to monitor its activities. Australia could join in the installation of the sound sensors as this will also help Australia in projecting its influence in the Indian Ocean and, in so doing, to aid in tracking the movements of Chinese submarines in the wider Indo-Pacific region.

The co-operation between India, the United States and Japan in the Andaman and Nicobar Islands may not stop with the installation of acoustic systems and it is expected that a joint project collaboration on laying an undersea optical fibre communications cable from Chennai to Port Blair could eventuate. Once completed, this network is likely to be integrated with the existing US-Japan “Fish Hook” network that was created specifically to monitor People’s Liberation Army-Navy submarine activity in the South China Sea and the Indian Ocean Rim.

There is also enthusiasm for greater minilateral cooperation, such as the Australia–India–Japan and Australia–India–Indonesia trilateral dialogues (recently upgraded to a ministerial conversation). A maritime security operations working group has also been established. At a more tactical level, improvements have been made in maritime domain awareness (MDA) following the two countries’ White Shipping Agreement. This has resulted in inputs six times each day into India’s maritime ‘information fusion centre’ tracking merchant vessels. In September 2020, an India-France-Australia dialogue was also initiated, involving three capable resident maritime states in the Indian Ocean, at the level of foreign secretaries.

@Rajesh Uppal@idstch
Previous Earthquakes, the natural disasters that cause immense damage to life and property on Global scale, Scientists are trying to predict them
Next New UAV command and control technologies, satellite BLOS links and Multi-Domain Multi-Platform Drone Control

Remote sensing means that we aren’t actually physically measuring things with our hands. We are …