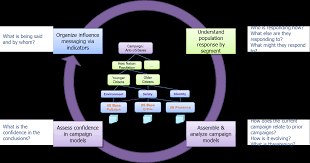 With billions of people around the world accessing platforms such as Facebook, WhatsApp, Twitter, and Instagram, to name a few, social media has become a powerful force for political and cultural change, and a force that is more than capable of influencing global geopolitics. In the past three years alone, propaganda and disinformation spread on social media platforms have resulted in Russian interference in the 2016 presidential election and a deepening of the partisan divide in politics in the United States, created justification for the Qatar blockade, sowed violence against both individuals and religious or ethnic groups in countries like Myanmar, India, and Sri Lanka, and played a role in a number of protests that have led to government changes, such as in Sudan.

Certainly, neither disruptive technologies nor the weaponization of information to influence events are new developments. In the 13th century A.D., Genghis Khan, leader of the Mongol Empire, ordered each soldier to carry three lit torches at night to make his army appear larger. But, psychological warfare used to mislead, intimidate, demoralize, or otherwise influence the thinking or behavior of an enemy has traditionally fallen within the purview of nation states, and such techniques were restricted to use during times of war or periods of geopolitical conflict between countries.

There are three main trends driving the conversation about the significant geopolitical threat of digital disruption. The first is the ability of non-state actors, or indeed, even a few individuals, to use new technologies to wield influence or shift political outcomes on a large scale. The second trend is that of authoritarian governments using new technologies, or even simply restricting access to the internet, to repress human rights, quash dissent, and discredit political opponents. The third trend is state actors using new technologies to spread disinformation to discredit political opponents, bury opposing views, and influence foreign affairs with regularity, not just during times of war.

“The U.S. is engaged with its adversaries in an asymmetric, continual war of weaponized influence narratives,” said Brian Kettler, the Information Innovation Office (I2O) program manager leading INCAS. “The combination of connectivity and modern media has greatly amplified the potential effects of geopolitical influence campaigns on populations. As adversaries seek to exploit misinformation as well as true information delivered via influence messaging, U.S. analysts need automated tools to help detect and make sense of adversarial influencer campaigns – allowing them to move away from largely manual and ad hoc approaches.”

The announcement from the Defense Advanced Research Projects Agency (DARPA) for a project called INfluence Campaign Awareness and Sensemaking (INCAS) will use an automated detection tool to unveil influence operations online. INCAS program will develop techniques and tools that enable analysts to detect, characterize, and track geopolitical influence campaigns with quantified confidence.

Today, geopolitical influence campaign detection and sensemaking is largely manual and ad hoc. Analysts use social listening tools to formulate complex keyword queries; track trending keywords, hashtags, and topics; and read hundreds to thousands of documents to identify influence themes. New or “low and slow” campaigns are hard to detect early as their message volume may be beneath platform “trending” thresholds and pertinent hashtags may be unknown. With current tools, it is difficult to connect messages over time and across multiple platforms to track evolving campaigns and to assess confidence in analytic conclusions in a rigorous manner. Confidence assessment by analysts is ad hoc, manual, subjective, qualitative, and susceptible to analyst cognitive biases (e.g., confirmation bias). Analyst reports often cover static time ranges, and static reports quickly become stale.

With current tools, analysts must manually sift through a high volume of messages to find those with relevant influence agendas then gauge which ones are gaining traction and with whom. Analysts track population response using digital marketing tools for analyzing audience demographics, interests, and personality. These tools lack explanatory and predictive power for deeper issues of geopolitical influence. Audience analysis is often done using static, demographic segmentation based on online and survey data. This lacks the flexibility, resolution, and timeliness needed for dynamic geopolitical influence campaign detection and sensemaking.

INCAS aims to provide analysts with the ability to detect, characterize, and track geopolitical influence campaigns across multiple languages and platforms with confidence. The program plans to take on this technical research challenge across five research areas.

Technical area one focuses on using automated influence detection to enable analysts to analyze influence campaigns. The second area will “dynamically segment” the population that is responding to influence campaigns, and identify “psychographic attributes relevant to geopolitical influence,” such as “worldviews, morals and sacred values.”

The first is focused on the development of tools that enable analysts to directly and automatically detect implicit and explicit indicators of geopolitical influence in multilingual online messaging. Research teams working in this technical area will be led by SIFT, Protagonist Technology, and University of Southern California ISI.

The INCAS tool’s third technical area will assist analysts in linking influence indicators and population response over time across several platforms, in order to capture influence campaigns as they evolve over time. The fourth area will create infrastructure to provide data feeds from online sources to the other three technical areas, and the final technical area will conduct technology evaluations and will not be competed as part the the BAA.

The third research area will focus on the development of analyst-guided influence campaign modeling tools that accelerate analysts’ ability to detect and link influence indicators and messaging with population response over time and across multiple platforms. Researchers led by Uncharted Software will aim to create data modeling tools with rich human-machine interfaces (HMI) that allow analysts to assemble and compare campaign models and maintain confidence in the assessment.

Under the fourth research area, Lockheed Martin Advanced Technology Laboratories was selected to develop a testbed as well as provide social media messaging and other data feeds that the research teams can use to develop and evaluate their INCAS tools.