Brazil is the largest and most important nation in South America, with 35 percent of its total population, 47
percent of its total size, and nearly half of its total GDP. It is the largest and most populous country in the continent; and it benefits from a favourable geographic position, important natural resources and a growing economy. As such, it is taking a more active international role both in the region and beyond. Similarly, its 7,500 kilometres-long coastline on the Atlantic Ocean enables Brazil to easily project its power abroad and to engage in lucrative maritime trade.

Brazil’s key advantage over the other emerging powers is that the international strategic threats it faces are fewer and less dangerous. Brazil, does not face threats as overt and obvious as China’s, Russia’s, or India’s. Whereas the other BRIC countries face threats which take the conventional forms of military conflict, resource competition, etc., Brazil settled all its border conflicts in a series of diplomatic feats in the 19th and early 20th century, and has since
played the role of a mediator in territorial conflicts between neighboring countries.

None of its neighbours represents a real threat, and not only because relations are generally good: Brazil is simply more powerful than any of them. Even Argentina, the second most influent country in the continent, cannot seriously challenge Brazil’s supremacy due to a worse geopolitical and economic situation. This has caused Brazilian governments to conclude that the principal threats faced by the country are not of a security and defense, but of economic nature.

Brazil’s  most potent security threats are drug-trafficking, arms smuggling and guerrilla activity in a lawless frontier region in the Amazon. In a recent survey, almost half of Brazil’s foreign policy elite named the “internationalization” of the Amazon as a “critical strategic threat” . It also  faces internal challenges; notably corruption, criminality, inequality and others; all of which may undermine its rise as a great power.

In the last decades, Brazil has become a regional military and economic power in South America, accounting in 2017 for the largest defence budget in the region, the eleventh defence expenditure in the world, and almost 60% of South American GDP.

Brazil is the main power in South America also in military terms. It spends regularly more than 1.32% of its GDP on defence, and it possesses large and well-equipped armed forces who remain politically influential.

The Brazilian government has recently approved measures to release BRL1.65 billion to the country’s defence ministry to enable several important activities within the armed forces to be funded. Brazil previously imposed a freeze of BRL5.8 billion to its 2019 defence budget.

The BRL1.65 billion now cleared will be spent in support of several activities within the armed forces, such as border control, organ transportation, field training exercises, and the fight against illegal activities; construction projects over several Brazilian states, including building and repairing roads, sustainment of military units across the country; and funding a range of important ongoing procurement efforts.

The Army includes, among others, specialized units for jungle warfare and a vast park of vehicles. It also maintains the Strategic Rapid Action Force, ready to be deployed anywhere in the country at a short notice.

In recent years, due to better relations with Argentina and in accordance to its strategy to extend its power westwards, it has relocated many units in the Amazon area. The Air Force operates fighters, cargos and airborne warning & control planes. But the Navy is the most notable component of the Brazilian military, as it is a powerful mean of power projection. Today, it includes diesel-electric submarines, landing ships and a helicopter carrier plus naval aviation and marines; and it also plans to deploy a nuclear-powered attack submarine by 2025.

Brazil has historically relied on domestic defense firms to supply its police and military- with yearly sales reportedly totaling some $52 billion.

Finally, Brazil also possesses a considerable defence industry and carries on its own space program.

The Brazilian National Defence Policy is the ‘set of State measures and actions, especially within the military field, to ensure the defence of the territory, sovereignty and national interests, mainly against foreign threats, potential or manifest’. There were two important objectives of this policy, first of ‘developing a defence industrial base to ensure autonomy in vital technologies’. Second, it defined that the Armed Forces should be structured ‘around capabilities,
providing them with personnel and material in accordance with strategic and operational planning’

The Brazilian National Defence Strategy (Brasil 2008), in turn, outlined several measures to ensure the achievement of the objectives set by the Brazilian National Defence Policy (Brasil 2005). The measures were built upon three interdependent major structuring drivers, namely the reorganisation of the Armed Forces; the reorganisation of the defence industrial base; and the Armed Forces personnel policy.

Bolsonaro will meet U.S. President Donald Trump in the White House on Tuesday during a visit aimed at strengthening economic, political and military ties between his right-wing government and Washington. The status of “major non-NATO ally” (MNNA) gives a country preferential access to the purchase of U.S. military equipment and technology, including free surplus material, expedited export processing and prioritized cooperation on training.

The MNNA designation would ease the transfer of defense technology at a time when Brazil’s aerospace industry has forged new ties with the United States, including a planned tie-up between Boeing Co and Brazilian planemaker Embraer SA on both defense and commercial aircraft

A satellite program co-developed by China and Brazil is hailed by experts as a role model for BRICS cooperation, as strengthening ties in science, technology and innovation among the BRICS countries has become priority for the upcoming 11th BRICS summit to be held here.

The China-Brazil Earth Resources Satellite (CBERS) program developed by the China Academy of Space Technology (CAST) and National Institute for Space Research (INPE) of Brazil is bound to inspire more scientific and technological cooperation between China and Brazil and also among the BRICS countries.

Carlos Pereira, Brazilian satellite expert and manager of the CBERS program told Xinhua that the cooperation started in 1988, when Brazil and China signed a partnership agreement to develop, build and operate two remote sensing satellites — CBERS-1 and CBERS-2 — and since then the program has already developed six satellites.

According to Han Bo, a research fellow at CAST for the CBERS program, the sixth satellite, CBERS 04A, which will be launched into the sky, has made full use of the space technology achievements of China and Brazil. Han told Xinhua that the CBERS 04A is an optical remote sensing satellite with large width and high accuracy, developed jointly by China and Brazil and will be operating on the sun-synchronous orbit at a height of 628 km.

“The load of the satellite is designed according to the specific needs of Chinese and Brazilian users. Being equipped with high, medium and low resolution loads, the satellite can meet the specific needs of application of China and Brazil in the areas of natural resources, geology and mining, forestry, agriculture, environmental protection and disaster reduction,” he added.

Pereira also believes that after being put into operation, the satellite will contribute to economic development, environmental protection, urban planning, and disaster prevention and reduction in both China and Brazil. “The CBERS program establishes a complete remote sensing system to supply both countries with multi-spectral remote sense image, and has made Brazil the largest distributor of free satellite images in the world,” he added.

CAST is the first institution in China to undertake the task of developing spacecrafts. INPE, headquartered in the Brazilian city of Sao Jose dos Campos in Sao Paulo State, is an institution specializing in space scientific research and spacecraft development. It has the best satellite assembly and test center as well as the best researchers in South America.

Since the end of the 1980s, the two institutions have joined forces to carry out the CBERS program and have developed a management method for high-tech aerospace programs which transcends borders and cultures. This partnership has been hailed as a model for South-South cooperation in the space industry. According to Pereira, all system-level activities, such as assembly integration and testing, system specifications, and project revisions, are carried out jointly by INPE and CAST.

To help deepen relations between the two countries in the future, Han said that CAST will continue to work closely with INPE in a cooperative, win-win, and inclusive manner and enhance satellite usage by providing better remote sensing data and services to users in both countries.   Pereira believes more cooperation can be had in space weather, new joint satellite projects and research and training projects. Pereira, Han and other members of the CBERS program team are making final preparations to ensure the successful completion of CBERS 04A launch mission.

The theme of this year’s BRICS summit to be held on Nov. 13-14 is “Economic Growth for an Innovative Future.” BRICS is the acronym for an emerging-market bloc that groups Brazil, Russia, India, China and South Africa. 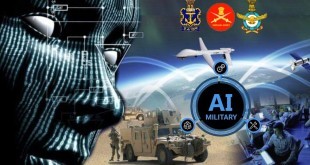 AI can provide significant societal and economic benefits to Nations. It is predicted that the …