Super-fast quantum computers and communication devices could revolutionize countless aspects of our lives. Quantum technological applications are based on various quantum phenomena and physical laws to which elementary particles are subjected.

The extraordinary promise of quantum technology—depend on quantum “entanglement,” in which the physical states of two or more objects such as atoms, photons or ions become so inextricably connected that the state of one particle can instantly influence the state of the other—no matter how far apart they are.  Entanglement links the strange states of tiny quantum mechanical objects. For example, a top can spin either clockwise or counterclockwise, but an atom can spin both ways at once—at least until it is measured and that two-way state collapses one way or the other. Two atoms can be entangled so that each is in an uncertain two-way state, but their spins are definitely correlated, say, in opposite directions. So if physicists measure the first atom and find it spinning clockwise, they know instantly the other one must be spinning counterclockwise, no matter how far away it is.

Today, entanglement is actively being explored as a resource for future technologies including quantum computers, quantum communication networks and high-precision quantum sensors. Particle entanglement is a prerequisite for the quantum revolution that is on the horizon, which will also affect the volumes of data circulating on the networks of the future together with the power and operating mode of quantum computers.  Entanglement takes place when a part of particles interacts physically. For instance, a laser beam fired through a certain type of crystal can cause individual light particles to be split into pairs of entangled photons.

Entanglement would be key to a fully quantum internet that would let quantum computers of the future communicate with one another and be immune to hacking. If hackers messed with communication, they would spoil the entanglement, revealing their presence. Various companies already sell systems that send messages in quantum states of light that are largely unhackable. But to use such links, the information must still be decoded at each network node, which is potentially vulnerable. In a quantum internet, any node could be entangled with any other, so messages between them couldn’t be decoded at intermediate nodes.

The concept of entanglement can also be applied to photons, leading to applications in secure quantum communication,  quantum computation and high-precision sensor technology. In order to bring these technologies into application, compact and efficient sources of entangled photon pairs are needed to transmit and manipulate information and  that can be integrated into photonic circuits. Entangled photon pairs are important for the realization of quantum communication

The use of entangled photons for quantum cryptography was proposed by Arthur Ekert in 19916. Ekert’s protocol, known as E91, includes a photon pair entangled in polarization with paths split so one photon is received by Alice and the other by Bob. To ensure a secure
connection is present, a Bell’s theorem is performed to check for eavesdroppers. This protocol was first implemented in by Kwiat et al. in 19995 . This experiment showed the viability of Ekert’s protocol as well as an exploration of potential eavesdropping strategies.

The realization of next generation envisaged projects towards the implementation of world-wide quantum network through the ground to satellite and or inter-satellite links require development of compact and robust entangled photon sources with high brightness and entanglement visibility. Over decades, a variety of schemes have been proposed and implemented for entangled photons, however, the polarization entangled photon sources realized through the spontaneous parametric down-conversion (SPDC)in second order, (χ
2),bulk nonlinear crystals remains the most appropriate choice.

In parametric down conversion, a pump laser is aimed at a material with optical nonlinearity, creating two photons where the conservation of momentum and energy determine the wave vector relation between the two photons. A crystal is pumped by a suitable short wavelength laser, pairs of long wavelength photons are created simultaneously, travelling in correlated directions, and correlated in energy. Detection of one of the photons can be used to gate its partner thus producing a source rich in time tagged single photons. A problem with this source is the randomness in the emission times of the pairs. The process occurs with small probability (10−12 or less) inside a handful of optical materials with nonlinear optical susceptibilities, such as KDP, LiIO3, and BBO.

A 100mW ion argon pump beam is incident on a pair of orthogonally polarized type I Beta Barium Borate crystals. As the pump beam interacts with these nonlinear crystals, single photons split into entangled “signal” and “idler” photons with wavelengths longer than the pump. Because a type I crystal is used, the polarization of the signal and idler photons will be identical but opposite of the pump polarization. SPDC photon pairs are also produced simultaneously. This property may be utilized as a trigger for the detection of this event. By adding a pair of avalanche photodiodes (APDs) in the paths of the entangled photons, an incidence of SPDC may be measured. With the inclusion of variable polarizers set in the beam paths of the entangled photons, a verification of the violation of Bell’s inequality can be reached.

“However the photon pair generation events are unpredictable (being associated with vacuum fluctuations) and contain contributions from multi-pair events. Indeed the probabilities of single- (P1) and multi-pair (P>1) events are both related to the mean number of pairs created per pump pulse μ. They both increase with μ, and P>1 increases more rapidly (to leading order it grows quadratically rather than linearly). Therefore, these sources are usually operated in the μ<<1 (and thus P1<<1) regime to minimize the multi-photon noise.”

Since, theparametric gain of χ 2nonlinear processes are low, efforts have been made to improve the brightness of the entangled photon sources by using different nonlinear crystals in bulk and waveguide structures, in different phase-matching geometries including type-I, type-II and type-0, and different experimental schemes. As, the length and nonlinearity are two important crystal parameters highly influencing the gain of the SPDC process for a given pump laser, the brightness of the entangled photon sources have been significantly improved over the years through the use of long periodically poled crystals engineered for high effective nonlinearity.

Researchers at Stevens Institute of Technology have done just that, not only creating a chip-based photon source 100 times more efficient that previously possible, but bringing massive quantum device integration within reach. “It’s long been suspected that this was possible in theory, but we’re the first to show it in practice,” said Yuping Huang, Gallagher associate professor of physics and director of the Center for Quantum Science and Engineering.

To create photon pairs, researchers trap light in carefully sculpted nanoscale microcavities; as light circulates in the cavity, its photons resonate and split into entangled pairs. But there’s a catch: at present, such systems are extremely inefficient, requiring a torrent of incoming laser light comprising hundreds of millions of photons before a single entangled photon pair will grudgingly drip out at the other end.

Huang and colleagues at Stevens have now developed a new chip-based photon source that’s 100 times more efficient than any previous device, allowing the creation of tens of millions of entangled photon pairs per second from a single microwatt-powered laser beam.

“This is a huge milestone for quantum communications,” said Huang, whose work will appear in the Dec. 2020 issue of Physical Review Letters. Working with Stevens graduate students Zhaohui Ma and Jiayang Chen, Huang built on his laboratory’s previous research to carve extremely high-quality microcavities into flakes of lithium niobate crystal. The racetrack-shaped cavities internally reflect photons with very little loss of energy, enabling light to circulate longer and interact with greater efficiency.

By fine-tuning additional factors such as temperature, the team was able to create an unprecedentedly bright source of entangled photon pairs. In practice, that allows photon pairs to be produced in far greater quantities for a given amount of incoming light, dramatically reducing the energy needed to power quantum components.

The team is already working on ways to further refine their process, and say they expect to soon attain the true Holy Grail of quantum optics: a system with that can turn a single incoming photon into an entangled pair of outgoing photons, with virtually no waste energy along the way. “It’s definitely achievable,” said Chen. “At this point we just need incremental improvements.”

Until then, the team plans to continue refining their technology, and seeking ways to use their photon source to drive logic gates and other quantum computing or communication components. “Because this technology is already chip-based, we’re ready to start scaling up by integrating other passive or active optical components,” explained Huang.

The ultimate goal, Huang said, is to make quantum devices so efficient and cheap to operate that they can be integrated into mainstream electronic devices. “We want to bring quantum technology out of the lab, so that it can benefit every single one of us,” he explained. “Someday soon we want kids to have quantum laptops in their backpacks, and we’re pushing hard to make that a reality.”

The main components of quantum photonic systems, such as mirrors, beam splitter and phase shifters, can all be realized in integrated form by now. However, this does not yet apply to the light sources and detectors that are required as well. “Our goal is now to integrate all the functions needed for quantum communication, i.e. the generation, manipulation and detection of single and entangled photons, into just one chip,” explains Dr. Thorsten Passow, project manager at the Fraunhofer Institute for Applied Solid State Physics IAF. The researchers are taking a first step with regard to light sources with the project “Quantum entangled photon pair source at telecom wavelength based on AlGaAs Bragg reflection waveguides (QuoAlA)”.

The focus of “QuoAlA” is on fundamental research of AlGaAs-based photon sources and their epitaxial fabrication. The aim is to generate photon pairs with a high quality of entanglement at an exactly defined wavelength. The target wavelength is 1550 nm, which is within the telecom range (1500-1600 nm). The semiconductor material AlGaAs is a promising material for photon pair sources for several reasons. For example, it has nonlinear properties. In a material with nonlinear properties, a photon can spontaneously split into two photons at high light intensity due to an optical effect. Such light particle pairs can be quantum mechanically entangled.

Furthermore, AlGaAs Bragg reflection waveguides allow the integration of other optical and electronic components on chip level. “A unique feature of the technology used in the project “QuoAlA” is the potential to integrate a pump laser diode. This makes a particularly compact design possible,” emphasizes Dr. Passow. By reducing the size, weight and power of the components, an essential requirement for the realization of practical applications would be met.

The AlGaAs waveguide structures in the project benefit from the decades of experience of Fraunhofer IAF in the epitaxy of high-quality GaAs-based heterostructures as well as in process technology for the realization of waveguide structures in various III-V semiconductor materials. In addition, the scientists are using software for the optical simulation of Bragg reflection waveguides that they previously developed in the project “NESSiE”.

The project “QuoAlA” is funded by the Federal Ministry of Education and Research within the framework program of the Federal Government “Quantum technologies—from basic research to market” as “WiVoPro” (Scientific Preliminary Project) (FKZ: 13N15480). The aim of these preliminary projects is to study scientific issues with regard to future industrial applications in photonics and quantum technology. They are intended to complement existing research funding and build a bridge between basic research and industry-led collaborative funding. 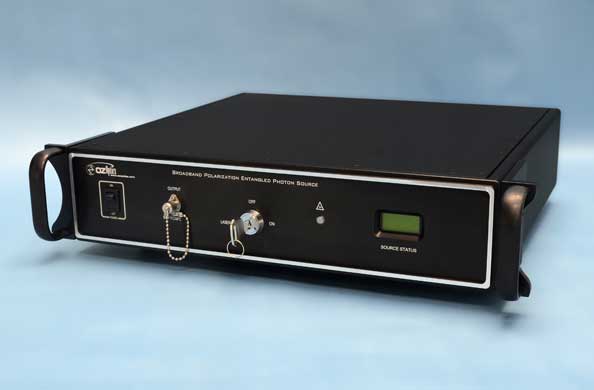 @Rajesh Uppal@idstch
Previous New Physical and behavioral Biometrics technologies with increased accuracy and security being developed
Next Worldwide Race to 4th industrial revolution, Industry 4.0 between Germany, US , Japan, China and India, China extends it to aerospace and defence