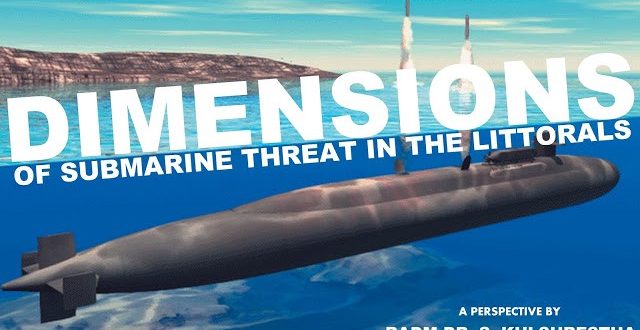 For military, Sonars are the eyes and ears of ships or submarines in water used to detect, locate and identify objects in water. They are used for underwater navigation, especially by submarines and surveillance.  Sonar systems can also be used to realign inertial navigation systems by identifying known ocean floor features.

Improvements in sonar performance are driven by the increasing need for naval forces to operate in the harsh acoustic environment of littoral waters, and by the emergence of new generations of near-silent submarines. This shift in operating conditions calls for modular acoustic systems with very high levels of performance in order to provide submarines with the capabilities they need to perform their missions effectively and safely.

Yet another sonar improvement being investigated would apply to shallow waters that are often noisy. By studying those waters at different times of year and understanding how sound ricochets through them, improvements can be made in how an actual signal of a specific vessel might be better separated from the noise.

Now militaries are employing Artificial Intelligence to improve the performance of Sonars. The general definition of AI is the capability of a computer system to perform tasks that normally require human intelligence, such as visual perception, speech recognition and decision-making. Machine Learning (ML) is a subfield of Artificial Intelligence which attempts to endow computers with the capacity of learning from data, so that explicit programming is not necessary to perform a task. One of the most successful machine learning algorithms is deep learning (DL) that allow high-level abstraction from the data, and this is helpful for automatic features extraction and for pattern analysis/classification.

Scientists from China and the United States have developed a new artificial intelligence-based system that they say will make it easier to detect submarines in uncharted waters. The technology builds on earlier work by the team, led by Dr Niu Haiqiang from the Institute of Acoustics at the Chinese Academy of Sciences in Beijing, which saw them develop a deep-learning algorithm that could improve the speed and precision of detection. The algorithm, however, needs a large amount of data to work, so its use is limited to waters that have already been fully charted. In contrast, the upgrade works in all waters, charted or otherwise.

Some experts have speculated that Submarines might be obsolete by the middle of the century. It’s possible that advances in artificial intelligence (AI), detection systems and signal processing, combined with swarming autonomous unmanned systems, could make it effectively impossible for submarines to maintain their stealth.

Niu and his colleagues, who included scientists from the Scripps Institution of Oceanography at the University of California San Diego, started by developing a simulator to generate a wide range of virtual environments from which the algorithm was able to learn. Once it had assimilated that information, the simulator was able to analyse real-life data taken from the world’s oceans and seas, the team said in a paper published in the July issue of The Journal of the Acoustical Society of America.

It is now able to help a single hydrophone locate more than 80 per cent of underwater targets within an uncharted area with a margin of error of less than 10 metres (33 feet), the paper said.

The researchers said the new technology should allow them to track any sound-emitting source – be it a nuclear submarine, a whale or even an emergency beeper from a crashed aircraft – using a simple listening device mounted on a buoy, underwater drone or ship. The scientists worked together to improve the sensitivity and accuracy of passive underwater surveillance technology, according to the academy’s website.

Professor Zhang Renhe, a researcher at the Institute of Acoustics who was not involved in the study, said the latest development was encouraging. “AI can be a useful assistant to underwater target recognition,” he said. “In a way it is similar to the speech recognition technology on our mobile phones.”

But he said scientists were still wrestling with exactly how the technology worked. “It is like a black box with some inner workings that are still unexplained,” he said. Researchers were now working on ways to combine the new AI technology with the physical models for underwater target detection that have been developed in recent decades, Zhang said. “This is a new frontier for fundamental science,” he said. “It requires international cooperation.”

Coda Octopus Group, , a global leader in real-time 3D sonar technology and real-time subsea intelligence, announced the launch of its newest breakthrough technology, an artificial intelligence-based Automatic Object Detection (AOD) software product series which presents an opportunity to extend its customer base. CODA’s AOD allows users to automatically detect and recognize distinct subsea objects, such as boulders or mine-like objects (MLOs). The technology provides significant cost savings and reduces the time required for subsea operations both within the commercial and defense space.

CODA’s initial product in its AOD series is the Survey Engine Automatic Object Detection Package (SEADP), based on algorithms designed and developed around Artificial Intelligence (AI) techniques. The SEADP enables geophysicists to automatically accomplish a previously manual, painstaking and costly task. After geophysical users collect data at sea, they then spend many labor hours going through this data manually to identify, tag and report on boulders within the seabed site.

“Our SEADP has been in trial with two significant customers who have reported significant productivity gains by using the SEADP. In one such trial, the SEADP package accurately recorded 4,600 boulder contacts in 3km of line data within nine minutes, and produced the contact report detailing the ping number, boulder position, and boulder size within 50 minutes. This level of data would typically have taken about three days, including preparing reports,” continued Ms. Gayle.

Annmarie Gayle, CODA’s Chairman and CEO, commented: “The subsea market is evolving and seeking technology that can increase productivity gains, thus reducing costs of its operations. This is exactly what our new artificial intelligence-based technology allows our customers to achieve. We are very excited to have accomplished this breakthrough AI technology, which based on early customer trials is set to revolutionize the workflow process for many subsea operators.

There has been an exponential growth of space objects, including orbital debris that has increased …