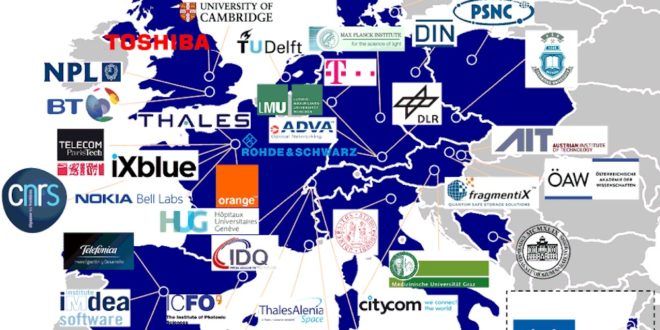 The race to conquer the quantum domain is among the most fiercely competitive in today’s world of technology. “Quantum technologies will lead to major advances in precision timing, sensors and computation, destined to have a major impact on the finance, defence, aerospace, energy, infrastructure and telecommunications sectors.” The UK  Government Office for Science has said that in the long term, quantum technologies could be comparable in size to the consumer electronics sector, currently worth an estimated £240bn a year globally. By 2024, the estimated global market for quantum technologies will reach $10.7 billion, which explains why nations, corporates and startups alike are all jockeying for first position.

One important quantum technology is Quantum key distribution (QKD), that establishes highly secure keys between distant parties by using single photons to transmit each bit of the key.   Quantum cryptography is unbreakable by any means — even with a quantum computer. QKD is suitable for use in any key distribution application that has high security requirements including financial transactions, electoral communications, law enforcement, government, and military applications.

In June 2019, several EU countries signed a declaration agreeing to explore together how to develop and deploy a quantum communication infrastructure (QCI) across the EU within the next ten years. Since then, three other Member States have also signed the declaration.

Europe’s economic activities and Europe’s single market is dependent on well-functioning underlying digital infrastructures, services and data integrity, not the least for critical infrastructures like energy, transport, health, finance, etc. Current security of the digital infrastructures and services will soon be under threat of no longer providing long-term security. Confidentiality of data and communications, authentication, as well as the long-term integrity of stored data have to be guaranteed, even in the advent of quantum computers. Introducing Quantum Key Distribution (QKD) in the underlying infrastructure has the potential to maintain end-to-end security in the long-term.

European Commission  Launched OpenQKD project in September 2019, is providing government-industry collaboration among 38 different companies and research organizations with the goal of establishing a quantum communication infrastructure in several European countries.

The European Commission chose to fund OPENQKD following a Horizon 2020 call for proposals in 2018. Its mission is to develop an experimental testbed based on QKD and to test the existing equipment supplied by different manufacturers of quantum components. OPENQKD’s activities will take place across Europe (in Austria, Spain, Poland, Germany, Netherlands, Switzerland, France, Italy, UK, Greece and the Czech Republic).

The OPENQKD aims to increase  critical applications’ security in various areas, especially in the telecommunications sector to secure data traffic in transit and at rest. In addition, it will address the development of a European ecosystem for quantum technology providers, and application developers. It will also work to identify new use-cases by supporting start-ups and SMEs, as well as offering modern test facilities to new quantum stakeholders. A further objective for the project is to devise standards and security certifications for this infrastructure.

This ultra-secure network would help member states secure their critical infrastructure and assets – from smart energy grids and healthcare facilities to government communications and banking transactions – against the cybersecurity threats posed both today and in the post-quantum era. It will integrate conventional and quantum communication infrastructure in order to protect data both at rest and in motion.

To achieve its ambitious goals, the OPENQKD project will last three years and have a budget of €15 million. Its consortium consists of 38 partners from 13 EU Member States and Horizon 2020 Associated States. The consortium partners cover a wide range of competences including quantum equipment manufacturers, network operators, system integrators, small and medium-sized enterprises, research and technology organisations, universities, certification and standardisation bodies and end users.

AIT (Austrian Institute of Technology) consortium, chosen by the European Commission to conduct its OPENQKD project, the forerunner to a major European quantum communication infrastructure. Its primary objective is to drastically strengthen security for critical applications in telecommunications, finance, healthcare, transmission of secure control signals in the electricity grid and public services. In a subsequent phase, it will support the networking of quantum computers, which heralds a new type of Internet.

This ultra-secure network would help member states secure their critical infrastructure and assets – from smart energy grids and healthcare facilities to government communications and banking transactions – against the cybersecurity threats posed both today and in the post-quantum era. It will integrate conventional and quantum communication infrastructure in order to protect data both at rest and in motion.

OPENQKD aims to change the way we perceive, understand and use quantum communication. Its main goal is to create and test European components of communication networks that include quantum devices, to implement applications such as quantum cryptography (Quantum Key Distribution, QKD). The keys generated by QKD provide ultra-secure encryption to transmit data with a very high level of confidentiality.

The infrastructure itself will leverage existing fibre communication networks to link sites nationally and across borders, while satellite communication will be used for long-distance communication across the EU and beyond.

Alongside securing critical assets and infrastructure, the quantum communication infrastructure will eventually become the backbone of Europe’s quantum internet – a topic we covered last year when scientists were setting out their vision of it. The EU Commission explain that this infrastructure will set about “connecting quantum computers, simulators and sensors via quantum networks to distribute information and resources securely all over Europe”.

Roberto Viola, Director-General of the European Commission’s Directorate-General for Communications Networks, Content and Technology, said:  This project will make a key contribution to ensuring that Europe remains at the forefront of research into quantum technologies and their applications which, among many other uses, have the potential to transform the way that we communicate securely. The EU has already shown that it is serious about quantum by launching in 2018 the Quantum Technologies Flagship, a €1 billion initiative that will fund cutting-edge research over the next ten years.

Helmut Leopold, Head of the Center for Digital Safety and Security at the Austrian Institute of Technology, which is coordinating the project, added:  With the European OPENQKD initiative, Europe builds on its leadership in science and technology in the sector of quantum technologies by fostering a strong cooperation among research and industry as well as the public sector. This will enable an innovative eco-system for creating a new perspective for our secure digital Europe and building the foundation for next generation communication technologies.

While hosting a tour of the quantum physics and computing research labs at the University of Paris-Saclay, Thales Chief Technology Officer (CTO) Marko Erman discussed what needs to happen for aerospace and other technological sectors to reap the potential benefits of quantum computing in the future.

“You will see in 20 years, it will just be a new application that will invade your work,” Erman said. Thales isn’t the only major aerospace and defense company with an interest in the future disruptive potential of quantum computing either in Europe.

Airbus for example, has dedicated an entire section of its website to information about the future potential of quantum technologies. The French airplane maker specifically believes quantum sensors could improve the use of acceleration measurements to provide aircraft navigation systems with more accurate positioning data. In 2018, the company established a quantum technology application center in Newport, Wales, and also closed out its first-ever quantum computing challenge for aerospace start ups in October.

Prior to opening their 2019 InnovDays event in Paris La Defense, Thales announced it would be formally joining the OpenQKD project. While the ultimate goal of the project is to establish networking infrastructure and a new type of Internet for quantum computers, the research Thales is already involved in holds the potential for the use of quantum computing in aerospace.

Thales is making two main contributions to this project, one on land, the other in space. The former entails providing encryption equipment compatible with QKD for terrestrial networks, with the aim of creating a European center of expertise in this area. Secondly, Thales will define the space segment of a quantum communication network, because these types of networks will need satellites to provide coverage across entire countries or continents.

Thales has been an active participant in quantum technology research for several years already. For instance, Thales research centers are working on subjects ranging from quantum sensors and quantum measurement instruments, to quantum communication as well as various building blocks of quantum computers

As an example, in the super conductivity lab, Thales engineers are researching the development of a quantum antenna that is smaller than a finger tip. Using the quantum phenomena known as the Josephson effect, the antenna will be sensitive to the magnetic field component of radio waves and that allows the design to be much smaller. In contrast, classic antennas need to be larger, because they function based on fielding the electric field of a radio wave and need to have an aperture size capable of dealing with the larger size of the wave length.

Thales researchers leading quantum antenna development noted that the design they’re developing is currently only capable of receiving, but not transmitting signals. In other sections of the university, Thales engineers are collaborating with academic researchers to understand how cold atoms, flawed diamonds and superconductors among other unexploited properties of matter can provide the type of materials to replace reliance on transistors and support future quantum computing concepts.

“Quantum sensors have the potential to impact aerospace, defense and security and a host of other segments,” Erman said. “Why? All of these segments need actually to understand the world that is around them. Either positioning, timing, imagery, radio frequencies, you name it. What is unique with the quantum sensor is that they actually improve the performances, sometimes the time or bandwidth of a sensor application for example, not by 50 percent or a factor of 2, they improve it by orders of magnitude, like 100, or 1,000 or 10,000 times.”

Moving forward, Thales will look to lead development of the space segment for the quantum communication network that Europe is seeking to establish as part of the OpenQKD project. Erman believes in order for quantum computing to move from research lab concepts to industrial reality, more investment and recruiting of experts in the field will be required. “Which will come first? Some of the sensors, the antennas, the spectrum analyzers, these are some of the technologies that are the most mature that we have exposed to the press, and the rest will follow,” Erman said.