Over the past decade, the proliferation of fiber optic sensors and sensing systems has been ever-increasing, especially the use of fiber Bragg grating (FBG) based sensors. The fiber optic sensors also called as optical fiber sensors use optical fiber or sensing element.  These Sensors can measure a large variety of parameters, such as temperature, pressure, strain, refractive index, vibrations, displacements, bending, loading, and liquid level or concentration of chemical species.

Fiber optic sensors are supreme for insensitive conditions, including noise, high vibration, extreme heat, wet and unstable environments.  The optical fiber sensors have advantages like immunity to electromagnetic interference, lightweight, small size, high sensitivity, large bandwidth, and ease in implementing multiplexed or distributed sensors. The fiber optic sensor allow for detection in tight spaces or where a small profile is beneficial. They are resistant to high temperatures and an explosive environment. No possibility of spark, so are safe to be used in hazardous sensing environments, such as oil refineries, grain bins, mining operations, pharmaceutical manufacturing and chemical processing.

Fiber Bragg grating (FBG) sensors are becoming more popular each year because fiber optic applications are spreading in different aspects of life and science. Some of them are security, transportation, civil engineering, medical, and etc. Despite the diverse application space, the market driver for fiber Bragg grating sensors has been monitoring smart structures like bridges, dams, and pipelines. FBG sensors also have had an impact on the aerospace industry by controlling the temperature, vibration, strain, and other data in real-time.

There are a lot of fiber optic applications in the oil and gas industry. Fiber Bragg grating technology, fiber optic monitoring systems, and distributed temperature sensing are commonly applied for in-well temperature monitoring and exploration activities. Distributed fiber optic sensors are also widespread in the wind power industry. They are used for the measurement of stress and strain in turbine blades.

In medicine, the ability to perform all the fiber optic solutions’ benefits is very useful for operations and certain medical procedures. Fibers can be inserted in hypodermic needles or catheters. That allows for more precise positioning of the fiber optic sensors. Moreover, fiber Bragg grating sensors are applied for temperature profiling near patients’ internal organs. And finally, FBG sensors are produced for endoscopic/colonoscopic pressure profiling. Fiber optic technology has an impact on chemical and biochemical sensing. There are bioassays based on fiber Bragg gratings as the sensing element for protein or DNA interactions. Nowadays, because of the development of fiber optic solutions, new fiber Bragg gratings were created. They are able to cope with high temperatures and harsh environments. It is highly useful and even crucial in power plants and for combustion and jet engines.

Today FBG sensors are becoming irreplaceable tools in different fields because of their simplicity in comparison with other technologies and advantages that they provide. And according to the tendency, fiber Bragg grating sensors will continue to apply in many existing and emerging applications.

As its name suggests, the accelerometer sensor can be used to measure the acceleration exerted upon the sensor. Nowadays, there is a wide variety of accelerometers, such as: mechanical, micromechanical, piezoelectric, piezo-resistive, capacitive, heated gas, Hall effect, fiber Bragg grating (FBG) based, among others.

Traditional accelerometers are either piezoelectric, piezoresistive, or capacitive-based sensors that measure the motion of a structure via the current induced by the inertia forces acting on the material. The response of these sensors is typically processed by a signal amplifier and converted to a voltage change for detection and acquisition. This technology has proven useful in many applications. In recent years, the development of fiber optic-based sensors has seen fiber optic sensors for the measurement of strain, temperature, and pressure that have performance characteristics meeting and/or exceeding those of traditional sensors.

The development of fiber optic accelerometers and their use in existing markets has been slow to materialize due to the general unfamiliarity of fiber optic sensors in these markets. Applications with severe operating environments, such as oil and gas drilling, where the advantages of fiber optics sensors allow them to function, where traditional sensors cannot have been the only areas to see marginal use of these devices.

Nowadays train accidents often cause severe injuries and even cases of death. Nevertheless, researchers from China have designed new fiber optic sensors that allow measuring acceleration and vibration characteristics on trains. Additionally, this optical fiber technology can be used in a combination with artificial intelligence in order to prevent potential railway accidents and catastrophic train derailments.

To be more precise, the FBG accelerometers are able to monitor problems in the railway track or the train in real-time to detect defects before an accident happens. Such fiber optic devices identify frequencies more than double that of conventional optical fiber accelerometers, making them ideal for monitoring wheel-rail interactions.

The principle of durable FBG sensors’ operation is based on the use of no moving parts, herein, the fiber accelerometers demonstrate good operation in the noisy as well as in high-voltage environmental conditions found in the railway field of application. Moreover, the researchers confirm that their novel FBG accelerometers can be applied in other vibration monitoring applications. For example, fiber optic applications include structural health monitoring for buildings and bridges and vibration measurements of aircraft wings.

The developed FBG accelerometers demonstrate the following benefits that include:

Finally, the researchers have developed totally new FBG accelerometer based on a specific optical fiber (a polarization-maintaining photonic crystal fiber). It has been tested by installing the optical fiber device on an in-service train. Thus, the FBG accelerometer demonstrates a similar operation to the piezoelectric accelerometer, but it does not require expensive shielded fiber cables to take the effects of electromagnetic interference down.

Due to the great damage caused by the last seismic event in the highly populated Mexico City (September 19th, 2017), it is very important to have an accurate monitoring system in order to reduce casualties and building damages. A monitoring system makes easier to predict the earthquakes, design new buildings models to watch the response against these kinds of events and improve them

Since the discovery of the photosensitive effect in optical fiber, by which UV light can be used to induce a permanent change in the refractive index of optical fiber, researchers have been discovering new applications for this unique optical phenomenon. Fiber Bragg Gratings are a type of reflective structure constructed in a part of an optical fiber with a periodic variation in the refractive index of the fiber core along the longitudinal direction (approx. 10nm) of the fiber. When light passes through the FBG, only the light of a particular wavelength is reflected. Spectrum center wavelength of reflected light is called Bragg’s wavelength. 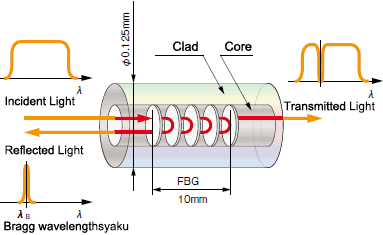 In order for an FBG sensor to function as an accelerometer, the acceleration must be coupled to a mechanical load on the FBG. The resulting wavelength shift is then calibrated to the level of acceleration. One can envision multiple schemes to construct such a device, and multiple vendors are offering these types of sensors as commercial products.

The improvement of the sensitivity of an accelerometer can be obtained by using a heavier inertial object. However, this method will reduce the resonant frequency. By contrast, the improvement of the resonant frequency of an accelerometer can be obtained by shortening the vibration arm, without reducing the sensitivity. Therefore, it is optimum for the vibration arm to be as short as possible, provided that its inertial object is adequately heavy.

Fiber Bragg grating (FBG) has many intrinsic advantages, such as immunity to electromagnetic interference, electrical isolation, frequency modulation, and ease of multiplexing. Many different FBG accelerometers have been developed. . Some FBG accelerometers used a springy stick to hold the inertial object at the equilibrium, and the FBG was attached to the springy stick. When the inertial object vibrated, the springy stick and FBG was pulled. Some used optical fiber containing Bragg grating as the vibration arm, and usually showed a higher sensitivity and smaller size than other types.

The sensing technology market has a rapid growth in the last few decades. Most of all, this is explained by the main advantages like small size, environmental and electrical immunity, and distribution capabilities. The new units of FBG sensors and fiber optic cables are valuable instruments for monitoring industrial processes and infrastructure. That’s why fiber Bragg grating (FBG) sensors are applied in many different spheres.

Some of the key applications as follow: Low Frequency Monitoring, Small Amplitude Acceleration