Armor is a protective covering that is used to prevent damage from being inflicted to an object, individual or vehicle by direct contact weapons or projectiles, usually during combat, or from damage caused by a potentially dangerous environment or activity (e.g., construction sites, cycling, etc.). Personal armor is used to protect war animals and soldiers. Vehicle armor is used on armored fighting vehicles and warships. Rising security concerns in developing countries are driving the armor materials market. However, some government regulations may hamper market growth.

Armor material plays a significant role in the protection of an individual since it absorbs the impact of physical attack. The wearing of body armour  provide troops an unparalleled advantage on the battlefield, improving survivability and reducing casualities. It has also been very effective in reducing injuries and fatalities within the police force and correctional services.

The material that is used for the manufacturing of various armors including vest, helmet, vehicle, and others are heat resistance, lightweight, and flexibility. Furthermore, armors are used in various applications such as aerospace armor, body armor, vehicle armor, marine armor and many more. The government investment for improving defense and security with the help of advance technology owing to the growing incidences of terrorism across the globe is driving the adoption of more advanced materials in the manufacturing of armor.

The global armor materials industry was pegged at $10.6 billion in 2019, and is expected to reach $15.7 billion by 2027, growing at a CAGR of 5.3% from 2020 to 2027. The global ballistic protection market size is projected to grow from USD 12.6 billion in 2020 to USD 17.2 billion by 2025, at a CAGR of 6.4%. Increasing geopolitical tension is emerging economies, and massive spending on defense owing to internal conflicts & tensions in developing countries, such as Brazil, India, and Russia are expected to drive the ballistic protection industry growth. 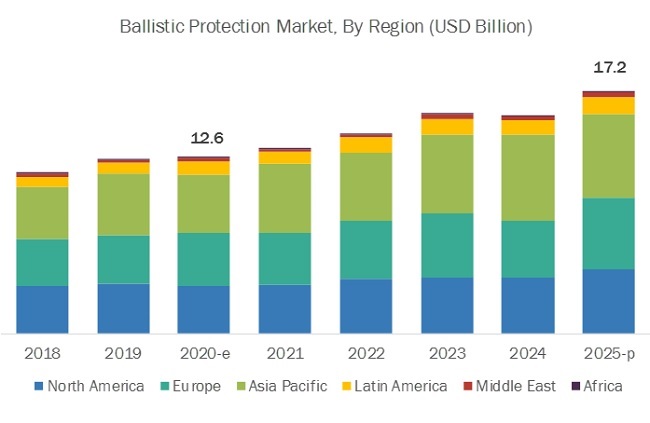 Researchers are engaged in development  on better materials that could dramatically decrease weight while maintaining or increasing the level of protection  as well as improve levels of comfort and fit. Because reduced weight would lighten the soldier’s load and increase performance, soldier survivability as a whole could improve significantly. Cost reduction is also a commercial driver, especially when standard body armour systems can be priced as high as several thousand dollars per set. Each of these challenging requirements are being met through development of new materials, innovative designs and lighter weight systems.

Meanwhile, soft body armor is forecasted to increase in sales, as the technology is highly preferred in the private sector among security companies and police departments. The push for more advanced lightweight body armor by these customers will help propel the expansion of the market, the report said. “Technological innovations and modernization initiatives [will] prompt security agencies and military forces to opt for the latest equipment,” the study said.

Some of the prominent trends that the market is witnessing include development of advanced weapons and ammunition, rising security concerns in the emerging economies, soaring demand for lightweight protection solutions and growth opportunities/investment opportunities.

The rising security concerns in emerging economies and the growing investment in the security system and defense is likely to boost the demand for the body armor. Furthermore, the growing demand for the vehicle, aircraft, and marine protection coupled with the rise in the spending on improving vehicle performance and aircraft security is a major factor that is fueling the growth of the market over the forecast period.

Moreover, the increasing threats of terrorist attacks owing to the rising political instability are escalating the need for an effective solution for improved security systems. This, in turn, is anticipated to propel the growth of the market over the forecast period.

Manufacturing activities have been halted due to lockdown imposed in many countries. However, as lockdown restrictions eased off, manufacturers have started their plants with limited workforce. The disrupted supply chain due to lockdown hindered the supply of raw materials. Moreover, the ban on import-export activities restricted movement of goods from other countries.

However, the high production cost is a major factor that is likely to hinder the growth of the market.  The  high cost associated and limited application scope of multi-layered composite materials hinder the market growth. On the other hand, advancements in armor materials plates create new opportunities in the coming years.

Strength to weight ratio of armor materials plays vital role in the manufacturing of end products. With several stages of development in the armor material since inception the market is further projected to witness huge opportunity over the forecast period. The market is projected to reach more than USD 16 billion by the end of 2028.

In terms of material type, the global armor material market is segmented into metals & alloys, ceramics & composites, para-aramid fiber, ultra-high-molecular-weight polyethylene, fiberglass and others. Metals & alloys holds the lion share followed by ceramics and composites. The metal & alloys segment emerged as the leader in the global armor materials market with a revenue of USD 3.22 billion in 2019. This was because metals such as high-density steel, titanium and aluminum, along with their alloys, are used as armor materials for the aerospace, vehicle and marine armor systems. By material type, the composites segment to register the highest CAGR 6.7% during the forecast period, owing to growing preference of composite materials in mobile military equipment, such as tanks and large ships.

The application segment includes vehicle armor, aerospace armor, body armor, civil armor and marine armor.  Body armor consists of various sections. In the lowest point, a jacket may have two panels that are worn over the front and back of the jacket itself. Such panels are what shield the wearer, the jacket is literally, a regular jacket without them added.

By application, the vehicles segment held the largest share in 2019, contributing to around two-fifths of the global armor material market, owing to growing application of lightweight aluminum alloys in military vehicles such as personnel carriers.

The body armor segment is anticipated to grow at the highest CAGR of around 7.5% over the forecast period because of the increasing security concerns in the emerging economies and to provide protection to law enforcement and military personnel. The rapid development of weapons and ammunition is also a driving factor boosting the growth of the body armor segment  along with increase in application for Kevlar fabrics and Dyneema fabrics in armor vests.

By platform, the airborne segment is projected to grow at a higher CAGR during the forecast period. It includes fixed-wing aircraft & helicopters and unmanned aerial vehicles (UAV). There is an increasing demand for aircraft across various aviation platforms for military purposes. This demand is attributed to the rising military expenditure of multiple countries, such as China, Japan, South Korea, and the US. The UAV segment is expected to witness the highest CAGR for the forecast period, 2020-2025. The growth of the airborne segment is attributed mainly because of the changes in the dynamics of war, leading to the introduction of UAVs on the battlefield.

By region, the market across North America held the largest share in 2019, accounting for more than half of the market, owing to the increasing demand for homeland security applications and development of advanced armor materials and systems for vehicles and aerospace. However, the global armor material market across Asia-Pacific is expected to manifest the highest CAGR of 6.8% during the forecast period, due to increasing warfare activities.

North America dominated this market owing to early adoption of technology and strong military needs. However, with the passing time the market is projected to reach the stage of maturity providing other regions with growth opportunity. Asia Pacific is projected to witness strongest growth owing to presence of key developing economies such as India and China.

The ballistic protection market in Asia Pacific is anticipated to grow at the highest CAGR from 2020 to 2025. Asia Pacific is an emerging market for ballistic protection systems, owing to the economic growth of countries in this region and increased defense spending in countries such as India, China, Japan, South Korea, and Australia. The governments of these countries and local industries are also signing up with the contractors and supporting them through the procurement process by providing necessary financial and infrastructure aids. The increase in the number of insurgent groups entering the territories and using deadly explosives such as IEDs and bombs has further raised the need for ballistic protection systems.

In March 2020, BAE Systems was awarded a USD 339 million contract modification by the US Army for the production of 48 vehicle sets of the M109A7 Self-propelled Howitzer (SPH) and its companion, the M992A3 Carrier, Ammunition, Tracked (CAT) vehicle. This contract also includes post-delivery support and spare parts.

In December 2019, BAE Systems was awarded a USD 249 million contract modification by the US Army to complete an additional 60 M109A7 Self-propelled Howitzers that will bring improved artillery capabilities to the Army’s Armored Brigade Combat Teams.

In December 2019, Rheinmetall AG was awarded a contract by the Royal Netherlands Armed Forces for the second phase modernization of their fleet of Bergepanzer 3-Büffel/Buffalo armored recovery vehicles.

In October 2019, BAE Systems received a USD 120 million contract from the US Marine Corps for additional Amphibious Combat Vehicles under the third order for Low Rate Initial Production (LRIP).

In aerospace applications, materials with high strength to weight ratios along with properties such as …