High-performance, Hybrid and controllable solid rocket motors being developed for the next generation of long range missiles and launch vehicles

The function of the propulsion system is to produce thrust, which is the force that moves a rocket through air and space. Different propulsion systems generate thrust in different ways, but always through some application of Newton’s third law of motion. In any propulsion system, a working fluid is accelerated and the reaction to this acceleration produces a force on the system. A general derivation of the thrust equation shows that the amount of thrust generated depends on the mass flow through the engine and the exit velocity of the gas. The propulsion system of a rocket includes all the parts that make up the rocket engine: tanks, pumps, propellants, power head, and rocket nozzles.

Technological advances in propulsion are steadily reducing costs and improving efficiency, reliability and safety, in order to keep up with satellite demand and maintain the competitiveness in space. Constant environmental concerns result to an increasing need for non-toxic propellants that do not harm life on the ground or in the atmosphere.

In a solid rocket fuel grain, all the components required for vigorous combustion are mixed together and packed into a solid cylinder, into one substance. Once the combustion starts, it proceeds until all the propellant is exhausted. There will be an oxidizer (usually a salt such as ammonium perchlorate or potassium nitrate), a fuel (HTPB – Hydroxyl Terminated Polybutadiene) or some other solid hydrocarbon and an accelerant (sulphur, powdered aluminium, or other easily oxidized metal). When lit, the fuel grain will burn energetically, releasing a large volume of hot gases that are used to provide thrust.

In Liquid fuel propulsion, propellant is comprised of two composites: fuel and oxidizer. They are stored separately in tanks in liquid phase and are pumped into the nozzle combustion chamber where burning occurs. Engine can stop the combustion and the thrust by turning off propellant flow. Liquid rockets tend to be heavier and more complex because of the pumps and storage tanks.

Solid rockets inherently have fewer working parts, which typically relates to lower risks and costs. Storage life of solid propulsion systems is also greater than that of liquid systems, in that they do not require regular maintenance. The disadvantage of standard solid propulsion has been the inability to be “throttled”, thus the initiative to enhance controllable solid rocket propulsion technologies. Another advantage of variable thrust is the ability it provides for altitude compensation for the exit cone and optimum expansion at all boost and sustain thrust modes.

Hybrid propulsion systems,  are hybrids or a cross between other types of rocket motor, in particular, liquid fueled rockets and solid fuel rockets. They were conceived to overcome the complexities of liquid bi-propellant engines and the lack of controllability of solid rocket motors.

Controllable solid rocket motors combine the simplicity of solid rockets and the thrust variation ability of the liquid and hybrid engines. Variable solid rocket thrust propulsion technology has been explored by government and industry since the end of the 20th century to find a solution to the propulsion requirements for the next generation of missiles and launch vehicles. 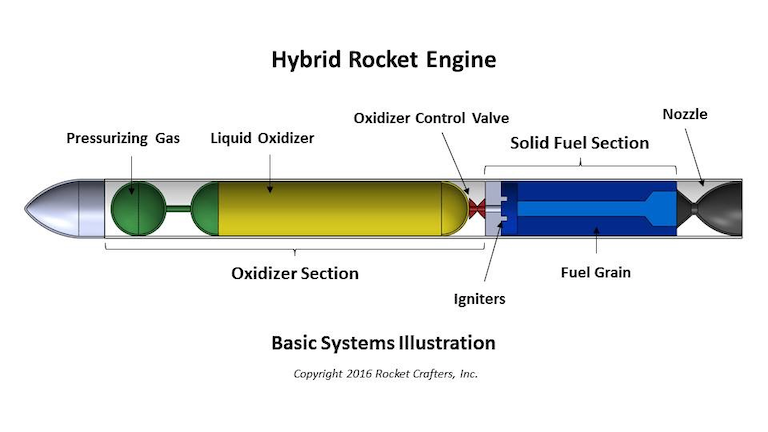 Aerospace engineering company Valley Tech Systems has developed a thruster technology that was evaluated in a hot-fire test at the company test facility in Lovelock, Nevada, US. During testing, the controllable solid-propulsion thruster design prototype successfully achieved the longest-duration-to-date operation. The technology has been developed under an Air Force Research Laboratory (AFRL) programme to support wider use of solid propellant thrusters for missile and space launch systems.

Raytheon Missile Systems has developed and tested on/off/restart solid propellant thrusters which are controlled only by electrical current. This new patented class of energetic rocket propellant is safe, controllable and simple. The range of applications for this game changing technology includes attitude control systems and a safe alternative to higher impulse space satellite thrusters.

Aerojet Rocketdyne, Inc., has recently achieved a milestone by completing a successful hot-fire test of a controllable solid rocket motor under the U.S. Air Force Demonstration and Validation Post Boost Study A program.

Vice President of Defense Advanced Programs Tyler Evans said this program allowed us to evaluate various advanced technology propulsion systems and select one of the most promising – a controllable solid rocket motor system for hardware demonstration testing. He continued that maturing this critical technology now will undoubtedly pay future dividends as the nation looks to modernize its strategic deterrent capabilities in the coming years.

Valley Tech Systems, Inc. has developed a new thruster technology under an Air Force Research Laboratory (AFRL) program. Valley Tech Systems has validated the controllable solid-propulsion thruster design in a hot-fire test at the company’s test facility in Lovelock, Nev. A prototype successfully performed continuously for hundreds of seconds – the longest firing ever of a system of this type.

AFRL funded development of the long-duration controllable solid-propulsion thruster technology through its Small Business Innovation Research program for the development of advanced technologies for post boost propulsion systems, which steer and orient payloads after they are launched into space. The technology also can be applied to booster reaction control systems for the launch of small satellites.

In the Army’s second Expeditionary Technology Search, or xTechSearch 2.0, competition in 2019, we were selected to conduct a proof-of-concept demonstration as one of 12 finalists out of an initial field of 170 entrants. For the demonstration, we developed a prototype and conducted a hot-fire test, which showed the relevance of our Active Nozzle Propulsion System design to Army needs and the efficacy of our technical approach. The results of the test are shown under “Successful Hot Fire Test with Flight Modeling.” We currently are pursuing opportunities for further development, testing and maturation of this application of our controllable solid propulsion technology.

Our active thruster nozzle design directly responds to the Army’s modernization priority for long-range precision fires that provide long-range and deep-strike capability critical to winning in a fight against a peer adversary. This capability is essential to enabling “multi-domain forces to penetrate and neutralize enemy A2/AD (anti-access/area denial) capabilities while ensuring military overmatch at every echelon,” as stated in the 2019 Army Modernization Strategy.

Because we have conceived of our active thruster nozzle design as a screw-in upgrade, it would be applicable to modernizing current weapon systems, as well as to future weapon systems. Our current system design could provide an upgrade capability for the Army’s 2.75-inch Advanced Precision Kill Weapon System (APKWS). Other potential upgrade applications for our active thruster nozzle technology include tactical air-to-air, air-to-surface, surface-to-air and surface-to-surface missiles and the strategic long-range cannon, as well as lower-tier missile defense. In addition, there are potential commercial applications for the technology in the mining and oil and gas industries.

Our active thruster nozzle is essentially a “smart” nozzle. Replacing an existing missile or artillery nozzle with our active thruster nozzle would result in a “smart” rocket motor from end to end. This design increases lethal range by increasing operation time through either continuous thrust throttling with options for extinguishable and reignitable operation. With flexible on-demand thrust amplitude capability, the design enables options for air-to-air, air-to-surface, surface-to-air and surface-to-surface engagements.

As an example, in an air-to-surface engagement where the ordnance needs to shoot over a hill to hit a distant target, the active thruster nozzle propulsion system would go through this sequence, which also is shown in the following illustrations. This sequence of high-level boost, low-level sustain and precision targeting manages the kinetic energy to extend the engagement range and improve targeting accuracy and lethality.

A: Non-Operation to Ordnance Initiation – to arm and launch
B: High-g Turn – to ensure clearance of obstacle
C: Boost – to achieve peak velocity for ascent
D: Sustain – to optimize flight and drag profile to increase range
E: Precision Thrust Vector Control – to precisely steer to the target
F: End-game Boost – to increase lethality

In August 2019, we successfully completed a single-axis hot-fire test of a 2.75” representative thruster nozzle prototype, which mitigated major risks and provided data to anchor performance benefits. This test brought the system to technology readiness level 4 (TRL-4) (component and/or breadboard validation in laboratory environment).

Here is a summary of the test results.

ESP formulations are based on high molecular weight (poly)vinyl alcohol, which swells and intermingles to create a tough plastisol solid when added to the ionic liquid oxidizer, hydroxylammonium nitrate stabilized with 5% ammonium nitrate (S-HAN5). The S-HAN-5 is conductive and exhibits pyroelectric behavior (generating heat when subjected to an electric current) in the propellant. This property contributes to the safety of the plastisol, which cannot be ignited by spark or flame (in marked contrast to most solid propellants).

ESP formulations are well-suited for long-term space applications and can be transported safely on the long duration trip to the Mars surface from Earth. They contain no volatile compounds and are manufactured using a water-based, solventless process, which allows them to be stored and operated in vacuum. ESPs are stable and safe to handle, and are classified by the Department of Transportation as Hazard Division 1.4 materials (minor fire or projection hazard). They can be classified as “green” propellants and are relatively non-toxic.

ESP formulations produce only carbon dioxide, nitrogen, and water as major combustion products.  As a result of these properties, ESPs are well-suited for use in a cartridge-loaded propellant system, in which propellant is cast into multiple cartridges and the cartridges are loaded into the motor as needed. This allows thrusters to be re-used multiple times simply by replacing spent propellant cartridges.

@Rajesh Uppal@idstch
Previous The future of commercial and military Data storage and Databases is Cloud platform with Data as a service (DaaS)
Next DOD recognizing data as a strategic asset has developed enterprise-wide data strategy to transform into a data-centric enterprise. 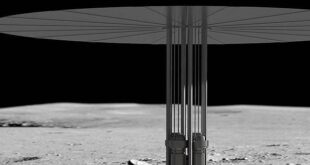