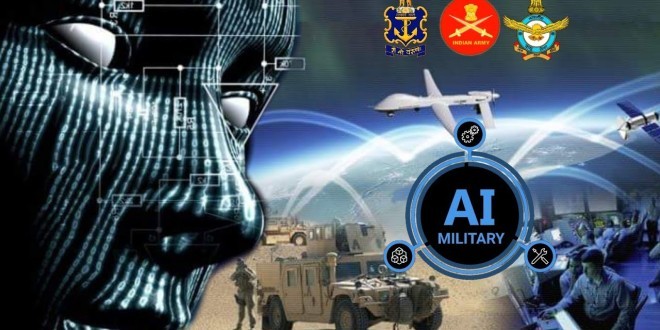 The promise of AI—including its ability to improve the speed and accuracy of everything from logistics and battlefield planning to human decision making—is driving militaries around the world to accelerate research and development. A new Harvard Kennedy School study concludes AI could revolutionize war as much as nuclear weapons have done. AI race has ensued between countries like US, China and Russia to take a lead in this strategic technology.

The US has been using using AI-based technologies in their defence for a long time. In 2014, former Secretary of Defence Chuck Hagel announced the “Third Offset Strategy” stating that rapid advances in artificial intelligence will define the next generation of warfare. Ever since then, there has been a substantial increment in the budget of AI-led projects under the defence budget.

According to one report, the US Defence Department will be setting aside $4 billion toward AI and ML-related R&D activities in fiscal 2020, which is a substantial jump from the 2019 fiscal spending. As part of the defence budget, the military is working on 222 AI R&D activities at a combined $1.6 billion. If you look at the entire US budget for 2020, it provides an enormous $134.1 billion for Federal R&D, including the conduct of R&D and investments in R&D facilities and equipment.

Though Russia lacks sufficient budgetary support and a lack of general infrastructure that supports AI research for defence purposes, It  is on its way to close the gap and started deploying artificial intelligence capabilities in the military.  Of the 388 scientific schools of the Russian Ministry of Defence, 279 are concentrated in military schools. Most of them are actively engaged in research in the field of artificial intelligence, robotics, military cybernetics and other promising areas. In 2017, Kalashnikov, the Russian defence manufacturer, announced that it had developed a range of robots that use AI to identify targets and make independent decisions.

China is also not far behind, In JULY 2017, CHINA’S government issued a sweeping new strategy with a striking aim: draw level with the US in artificial intelligence technology within three years, and become the world leader by 2030. China aims to dominate the next generation of “intelligentized” warfare, relying on “long-range, precise, smart, stealthy and unmanned weapons platforms.” According to a February 2019 report by Gregory C. Allen of the Center for a New American Security, “China’s leadership – including President Xi Jinping – believes that being at the forefront in AI technology is critical to the future of global military and economic power competition.”

China is advancing fast in many technologies like artificial intelligence, quantum, genetic engineering, 5-G broadband technology and the “Internet of Things.” This is of concern to India as the result of future battles will favour the one which has a technological edge over its adversary and Beijing is way ahead of India in this regard. Many futuristic technology areas are emerging in which there is very low level of technology readiness within the country and which are expected to have a strategic impact in future defence and security systems.

Chief General of Indian Army, Bipin Rawat  at the National Conference on ‘Self Reliance in Defence Manufacturing’ emphasized that it is high time to focus on incorporating Artificial Intelligence (AI) and big data into the Indian Armed Force’s system. He also stated that the nation’s northern rival, China was spending “huge money” on this technology.

Talking about the future, how tech will be part of the warfare, he also stated that in the future there will be a time when apart from guns and rifles, the nation will witness a lot of non-contact warfare and they are going to be fought in the cyberspace. It is high time to start understanding the relevance of AI and Big Data computing and how to incorporate this in into the defence system.

Artificial Intelligence is an emerging disruptive technology which has gained prominence and is affecting civil andmilitary domain across the globe. Indian Army  organised a seminar on Artificial Intelligence to bring together professionals in the field like defence, industry, academia Defence officers and experts to brainstorm the way ahead with an objective to identify and conceptualise AI technology for applications on platforms for the future battlefield. The main purpose of the seminar was to ascertain the gaps existing in the military technology and to find the way forward for equipping the Army to deal with the threats emanating in the neighbourhood.

The officials said the application of AI in the surveillance of India’s borders with China and Pakistan could significantly ease the pressure on armed forces personnel guarding the sensitive frontiers. China has been pouring in billions of dollars into AI research and machine learning.

Indian Military has also stepped up the use of AI in Military.  According to news reports, a multi-stakeholder task force on the strategic implementation of AI was set up which included members from the Government. The members included DRDO, Defence Public Sector Undertakings, National Cybersecurity Coordinator, ISRO and BARC. Recently, Union Defence Minister Rajnath Singh announced that 25 defence-specific AI products would be developed by 2024.

The Ministry of Defence (MoD) created a multi-stakeholder task force for Strategic Implementation of Artificial Intelligence and Defence in February 2018 which gave its report in June. Based on the recommendations of the report, it led to the adoption of the creation of the institutional framework for AI policy implementation with guidelines for the country’s defence forces. In February 2019, the ministry established a high-level Defence AI Council (DAIC) under the chairmanship of Minister of Defence assigned with the task of providing strategic direction towards the adoption of AI in defence.

In an ambitious defence project, the Indian government has started work on incorporating artificial intelligence (AI) to enhance the operational preparedness of the armed forces in a significant way that would include equipping them with unmanned tanks, vessels, aerial vehicles and robotic weaponry. The move is part of a broader policy initiative to prepare the Army, Navy and the Air Force for next generation warfare and comes amid rising Chinese investments in developing critical applications of AI for its military.

As per reports, DPSU has been directed to build AI-enabled products and AI-based tools for sensor data analysis, predictive maintenance and situational awareness. A INR 73.9 crore project has been sanctioned under CAIR to build AI-based solutions to improve intelligence collation and analysis capabilities of Indian defence. In a similar vein, another project called Energy Harvesting Based Infrared Sensor Network for Automated Human Intrusion Detection was sanctioned for about INR 1.8 crore.

Secretary-defence production Ajay Kumar  said a framework was being finalised under which industry and defence forces could work together to create a strong base for AI in defence systems. “We need to work on a partnership model which should be different from a buyer- seller proposition while fully leveraging capabilities of the industry,” he said, adding state-run Defence Research and Development Organisation (DRDO) would be a major player in the project.

The central government is promoting projects on AI. “Under the iDEX (Innovations for Defence Excellence) scheme of the Union Government, more than 600 applications were received. 44 were finally shortlisted out of which seven are on AI for which government is ready to give a financial support up to Rs 1.5 crore,” said Mudit Narain, representative of IDEX.

Artificial Intelligence (AI) to be applied in the Indian Navy

In modern naval warfare, surface warships encounter hostile threats from air, surface, underwater and shore.  “By fusing sensor data, the Fleet Units at sea form a more accurate and reliable view of its environment for an intelligent situational awareness. Sensor data fusion provides a complete and accurate picture of its surroundings. The techniques that surround multisensor data fusion make up a very complex topic. Data processing techniques that associate, aggregate and integrate data from different sources help the system to build knowledge about certain events and environments, which is not possible using individual sensors independently,” says Milind Kulshreshtha, C4I expert.

The data and algorithms used in predicting missile engagement range define a Weapon Engagement Zone (WEZ). The WEZ algorithms are contained within the missile’s fire control computer onboard the ship. These values are calculated continuously in real time during flight with respect to a tracked target while the missile is still on the launcher. The WEZ information is displayed to the Operator, allowing the Command to make informed decisions when launching a missile.

Kulshreshtha said that use of an Artificial Neural Network (ANN) to perform the function for WEZ computation can be achieved by recording practice missile firing data and using this to train a multi-layer ANN using a specialised algorithm like Bayesian.

However, there are multiple factors which may emerge as a hindrance in effective implementation of AI in the Indian Navy, beginning with lack of Data science talent internally to identify AI issues themselves! Mostly, the AI initiative for Navy has to emerge from within the organisation, rather than driven by external technology professionals. This is crucial since commercially available platforms are ‘data-scientist’ oriented solutions which Navy may find as undeveloped eco-system for enterprise-level exploitation, points out Kulshreshtha, who is behind several critical indigenous technologies for the Indian Navy.

According to him, the existing Tactical Data Link is an issue requiring a re-look to avoid it being a limitation for Naval Data servers connectivity with warships deployed at sea. Also, the role of manpower intensive work within firmly established Naval procedures is another complex issue to be overcome in the present machine age. Finally, the fears associated with AI becoming a self-learning monster too has limited reconnoitring opportunities due to lack of knowledge.

Army to incorporate AI on Battlefield

As part of its strategy to increase commitment to AI, the Indian military will soon use AI-enabled device for night vision. According to news reports, the Army Design Bureau has built a device that will warn soldiers of unusual activity across different terrains and in high altitude areas. A senior officer from the Indian military shared that AI-based night vision device will be helmet mounted and in addition to this, there will be a wristband attached to it, which vibrates when the device picks up on movement in the area.

News reports hint that the device was mooted during the ARTECH summit. In addition to the AI-enabled device for night vision, the soldiers also have access to live translator, that helps soldiers positioned along Line of Actual Control, China to interact with Chinese soldiers. The device translates Mandarin to Indian languages.

Indian Army Might Soon Predict Stone Pelters In J&K, Thanks To Technology By IIT Students

Indian Army has been struggling with stone pelters in Jammu & Kashmir for a long time now, and a group of students of the Indian Institute of Technology (IIT) – Madras have decided to do something about it. As an aid to the army, the team of IITians has offered to use artificial intelligence (AI) to detect crowd behaviour.

The concept first gained visibility during the Army Technology Seminar-2019 in Delhi, an initiative by the Army Design Bureau to collaborate the army and the private sector for meeting the force’s requirements. Four IIT students presented how crowd analysis could be used in the prevalent situations in the J&K region, where stone pelters aim to distract the army personnels from carrying out their operations.

“Using action recognition algorithms, crowd density maps and analysis of live images coming in from CCTV cameras, it is possible to predict abnormal events including stone pelting. We think it could help the Indian Army that faces such attacks regularly in J&K,” explained S Raghav Vaidyanathan (student executive head – Centre for Innovation, IIT-Madras) to an HT correspondent.

Former army vice-chief Lieutenant General AS Lamba (retd) said innovative solutions such as AI-assisted prediction of crowd behaviour could be tried out in J&K where the situation is most difficult. “Such innovations could lead to a good solution in the long term.”