Terahertz (THz) represents the portion of the electromagnetic radiation between the microwave and the infrared region. It is within the frequency range of 0.1–10 THz, corresponding to wavelengths of radiation from 3000 to 30 µm. The advantages of the terahertz light are that they are non-invasive, intrinsically safe, and non-ionizing, along with being non-destructive.

This radiation does have some uniquely attractive qualities: For example, it can yield extremely high-resolution images and move vast amounts of data quickly. And yet it is nonionizing, meaning its photons are not energetic enough to knock electrons off atoms and molecules in human tissue, which could trigger harmful chemical reactions. Terahertz may revolutionize medical imaging, security screening and manufacturing quality control because of THz’s non-ionizing property and capability to penetrating dielectrics, fabrics and body tissue.

The terahertz (THz) frequency band is a fascinating and relatively unexplored part of the larger electromagnetic spectrum (EMS). The terahertz frequency range can be disruptive force in sectors as diverse as from medical imaging, biological research, pharmaceutical monitoring, manufacturing and quality control, and semiconductor testing to communications, and security and defence. Science and technologies based on terahertz frequency electromagnetic radiation  have developed rapidly over the last 30 years.

Being non-ionising as well as non-destructive, THz waves can pass through non-conducting materials such as clothes, paper, wood and brick, making them ideal for applications in areas such as cancer diagnosis, detection of chemicals, drugs and explosives, coating analysis and quality control of integrated circuit chips. Current application (as an imaging tool) includes non-destructive testing and quality control (QC) of various materials, including plastics, concrete, and ceramics.

Recently, THz imaging has been used in laboratory tests and security screening to examine the condition of space shuttle components, examine text in books that are too sensitive to examine physically, and to localize illicit drugs based on specific composition. Due to the power constraints, its use has been restricted to an approximate distance of 10 meters or less. THz radiation is being used to optimize materials for new solar cells, and may also be a key technology for the next generation of airport security scanners.

The key drivers responsible for the growth of this market include the increase in demand for terahertz technology-based products in the defense & homeland security and medical sectors and the high adoption rate of these products for laboratory research applications.  Increasing adoption of terahertz technology in industries such as aerospace and defence and homeland security and increasing investment in R&D activities are some of the factors that are contributing the growth of market.

Security concerns have been a major issue across the entire world. The the number of security application has been increasing that are driving the growth of terahertz market. Increasing utilization of plastic and new chemical & biological weapons by criminals is creating the need to use terahertz devices.  Security checks and surveillance have been the areas of concern in airports and other security critical places where there is a risk of terrorist attack.Companies are currently collaborating with this defense and security industry to develop sophisticated devices to detect threats. The government and private enterprises has invested a large amount of money owing to growing terrorist activity.

The growing number of applications of the technology in security applications has been the primary driving force for the growth of the market in the recent past. With increasing innovations and better imaging capabilities, security organizations are investing in upgraded devices for better performance.   Also, increased safety provided by the technology gives it a considerable advantage over existing X-ray scanners and detectors. The ability to detect different types of materials, including non-metallic substances, is helping the security sector handle threats. Handheld scanners are being deployed in airports and other public spaces for security screening. The technology is also being deployed for package scanning in airports. Growing terrorist threats around the world and increasing criminal activities are driving investments in many countries to establish security infrastructure. This is expected to aid the growth of terahertz technology in the coming years. 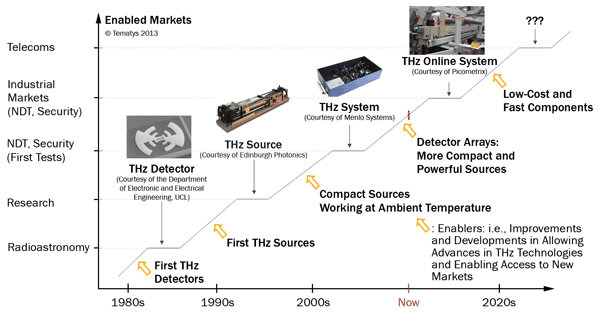 Increasing application of high-end terahertz devices in biology and medical science sectors and also high demand in research laboratory and process control monitoring processes are some factors driving the growth of market. Terahertz has shown a great potential in biomedical research owing to its unique features such as non-invasive and label-free identification of living cells and medical imaging. Terahertz technology is widely used for blood cell detection, cancer cell characterization, bacterial identification, and biological tissue discrimination that are increasing the growth of terahertz market.

Another main drivers of the growth of this market include the increasing adoption of terahertz technology-based products for laboratory research applications in various universities & research firms globally and the growing demand for these products in various cancer treatment institutes & hospitals worldwide for more informative results. In addition, the demographic factors (population), shifting consumer landscape (consumer adoption levels), and economic factors are also propelling the growth of the market.

The continuous developments in the technology due to focused research carried out in various universities worldwide create more opportunities for the adoption of terahertz technology for various new applications such as food quality inspection. However, for such researches, there is a need for more precise products. This requirement proves to be the key driving factor for the growth of the market for laboratory research applications. This market held the largest market share in 2015 and is expected to grow at the highest CAGR between 2016 and 2022.

Disruptive technologies in some sectors can face the barriers of customer skepticism and resistance from incumbents already selling into these areas. The cost of the technology is expected to fall over the coming years, owing to the high demand from the market. Thus, the adoption is expected to further grow due to emerging countries looking to upgrade security.

Overall, the technology is expected to see a huge demand in the coming years, in turn, driving the market’s growth. There has been a significant rise in the number of manufacturing companies in the developing countries, creating a huge demand for precise security systems, thus driving the growth of the terahertz technologies market. The increasing awareness about the optoelectronic approaches based on modern laser technologies as well as high-power electronic emitters help the market grow.

Industrial NDT segment is the major segment by application for the Terahertz market. This is owing to the properties that this technology has that improve various industrial operations. Terahertz imaging is widely used in aircraft, spacecraft non-destructive testing applications. In aircrafts, exterior is coated with specialty chemicals that are particularly difficult to measure. Terahertz pulses can be used to measure coating thickness once the coating gets dried. Adoption of portable terahertz scanners in aircrafts in providing the necessary information to assemble the airframe in order to ensure that parts are properly aligned is set to drive the terahertz market.

In 2019, Teratonics, a French based deep tech start-up with a proprietary technology for contactless non-destructive testing (NDT) and imaging had received a seed investment from Socomore Ventures. Growing funding activities for terahertz systems in NDT applications is set to provide opportunities for the market.

Americas dominated the terahertz market in 2019 majorly attributed to the Adoption of this technology, in initial stages. North America, being the largest market for technology-based solutions, is expected to be a strong player in the global economy, especially in the development and implementation of new technologies. Owing to terahertz being a new technology and North America being one of the earliest adopters, the market for this technology is the largest in the region. Increase in the production of helicopters and commercial aircrafts in the United States is also expected to drive the market for terahertz technology in this region. The huge aerospace industry of the United States exports more than 60% of all aerospace production. Also, there is high production and export of terahertz devices from this region for defence sector, further contributing to its dominance.

However, Asia-Pacific region is estimated to be the fastest growing region and will witness a CAGR of 30.34% during the forecast period 2020-2025. Large amount of investments as well as the research are being performed in these countries are resulting in the rapid growth of terahertz technology in this region for the coming years. The number of manufacturing companies is increasing in several developing countries, such as China, India, and Japan, in the region, which is driving the growth of the market in APAC.

China Unicom has begun research into Terahertz communication, one of the main 6 G technologies. The company, in collaboration with 20 other companies and research organizations, has formed a research organisation, the Millimeter Wave Terahertz Joint Innovation Centre. The research collaboration will create several demonstration projects and establish a dozen or more standards, helping to expand the terahertz market.

The terahertz technology market is highly competitive and consists of several major players. In terms of market share, few of the major players currently dominate the market. Terahertz market is expected to be dominated by major companies such as Advanced Photonix, Inc., Menlo Systems GmbH, Microtech Instruments, Inc., QMC Instruments Ltd., TeraView Limited, Toptica Photonics AG, Digital Barriers PLC, Advantest Corporation, Acal PLC, TeraSense Inc. among others. These major players with prominent shares in the market are focusing on expanding their customer base across foreign countries. These companies are leveraging on strategic collaborative initiatives to increase their market shares and profitability.

Product launches, acquisitions, and R&D activities are key strategies adopted by players in the Terahertz market. The companies operating in the market are also acquiring start-ups working on terahertz technologies to strengthen their product capabilities.

TeraView (U.K.) manufactures instruments that provide a reliable and robust source of terahertz light and exploit its properties to characterize a wide range of materials. The company has adopted the expansion approach to grow in the terahertz technology market; for example, in June 2014, the company established its presence in Asia by setting up a new office at Seoul (South Korea) to enhance the service, technical support, and application-specific expertise for its customers and commercial partners in the region. It has marked its presence in the market by launching TPS Spectra 3000, a terahertz imaging and spectroscopy system.

In March 2017, Luna Innovations Incorporated announced its Picometrix division, which entered into a Vendor Managed Inventory Agreement with the Chinese leading telecommunications equipment and network solutions provider. The agreement integrated Picometrix closely into the customer’s supply chain and manufacturing processes. Under the agreement, Picometrix is expected to maintain a dedicated inventory of 100G integrated coherent receivers and other future approved products, which its customer can draw into manufacturing on a “just-in-time” basis in Hong Kong.

In June 2018, TeraMetrix has launched New Products for the Non-Destructive Testing Market at ECNDT. In February 2019, Advantest Corporation completes the acquisition of semiconductor level test business from Astronics Corporation.