During UAV operations, it is necessary to continuously maintain a data link in order to send any data collected, such as video images, or audio and control links with the operator. A ground-based tracking antenna is used to follow the UAV as it flies on its route.

Moreover, if the UAV air to ground (AG) communication system uses high-frequency bands such as X or Ku bands which usually suffer from a large free-space path loss, it is difficult to operate in a wide area. Therefore, the AG communication system practically needs high-gain directional antennas which can cover hundreds of kilometers. Accurate pointing and tracking are required to ensure a maximum gain during dynamic airborne maneuvers.

The ground station antenna has to keep its main beam pointing at the in-flight UAV in order to maintain a strong video link from the UAV to the ground station. The tracking system can measure a direction of arrival (DOA) of a signal that radiates from a distant target or a reflected signal in the case of tracking Radar. The main beam of such a tracking antenna can be made to change the direction in which it is pointing by two main methods, either through mechanically rotating the antenna in space or, if the antenna is a phased array, by electronically changing the relative phasing of the array elements.

There are three major methods that can be used to track a target: sequential lobing, conical scan, and monopulse tracking.

Conical scanning takes its name from the shape that a pencil beam makes by rotating the beam around an axis. The angle between the rotating axis and the beam axis, where the gain of the antenna is greatest, is called a squint angle. The amplitude of the echo signal is modulated at a frequency called conical scan frequency.

Conical scan frequency is actually the beam rotation frequency. This modulation occurs due to the rotation of the squinted beam and the target’s offset from the rotation axis. The phase of conical scan modulation gives the location of the target. The error signal obtained from the modulated signal combines the elevation-angle error and azimuth angle error. These error signals are applied to elevation and azimuth servo motors to position the antenna. If the antenna is on target, the amplitude of conical-scan modulation is zero.

The word “monopulse” implies that with a single pulse, the antenna can gather angle information, as opposed to spewing out multiple narrow-beam pulses in different directions and looking for the maximum return.

A monopulse tracking system is used to determine the steering signals for the azimuth and elevation drive systems of the mechanically rotated antenna. Monopulse, by definition is a technique that allows for making an angular measurement in two coordinates (elevation and azimuth) based on information from one pulse. This one pulse angular measurement can be performed using the phase and/or the amplitude characteristics of a received signal on multiple channels.

Monopulse techniques are typically used in tracking radars that would have a transmitter and a receiver such that a pulse could be sent towards a target and the reflection off of the target could be received. In tracking radar systems the algorithm is done in real-time with a set of circuits that calculate the error in the bearing of the received signal and try to minimize the error.

Monopulse scanning is the most efficient and robust tracking technique. The tracking techniques discussed above need more than one signal sample, theoretically four target returns, two of which are for the vertical direction and two for the horizontal direction, to determine the tracking error. The signals returning from the target will have different phase and amplitude due to the signal fluctuations. The fluctuations in the signal results in tracking errors. As evident from its name, monopulse scanning radars use only one pulse to determine the tracking error. Using one pulse (single sample) eliminates the problem of signal fluctuation.  Several samples can be used to improve the accuracy of the angle estimate.

Amplitude comparison monopulse creates two overlapping “squinted”  beams pointing in slightly different directions, these beams are created simultaneously might be fed from separate feeds. The echo of the target is received simultaneously by both beams. The difference of the amplitudes obtained from these two beams (i.e. the difference beam) gives the angular error. If the phase of the sum pattern is compared to that of the difference pattern, the direction of the angular error is found.

The mechanically rotated tracking antenna is  required of being rotated 360° in azimuth and 180° in elevation to give hemispherical coverage above and around the ground station. 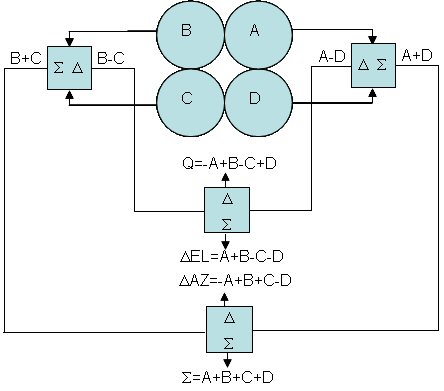 The monopulse uses four antennas (or quadrants of a single antenna). They can be horns, or sections of a flat plate array of radiators, or even subarrays of an active electrically scanned antenna (AESA) phased array. The elements are all steered together mechanically (on a gimbal) or electrically (using phase shifters in the case of AESA). The target is illuminated by all four quadrants equally.

Each of the four tracking antenna steering signals from the monopulse feed is fed through a 2.45 GHz ceramic band-pass filter (100 MHz bandwidth) and into a logarithmic detector. The logarithmic detector (LT5534) outputs a DC signal with a voltage proportional to the RF power (in dB) going into the detector.

The microprocessor generates pulse width modulated control signals for the H bridge motor speed/direction controllers. If the voltages of the two signals derived from the squinted azimuth antenna beams are equal then the microprocessor outputs a 50 pulse per second train of 1.5 millisecond wide pulses to the speed controller for the azimuth motor. This produces no drive current to the motor.

If there is an imbalance in the squinted beam signal voltages then the microprocessor varies the pulse width of the pulse train and the speed controller generates a current to drive the azimuth motor. Wider pulses cause the azimuth motor to turn the tracking antenna anticlockwise and narrower pulses cause it to be driven clockwise. A comparison of the elevation squinted beam signal generates a similar pulse train to drive the speed controller for the elevation motor.

An optical sensor is used to detect when the antenna elevation angle exceeds 90°. This is used to signal that the azimuth rotation sense needs to be reversed in the software as the two squinted azimuth beams shift from left to right and vice versa when elevation angles exceeds 90°. The control program also interacts with “out of range” micro-switches on the elevation control to stop it being driven to far in any direction. The unit can also be switched to manual control for either or both azimuth and elevation scanning.

The tracking antenna also had to rugged enough to be repeatedly assembled/disassembled. Additionally it had to be stable in an outdoor environment when exposed to gusty winds

The parabolic reflector antenna is steered to point at a UAV by a servo driven elevation over azimuth mount system.  It comprises four major parts: the azimuth turntable, the tripod supporting the elevation scanner on the azimuth turntable, the parabolic reflector and Yagi feed cluster, plus a counterweight which is required to balance the antenna in the elevation scanning.

The base plate and azimuth turntable:

The tracking antenna azimuth scan is achieved by driving a dc motor attached to the base plate of the azimuth turntable in response to the azimuth steering signals. The motor drives the turntable by a friction wheel that presses against the bottom of the turntable. The gearing ratio of the DC motor and the friction wheel to the turntable have been selected along with the torque of the motor and the necessary current capacity of the speed controller to give the motor sufficient drive to permit the required azimuth rotation speed. The turntable and whatever is mounted on it rests on three idler wheels attached to the baseplate.

Also mounted on the baseplate is the azimuth speed controller and the battery power supply for the azimuth drive . Attached to the top of the azimuth turntable are the three mounts for the tripod that supports the elevation scanner and the tracking antenna.

Array antennas, one of the continuously improving technologies, brought many benefits to our life. The superiorities of array antennas include the digital and computerized processing capabilities that can be built into them. Digital phase-shifting to form a beam is one of the best advantages of array antennas. Array antennas have electronic and rapid beam scanning ability, and they have broadband potential.

The low sidelobes and the narrow beams of the antennas give a very low signature that provides a lower probability of intercept. The low sidelobes can also minimize the mutual interference effects of the antennas among each other. Multiple, simultaneous beams can be achieved by the means of digital-beam forming (DBF). Error correction and self calibration can be done easily in the signal processing.

DBF also allows us to direct the nulls in the pattern in the direction of noise jammers, and also suppress clutter which is a cause of degradation in range. DBF also gives the opportunity to compensate for the failure of the elements in the array. Different data rates, depending on the operating environment, can be achieved with DBF. The array antennas can be used in many application such as communications, data-links, radar (search and track), and electronic warfare (EW). This gives perhaps the most important advantage of these antennas, the multi-functionality.