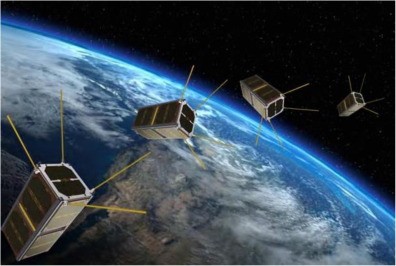 The increasing capability of small Micro, Nano and CubeSats satellites, besides its short development time, and launching cost, over traditional large satellites, leads to the trend of using MSM in Earth observation missions with different topology. These MSM topologies or categories can be classified as Satellite Constellation and satellite Formation Flying.

This category includes the MSM that depends on several satellites that are flying in similar orbits without control of their relative position, but they are organized in time and space to achieve real-time full Earth coverage. Moreover, each satellite is controlled separately from ground control stations.

This category includes the MSM that depends on multiple satellites with onboard control, which provides coordinated motion control for maintaining relative positions to preserve an appropriate topology. This topology is essential to achieve the mission objectives. Simply, it is several satellites arranged to achieve the function of a single, large, virtual instrument. Examples of formation flying are JC2Sat, FAST Microsatellite formation flying missions.

Depending on the mission application, formation flying topology can be classified as Trailing formations or Swarm.

The swarm formation consists of three or more satellites orbiting adjacent orbits. They form a virtual structure according to their mission. This topology can provide an image of the ground target from different angles at the same time moreover increasing the swath width. Each member determines and controls its positions. The concept of satellite swarms is still a new concept. Only a few missions were successfully demonstrated the swarm concept, such as ESA Swarm for Earth magnetic field monitoring  and radio telescope based on Nano-satellites in moon orbit OLFAR mission.

Swarm intelligence is a branch of artificial intelligence that attempts to get computers and robots to mimic the highly efficient behavior of colony insects such as ants and bees. As a group, simple creatures following simple rules can display a surprising amount of complexity, efficiency, and even creativity. Across countless species, nature show us that social creatures, when working together as unified systems, can outperform the vast majority of individual members when solving problems and making decisions.

• Robustness: Tasks are finished regardless if some of the agents fail.

• Self-organizing: Roles are not predefined — they emerge.

• Robustness: Tasks are finished regardless if some of the agents fail.

• Self-organizing: Roles are not predefined — they emerge.

• Adaptation: The swarm can adapt to predetermined and new stimuli.

• Decentralized: There is no central control, allowing for rapid, local collaboration.

One main challenge in artificial swarming is the design of systems that, while maintaining decentralized control, have agents capable of (i) acquiring local information through sensing, (ii) communicating with at least some subset of agents, and (iii) making decisions based on the dynamically gathered sensed data.

The use of satellite swarm offers an interesting approach to Earth observation. While there are increasing demands for border monitoring, environment pollution control, and disasters monitoring (such as, earthquake, forest fire, and flood), the traditional systems (single satellite) can’t achieve the frequent images with desirable spatial/temporal resolution needed for the analysis or provide the necessary data for “Supporting the decision making” in almost real-time.

The spacecraft used for swarm applications should be simple, small, light and can carry the required payload (earth sensor). The current cost of putting a satellite into an earth orbit is between 15,000 and 30,000 $/Kg . Consequently, Nano- and Pico-satellite systems (1–10 kg) are perfect to meet these requirements.

Space Ultra-Low Frequency Radio Observatory mission proposed by the Chinese Academy of Science aims to launch a swarm of 13 satellites, a mother ship of Micro-Satellite class and 12 deputy satellites of Nano-satellite class, this swarm is orbiting the second Sun-Earth Lagrange point (L2). Each deputy satellite will have three dipole antennas that will enable observing “all the sky all the time” in the 1–100 MHz frequency range

A Hive Mind For Weather Data

NASA wants to push the concept of swarm intelligence to new heights, adding it to a network of small weather satellites that could coordinate their actions and even change their flight paths and altitudes as needed to study weather events from multiple angles. The program is being worked on at the Goddard Space Flight Center in Greenbelt, Maryland.

The program wants to use swarms of small satellites, called SmallSats or CubeSats, in order to observe related weather phenomena occurring simultaneously around the planet and determine how they influence one another. In that way, multiple satellites working together as a swarm may be able to piece a weather puzzle together in a way that no single satellite ever could.

“We already know that Saharan dust blowing over to the Amazon rainforests affects cloud formation over the Atlantic Ocean during certain times of the year,” said NASA Engineer Sabrina Thompson, who works at the Goddard Space Flight Center. “How do you capture that cloud formation? How do you tell a swarm of satellites what region and time of day is the best to observe that phenomenon?”

According to Thompson, the answer is that climate scientists should create a set of parameters for high profile weather events and general rules that a swarm of satellites would follow when gathering weather data. Then it would be up to the swarm AI to act however it thinks is best to collect that information, coordinating multiple satellites working together to capture the most useful data as quickly and efficiently as possible.

According to NASA, different swarm designs are being considered, but in all cases the swarm AI would have a lot of control over how it deploys its individual members, and how it coordinates coverage of weather events happening around the globe. In one possible configuration, individual satellites could even use the drag force of the earth to drop to lower altitudes, which might give them a different angle on important events like the formation of rain or storm clouds.

The Space Autonomous Mission for Swarming and Geo-Locating Nanosatellites mission is an experimental mission of Teknion institute, this mission is supported by the Israeli space program. The swarm consists of three CubeSats satellite. The mission has two main goals; (1) to determine the position of a cooperative terrestrial emitter using the concept of time difference of arrival and/or frequency difference of arrival. (2) to determine the long term autonomous operation of satellite swarm, an additional goal is to perform a space qualification of a Micro pulsed plasma thruster and a new space processor