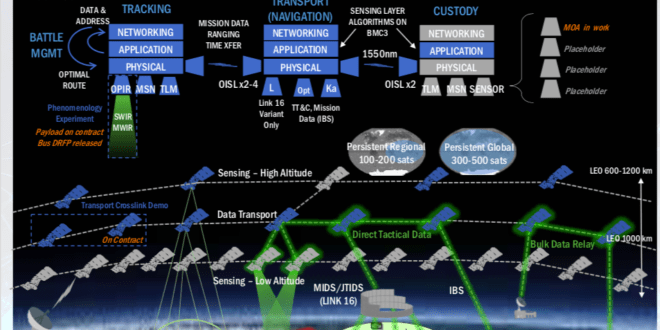 As the space domain has become more congested, the potential for intentional and unintentional threats to space system assets has increased. Space is also becoming another domain of conflict due to enhanced militarization and weaponization of space. This is driving nations whose military is highly dependent on space to launch their military space strategy to protect their space based assets. China, Russia and the US have all tested weapons that are capable of taking out a satellite, according to research by the Secure World Foundation, which records military capabilities in space.

Space Development Agency (SDA), is tasked with the development of capabilities including Global and near-real time space situational awareness, and persistent global surveillance for advanced missile targeting, and Indications, warning, targeting and tracking for defense against advanced missile threats.

The Department of Defense (DoD) relies on high-value asset early warning aircraft, such
as the Airborne Warning and Control System (AWACS) and Joint Surveillance and Target
Attack Radar System (JSTARS), or forward deployed ships with the Aegis combat system to
provide the detection and tracking necessary to guide forward tactical units to their targets on
land, sea, or in the air.

Our adversaries have made significant investments in long-range sensing capabilities as well as anti-air and anti-ship weapons, imposing costs and trade-offs such as increased stand-off distances for manned high-value assets operating in proximity to threat environments as a means of lowering risk postures. Maintaining a higher stand-off distance limits the utility of sensor systems, thus reducing their ability to support track custody.

Oversight will leverage a body of knowledge for efficient resource optimization and
apply it to the tasking of large scale, distributed and federated space systems. Oversight will
autonomously decompose a target list into tasks for each satellite such that constant custody at
scale is maintained for 1,000 targets.

Oversight will provide collaboration between satellite resources and ground-based resources for the distribution of tasking, re-tasking, synchronization, and fusion of target data within constellations. Algorithms will detect changing target behaviors and dynamically re-task appropriate sensors with each satellite node to maintain constant custody at scale.

Oversight will further enable collaboration by sharing satellite state and target state knowledge between satellite resources and ground-based resources to increase efficiency. Within the context of this BAA, constant custody is considered knowledge of target error such that accuracy is obtained as necessary based on mission needs.

Oversight will leverage existing and/or state-of-the-art networks to connect constellations
and ground resources. Oversight will minimize bandwidth needs by prioritizing and disseminating necessary data for synchronization and data fusion among other satellites. Latency
and bandwidth limitations associated with a reliance on ground-based resources will be alleviated by processing data products for targets on orbit within the constellations. Latency and bandwidth limitations will be further alleviated through operator control at the constellation level rather than burdensome individual satellite control.

Oversight is a two-phase program that seeks software solutions to enable autonomous
constant custody at scale (1,000 targets) from space through management of available hardware
resources to support both peacetime and wartime monitoring of high value targets in contested
environments, in which the resources and targets may be highly dynamic. Oversight will develop software services with solutions that can be implemented on emerging space platforms, such as new Proliferated Low Earth Orbit (p-LEO) constellations.

Oversight will develop architecture and software to enable the constant custody of target
lists to be executed at a large-scale using space assets. Current practices require human operators
for exquisite satellite solutions. This arrangement does not scale well for the numbers of targets
that Oversight is considering. Reliance on individual ground station operators significantly
increases latency and minimizes tactical utility of satellite sensor data. Oversight will develop the
automation and autonomy necessary to track targets with the operator overseeing many targets at an aggregate level. Oversight will enable operators to control space resources at the constellation
level for constant custody applications at scale.

Accordingly, proposals demonstrating innovation in resource management, task allocation, data management and dissemination are solicited. Proposed research should investigate approaches that revolutionize advances. Research that primarily results in evolutionary improvements to the
existing state of practice is specifically excluded from this solicitation.

A future solicitation may be issued in a limited competition among Track A performers
for Phase 2 (Phase 2 includes a Phase 2 Base and Phase 2 Option):
▪ Phase 2 Base: Architecture and software maturation
▪ Phase 2 Option: Live, Virtual and Constructive (LVC) Demonstration