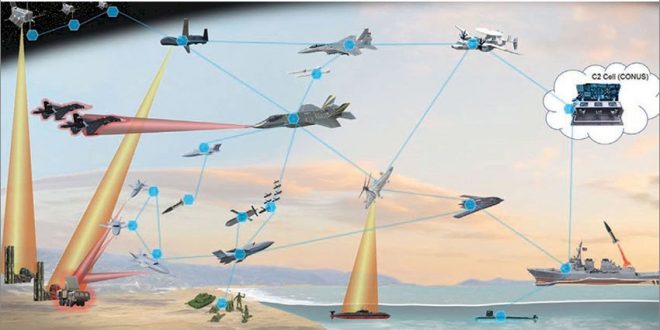 The airspace above future battlefields is expected to be increasingly congested with large numbers of unmanned aerial systems, manned aircraft, munitions and missiles filling the skies. The situation gets more complicated when considering that the usage of the airspace by all actors will increase significantly in the future, resulting in exponential growth of airspace operations. During the forecast period 2019 to 2026, for example, the usage of UAVs in military operations as well as civil and commercial applications, is expected to grow at a Compound Annual Growth Rate (CAGR) of 15.8%. This will require revised airspace management focused on an innovative approach that can guarantee dynamic, real-time airspace coordination while ensuring an adequate level of traffic de-confliction.

Robust Anti-Access and Area-Denial (A2/AD) structures, coupled with the proliferation of advanced technologies across multiple domains, will dominate the third dimension in the coming decades. Potential adversaries will blend conventional, asymmetric, and hybrid capabilities across each of the traditional physical domains (Air, Land and Maritime) plus Cyber and Space, and will adjust their strategies by utilizing these advancements in an attempt to overwhelm NATO’s strengths. This could compromise NATO’s freedom of manoeuvre, reduce its effectiveness in deterring potential aggressors and undermine stability along the Alliance’s borders. A more comprehensive approach is needed for correctly dealing with these security threats, and effectively operating in this type of ‘multi-domain environment’.

Futuristic hypersonic weapons, which promise to cross more territory in a shorter time, will break the traditional norms of long-range weapons, including the maximum altitudes reached. Furthermore, it has to be considered that changes in the A2/AD environment coupled with adversary advancements in Cyberspace and the electromagnetic spectrum, will limit the use of conventional aircraft tracking systems and will drive the growth of demand for stealth platforms. Managing airspace in the near future will become more complex than it is today, writes Lieutenant Colonel Livio Rossetti, IT A, JAPCC.

It will be fundamental for NATO to develop new strategies that allow a more integrated and synchronized use of forces which can outmanoeuvre adversaries across multiple domains at speed. Recently, there have been numerous papers, studies, and articles proposing a new way of viewing the future battlespace. The previous United States (US) Air Force Chief of Staff (CSAF) General David L. Goldfein, recently summarized his vision in a simple comprehensive concept ‘Victory in future combat will depend less on individual capabilities and more on the integrated strengths of a connected network available for coalition leaders to employ’. It is time to embrace a transformation process that leads NATO forces to effectively conduct joint operations across all domains. This will drive the need for advanced Command & Control (C2) systems able to properly connect, integrate, and synchronize forces, regardless of their service or domain affiliation. Systems that can guarantee future commanders the possibility to ‘consider all domains from the beginning of the planning process and be empowered to coordinate dynamic all-domain retasking throughout execution’

Anticipating the future vision of airspace management which is able to face such a complicated scenario, DARPA launched a new initiative for a programme named Air Space Total Awareness for Rapid Tactical Execution (ASTARTE). ‘The goal of the ASTARTE Program is to provide real-time, low-risk de-confliction between airspace users and joint fires to enable support to tactical units and build a resilient air picture under an A2/AD bubble while conducting JADC2 operations … It will interoperate and coordinate with existing C2 systems to ensure airspace users and operators have the most current and relevant information available.’

To de-conflict airspace activities of friendly forces and rapidly counter an enemy’s actions on the battlefield requires new technologies to effectively integrate effects from all domains. DARPA announced its Air Space Total Awareness for Rapid Tactical Execution (ASTARTE) program, which is being conducted in partnership with the US Army and US Air Force.

The program’s goal is to enable efficient and effective airspace operations and de-confliction in a highly congested future battlespace. This capability is especially critical for implementing DARPA’s Mosaic Warfare concept, which calls for seamless co-ordination across a complex web of aerial, ground and sea nodes providing firepower and other effects to overwhelm an adversary.

Even if only focused on the airspace above an Army Division, (a block of airspace approximately 100 km by 100 km, from the ground up to 18,000 feet) DARPA leads the way for a project that, if fielded, could radically change the current concept of airspace management and make a difference in planning, and conducting future battle strategies.

Paul Zablocky, program manager in DARPA’s Strategic Technology Office, said, “ASTARTE aims to provide a real-time, common operational picture of the dynamic airspace in the most complex and challenging adversary anti-access/area denial, or A2/AD, environments.” ASTARTE will focus on the most challenging airspace problem – the airspace above an Army Division operating under an enemy’s A2/AD bubble. This volume of airspace can contain Army, Air Force, Navy, Marine Corps, Special Operations Forces, coalition and adversary manned/unmanned aircraft, and munitions.

ASTARTE does not seek to develop a common framework of software and hardware that Joint and Coalition partners would have to acquire. The new ASTARTE engine will be designed for compatibility with existing and future command and control systems (C2) used by the military Services, and will automatically push the most current and relevant airspace information to all Joint units on their native C2 systems.

ASTARTE is part of DARPA’s Mosaic Warfare program to create next-generation systems to support and expand Joint All Domain Command and Control (JADC2). The Mosaic Warfare concept envisions the individual capabilities needed to fight an all-domain battle — sensors, shooters, command and control networks, etc. — as mix and match “tiles” that can be used to build a “mosaic” battle plan, according to DARPA’s website. Think “kill webs,” not kill chains. Instead of exquisite platforms like the B-2 bomber, think exquisite functional technology nodes (such as an advanced infrared sensor) configured on the fly using AI tools. Think building a LEGO spaceship not from a kit with a blueprint, but free-form from a drawer of jumbled pieces.

The operating principle of these new battle and airspace management initiatives is mainly based on the possibility offered by leveraging technologies to connect all the available sensors and to process the related data by using artificial intelligence. The Director of the JAPCC and Commander, Allied Air Command, (Ramstein Air Base, Germany), General Jeffrey L. Harrigian, warns, that ‘sensors exist across every domain, but connecting those sensors remains challenging’. The current situation, in NATO, contains a plethora of different systems, and sensors, that do not guarantee an adequate level of interoperability.

ASTARTE promises to solve this issue by adopting new algorithmic solutions designed with an Application Programming Interface (API) that enables easy integration and interoperability with the full range of currently existing US military C2 Systems. Perhaps, the moment has arrived for the Alliance, to make wide-ranging holistic political-military changes that can address and solve the long-standing problem of interoperability, keeping in mind that ‘interoperability does not necessarily require common military equipment. What is important is that the equipment can share common facilities, and is able to interact, connect, and communicate, exchange data and services with other equipment.’ DARPA’s initiative with the ASTARTE project aimed at obtaining an API that integrates and makes the different C2 systems currently in use interoperable is undoubtedly something that deserves to be sponsored and supported.

The objective of the ASTARTE program is to provide real-time, low-risk joint de-confliction between airspace users and joint fires at an
Army Division-level to enable responsive support to tactical units and build a resilient air picture in an Anti-Access/Area Denial (A2/AD) environment while conducting Joint All-Domain Command and Control (JADC2) operations. ASTARTE will develop a virtual and live testbed for airspace management systems, a series of algorithms for airspace planning and operations, and a sensor network for delivering real-time spatial and temporal tracking of airborne platforms. Together, these elements will perform all aspects of sensor tasking, data processing, multi-modal data fusion and near-real time dissemination to enable dynamic spatial and temporal airspace management and operations.

The ASTARTE program will focus on three technical areas:

TA-2) Sensors that can detect and track, in real-time, aircraft (manned and unmanned), airborne weapons, and other potential flight hazards such as unmanned balloons or other hazards to safety of flight in an A2/AD environment.

TA-3) Virtual Lab Testbed development that allows for the modeling, simulation, and virtualization of current joint military airspace management systems, operations and ASTARTE technology, with interfaces to connect real-world hardware and software, leveraging a common software framework that supports both the virtual and real world environments.

DoD’s future-tech agency recently awarded two contracts for Phase 1 of the Air Space Total Awareness for Rapid Tactical Execution (ASTARTE) project: one last week to Raytheon for $7.6 million; another to Systems and Technology Research (STR) on Dec. 29 for $8.3 million.

Systems and Technology Research has won an $8.3M contract to help the Defense Advanced Research Projects Agency study, develop and trial a testing environment in support of a program that aims to ensure effectiveness of airspace operations in future battlespace. The sought environment will serve as a testbed for airspace management systems, airspace planning algorithms and a network of aircraft-tracking sensors under DARPA’s Air Space Total Awareness for Rapid Tactical Execution program, the Department of Defense said in Jan 2021. STR will perform 58 percent of work under the initiative’s airspace deconfliction via integrated sensing and efficient replanning effort in Woburn and Lexington, Massachusetts. Other work locations are in Orlando and Melbourne, Florida; Niskayuna, New York; and Boulder, Colorado.

All modern personal computers including desktops, notebooks, smartphones, and tablets, are examples of general-purpose computers. …