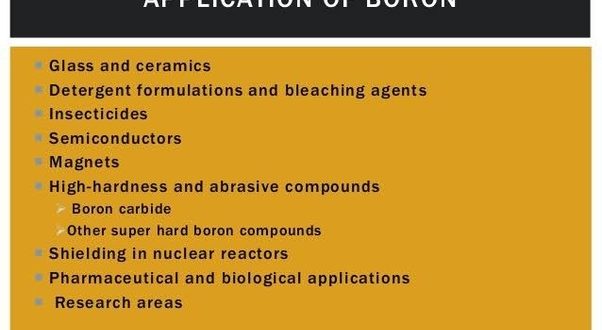 Boron is a compound that occurs in nature. It is often found combined with other substances to form compounds called borates. Common borate compounds include boric acid, salts of borates, and boron oxide. Several companies in the United States produce most of the world’s borates by processing boron compounds. Borates are used mostly to produce glass. They are also used in fire retardants, leather tanning industries, cosmetics, photographic materials, soaps and cleaners, and for high-energy fuel. Some pesticides used for cockroach control and some wood preservatives also contain borates.

Natural boron exists in 2 stable isotopes however pure boron is hard to prepare due to contamination by different elements. It is also found for applications including ceramics, high-hardness or abrasive compounds, metal coatings, detergents, bleaching agents, insecticides, semiconductors, magnets, wood preservatives, and an additive in glass fibers of boron-containing fiberglass for insulation and structural materials. Boric acid contains antiseptic, antifungal, and antiviral properties thus it is used as a water clarifier in swimming pool water treatment.

Boron and its compounds are considered as most promising candidates to be used as hydrogen storage and production material. Therefore, the importance of boron increases for hydrogen and fuel cell energy technologies. Hydrogen can be produced by sodium borohydride giving no harmful by-products. Boron is also a potential engine fuel and engine fuel additive due to its high combustion ability.

One of the basic requirements associated with the development and operation of nuclear reactors is control and containment of neutrons that sustain, and are also produced during fission reaction. Boron is one of the few elements to possess nuclear properties, which warrant its consideration as neutron absorber material.

Boron carbide and refractory metal borides in addition have an attractive combination of properties such as low density, high melting point and hardness, chemical inertness and excellent thermal and electrical characteristics making them potential materials for many advanced applications.

Born carbide is also being used to make bulletproof jackets. ET has found that 40% of the jacket material, comprising fabric and boron carbide powder, are being imported from China. Chinese companies are now the main overseas raw material source for the 180,000-jacket order after Indian company SMPP changed its suppliers after winning the bid in April last year. The order has been described by the government as one of its biggest contributions for soldiers who have been denied similar jackets in the past.

The biggest of the four suppliers – Beijing Protech New Material Science Company Ltd – said in its profile that the company was started in 2003 and that its products have been certified by the Chinese government. A listing on Chinese portal Alibaba showed that 45% of its exports are to the Middle East and 10% to Southeast Asian companies.

Some of the actual applications of boron and its compounds in Indian nuclear industry are as follows: Boric acid is used as poison in moderator/coolant of research reactors. Boric acid and boron carbide powder have been used in concrete while constructing reactor buildings

Speaking at the groundbreaking ceremony of the state-run mining firm ETI Maden’s Boron Carbide Facilities in northwestern Balıkesir province, the minister said Turkey holds 73% of the world’s boron reserves, controls about 59% of the boron market and wants to boost these numbers by effectively refining the resources.

He noted that they established the TRBOR Boron Technologies A.Ş. with the participation of ETI Maden to produce around 1,000 tons of boron carbide annually.

Touching upon the multiple uses of boron in the defense industry, glass and ceramics sectors, farming and cleaning products, Dönmez said Turkey will consolidate its leadership through the effective use of technology. The boron carbide that will be produced at the facilities in Balıkesir will have low density and will contribute to making helicopters, aircraft, military equipment and more.

Laptops, cell phones, and other electronic items generate heat during use, which can reach critical levels, slowing down operation or leading to complete failure. Large data centers, for example, have to expend a significant portion of energy usage on effective cooling systems. Managing unwanted heat is now a bottleneck in the development of smaller and more powerful electronic systems and new materials that can conduct and dissipate heat more effectively are urgently needed.

In three separate reports published in Science, researchers have confirmed a theoretical prediction made some five years ago that the semiconductor boron arsenide (BAs) should have an unusually high thermal conductivity, which could help keep the next generation of electronic and optoelectronic devices cooler.

Researchers from the University of Texas at Dallas, University of Illinois at Urbana-Champaign, and University of Houston measured thermal conductivity levels of 1000 ± 90W/m/K at room temperature in millimeter-scale BAs crystals using a technique called time-domain thermoreflectance (TDTR)

What all the researchers are certain of is that the future is bright for BAs as a thermal conductor to dissipate unwanted heat and enable better performance from electronic and optoelectronic devices. “BAs has great potential for the future of electronics,” says Lv. “The close match between the thermal expansion coefficients of BAs and Si will be an advantage in minimizing thermal stresses and reducing the need for thermal interface materials.”

From touchscreens to wind turbines, boron is used as a vital component in their manufacture. The global boron market is prognosticated to achieve growth on the back of the rising penetration of fiberglass in markets that are traditionally held by steel and concrete. It is anticipated to gain from the increasing application of fiberglass in turbine blades used for generating wind power. The swelling demand for electronic products is also expected to drive the market growth.

The report includes key applications of boron, viz. detergents, agriculture, ceramics, glass, and others. Among these, glass and ceramic are expected to generate robust demand for boron. However, glass is foreseen to take the lead in the global market in terms of demand. In 2017, it accounted for a substantial consumption share of the global market.

Players are foretold to take advantage of new opportunities created as a result of the high fiberglass demand in the construction of public structures such as roads and bridges. Thus, increased construction spending is expected to push the demand in the global boron market

@Rajesh Uppal@idstch
Previous Extreme Battery technologies that are fire proof, work in ultra-low temperatures of Arctic, at high altitudes, and in space
Next Propulsion motors are enabling stealthy warships and submarines  propelled with an electric propulsion system